There have been several stocks that have doubled over the past year alone. For example, NVIDIA has produced a 127% return over the past 12 months, much to the delight of its investors.

However, it's unrealistic to buy stocks because you think they're going to make you rich right away. Trying to time the market is almost always a losing battle. It's far better to look for stocks that will produce consistent performance and will double your money in a reasonable period of time, and then do it again and again. With that in mind, here are three real estate investment trusts that have doubled investors' money over the past five years or less, and could repeat the process over and over again for decades to come. In fact, the first two REITs mentioned here are among the largest holdings in my own portfolio. 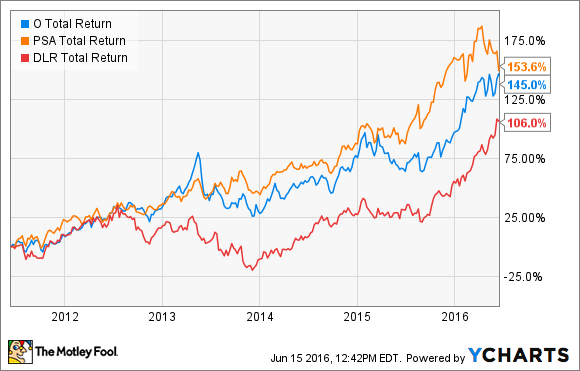 Digital Realty has performed extremely well thanks to the exponential growth of the need for data storage. As of the end of the first quarter, Digital Realty owns 140 data center properties consisting of 26 million rentable square feet, whose tenants read like an all-star list of tech companies with IBM, Facebook, AT&T, LinkedIn, and Oracle among the company's 10 largest.

According to Cisco's forecast, the boom in data traffic isn't over just yet. To the contrary, global IP traffic is projected to grow at a 23% annualized rate through 2019, while cloud and mobile data usage is expected to grow even faster. And all of this data will need to be stored somewhere.

There are other reasons to have a positive outlook on Digital Realty. The recent Telx acquisition created opportunities to lease out several underoccupied properties, tenant retention is stronger than other types of real estate, and debt levels are conservative. Digital Realty has grown its FFO at a 14% annualized rate over the past decade, and as a result, has been able to increase its dividend by more than 250% since 2005. There is no reason to believe this can't continue for the next decade and beyond.

Not only has Realty Income produced strong returns over the past five years, but the retail REIT has averaged a 17.8% total return throughout its entire 22-year history.

It achieves this level of performance through a combination of factors. First of all, the company acquires properties in extremely desirable areas, where real estate values generally grow at higher-than-average rates. And, the majority of properties are freestanding single-tenant retail buildings, occupied by tenants with business models that work in any economy, such as service-oriented businesses like fitness centers, low-price businesses like dollar stores, and non-discretionary businesses like drug stores and gas stations.

Also, tenants sign 15-20 year net leases, which requires them to pay taxes, insurance, and building maintenance. Annual rent increases are typically built into the lease, so income growth is quite predictable. In fact, because of the rock-solid income stream, Realty Income just declared its 86th dividend increase since its 1994 IPO.

Yes, I'm talking about the company with those big orange storage facilities. Public Storage is the undisputed leader in self-storage real estate, and is actually larger than its next three leading competitors combined.

The self-storage business has been performing well in recent years, hence the excellent stock performance. Occupancy is at an impressive 93.9% level, and rental income per occupied square foot has increased by more than 6% in the past year alone.

The self-storage business is also pretty recession-resistant. For one thing, even in bad economic times, many people still need a place to put their stuff. In other words, a storage unit is a non-discretionary expense for lots of people.

In addition, self-storage is a relatively cheap type of real estate to operate with significantly lower maintenance and turnover expenses than most other types. In fact, Public Storage operated at a 72.4% gross margin during the first quarter of 2016, and has previously said that it could break even with just 30% occupancy. How's that for a margin of safety?

Most successful investors don't have a "get rich quick" mind-set, so I'd advise you to not read too much into a stock's performance over a single year. Instead, focus on stocks that can deliver strong performance year after year, and can double your money many times over long time periods.