Stocks enjoyed their best week of the year last week as the Dow Jones Industrial Average (^DJI -0.38%) and the S&P 500 (^GSPC -1.03%) each rose by more than 3%. The surge nearly wiped away all of the declines from the Brexit shock and pushed indexes back into solidly positive territory on the year: 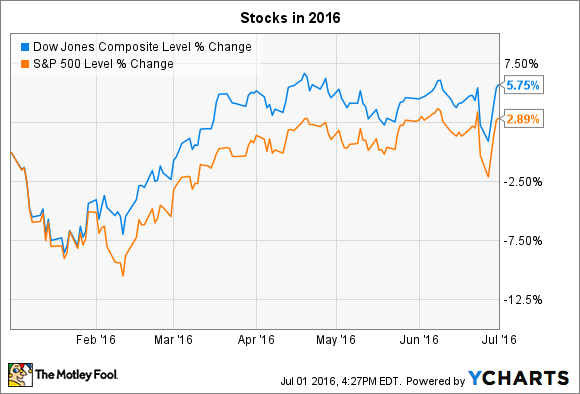 The key economic news of the coming week will likely arrive Friday when the government announces official job growth figures for the month of June. In the meantime, Pepsi (PEP -0.50%) and PriceSmart (PSMT -0.35%) stocks could make notable moves following their quarterly earnings reports.

Thursday, July 7: Pepsi's got some news

Pepsi is due to report its quarterly earnings results before the market opens on Thursday. Shares have moved in lockstep with beverage rival Coca-Cola (KO -0.75%) recently, despite the fact that Pepsi is posting stronger overall growth: It boosted organic sales by 4% last quarter, compared to a 2% uptick for Coke.

The Frito-Lay segment of the business has been a standout lately as new products like reduced-fat Doritos and gluten-free Quaker Oats prove popular. "We feel pretty good about our portfolio transformation effort," CEO Indra Nooyi told investors in April. That division enjoyed 4% higher sales (compared to just 1% on the beverage side) while falling costs helped produce a 10% jump in operating profits. As for the rest of the year, Pepsi executives have targeted 4% overall growth, but that forecast could change as they incorporate the latest data on market strength and foreign currency swings.

PriceSmart, which operates warehouse clubs in Latin America and the Caribbean, posts earnings after the market closes on Thursday. Results have been wracked lately by an extremely weak Colombian market. The country has endured a major currency devaluation that, besides sending reported sales and membership income plunging, has pushed prices for many products far outside of customers' reach. As a result, comparable-store sales there fell 7% even when measured in the local currency.

CEO Jose Luis Laparte and his executive team aim to get that figure to break-even over the next few quarters, which would help PriceSmart's overall comps return to positive territory. In the meantime, investors can expect continued weak overall growth and more pressure on the retailer's bottom line as its prices decline enough to keep Colombian shoppers engaged. Consensus estimates peg revenue of $706 million, or just 1% above the prior-year result. Earnings should tick up slightly from $0.75 per share to $0.77 per share.

Friday, July 8: The health of the job market

The week ends with the most anticipated economic publication of any given month: the Labor Department's Employment Situation report. This round of jobs figures is even more important than most, given the impact it's likely to have on the Federal Reserve's thinking about the economy, and thus on the pace of interest rate hikes to come.

Last month showed a surprising slowdown in payroll gains: Just 38,000 new jobs were created, compared to the 200,000 monthly pace we've seen over the last year. Friday's reading will give the Labor Department an opportunity to revise that initial figure, as it often does. The updated three-month pace that's evident from this release should help clear up confusion on whether the job market is strengthening or weakening.

Demitrios Kalogeropoulos has no position in any stocks mentioned. The Motley Fool owns shares of and recommends PepsiCo. The Motley Fool recommends Coca-Cola and PriceSmart. We Fools may not all hold the same opinions, but we all believe that considering a diverse range of insights makes us better investors. The Motley Fool has a disclosure policy.

Is Pepsi an Excellent Defensive Dividend Stock to Buy in 2023?
420%