One financial metric that matters to investors is the ratio of operating expenses to revenue. The lower this is, the (arguably) more efficient a company is with its spending. During Apple's (NASDAQ:AAPL) meteoric rise in the wake of the successes of the iPhone and, to a lesser extent, iPad, the company's operating-expense-to-revenue ratio bottomed at sub-10%. 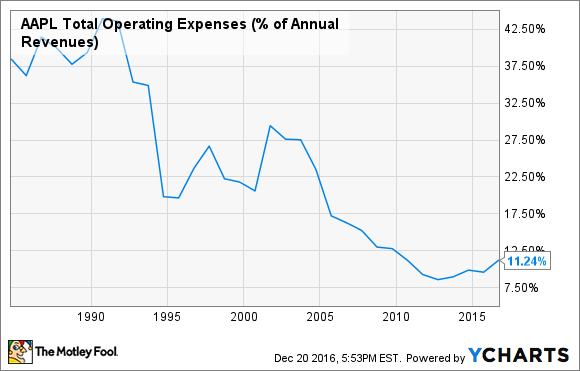 That nadir came even as the company's investments in research and development (R&D) and sales, general, and administrative expenses (SG&A) multiplied in the span of a decade -- Apple's revenue growth was just that fast. 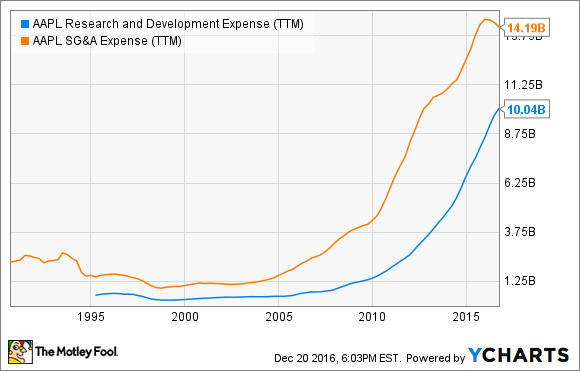 Apple's operating expense efficiency is still best-in-class among its peers, but as Apple's growth slows and the costs to build next-generation products rise, that efficiency is clearly eroding.

Though some of the decreased efficiency in Apple's spending is clearly attributable to a natural inflation in product development costs, a recent piece published in Bloomberg suggests that the company's fundamental product development methodology has become less efficient over time.

As you'll see shortly, part of the decline in Apple's R&D efficiency may be due to the company taking steps to minimize the risks associated with developing technically challenging new products.

"In recent years, Apple managers have also become more likely to float two or more competing ideas, meaning designers and engineers must work on more than one concept at a time," writes Bloomberg's Mark Gurman.

He further goes on to quote a "person familiar with the matter" as having said that Apple's engineers are "asked to develop multiple options in hopes that one of them will be shippable."

As a concrete example, Gurman reports that Apple "tested two primary prototypes" for the 12-inch MacBook that launched back in early 2015 -- a heavier one and a lighter one.

This appears to be an example of Apple trading R&D efficiency for risk mitigation; Apple presumably had to pour more R&D dollars into developing the two prototypes rather than just going all-in on one version. And, to top it all off, the money and effort spent on the model that didn't get shipped goes totally down the drain.

If Apple spends those kinds of resources on such risk mitigation efforts on the Mac (roughly 10% of Apple's revenue), then the amount that Apple probably spends on developing multiple iPhone models (Apple's revenue and profit depend heavily on the iPhone product line) is likely mind-boggling.

Apple's all grown up now

Apple is the largest technology in the world by market capitalization as of this writing, and easily the most profitable. It pays a hefty dividend, too. It's practically the very definition of a blue chip stock.

As such a company, it needs to be very responsible in the risks that it takes. With the iPhone product lineup, Apple must release new phones each fall with little margin for error. This means that if the company wants to try crazy new things that might not pan out in time for release, it had better have several lower-risk options in the works as well.

By having those alternative "fallback" options, Apple is doing what it can to minimize the risk of potential show-stoppers that could substantially impact revenue and operating profits. In return, though, Apple needs to spend more on product development than it would otherwise without such a "safety net" in place.

But, at least to this Fool, that safety net is well worth the price.