U.S. water utilities American Water Works (NYSE:AWK) and Connecticut Water Service (NASDAQ:CTWS) both have dividend yields hovering around 2%. Their businesses, meanwhile, are roughly similar... Each helps ensure we have clean water to drink. But which one is the better buy? In this case, I think the winner is the utility with the shorter streak of annual dividend increases.

Not quite so impressive a record

Connecticut Water Service has increased its dividend annually for 48 consecutive years. That's an incredible streak that few companies of any kind can claim to have achieved. But there's a couple of problems to think about.

For starters, the utility's annualized dividend growth over the past 10 years was just 2.7%. The number has been higher lately, with the trailing year increase at around 6%. But overall, mid single digits is probably the best you can hope for here based on historical trends. And a worst case scenario is low single digits, which might mean falling shy of inflation. If a dividend doesn't at least grow at around 3% annually, approximately the average for inflation, your buying power is shrinking. So, despite a long string of annual hikes, dividend growth isn't a huge selling point here. 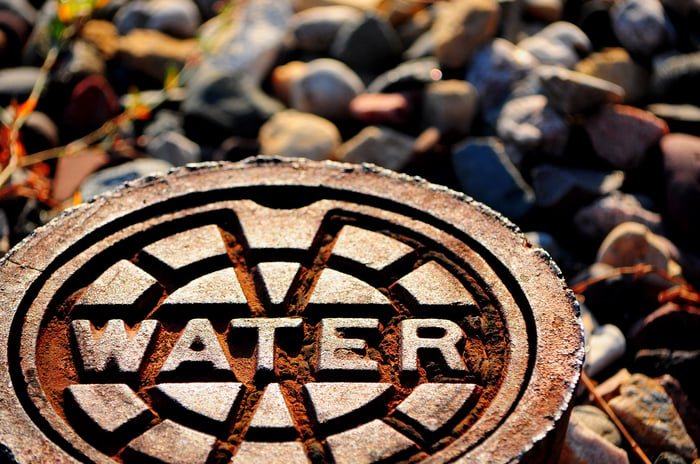 Another factor to consider is Connecticut Water Service's small size. The market cap is $600 million. That alone doesn't make it good or bad, but when you consider that it's a utility dealing with regulated markets, size and scale are important ways to spread costs. Its small size also limits its access to the capital markets for the funding needed to consummate the acquisitions that spur growth in the fragmented water sector. And the utility only operates in two states, its namesake Connecticut and Maine, which further limits its acquisition options. 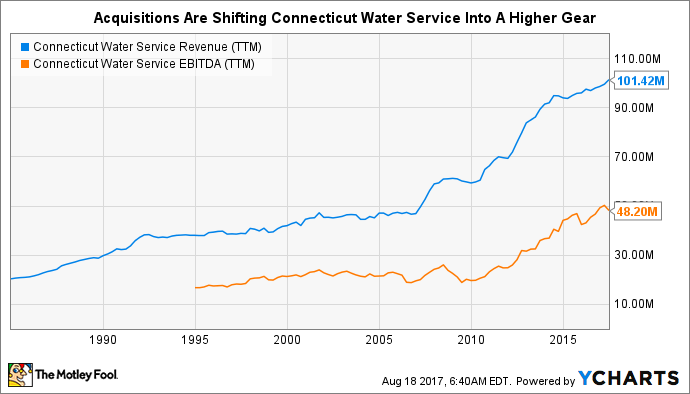 To be fair, growth has kicked up lately. Of the 60 or so acquisitions the company's made in its history, roughly 40 have come in the last seven years. You can see the impact the uptick in acquisitions has had on the company's results in the chart above, which also helps explain why the utility has been able to increase the dividend at a higher rate recently.

But overall it still lacks material scale. Yes, small acquisitions can have a big impact on the business, but Connecticut Water Service can only consider small-scale purchases because it simply couldn't manage a large one.

The other side of the spectrum

And then there's American Water Works. This water utility doesn't have the dividend history of Connecticut Water Services, but it has increased the dividend each year since becoming a stand alone public company again in 2008. Between 2003 and 2008 it was a subsidiary of Germany's RWE AG, so it really couldn't have the same history even though annual dividend growth is clearly important to management.

While American Water Works' dividend history is short relative to that of Connecticut Water Service, its dividend growth has been far more robust. Over the trailing 1-, 3-, and 5-year periods American Water Works' dividend has increased roughly 10% on an annualized basis. That's over three times the historical rate of inflation, and means that investors have seen the buying power of their dividends expand far more than have Connecticut Water Service's investors. 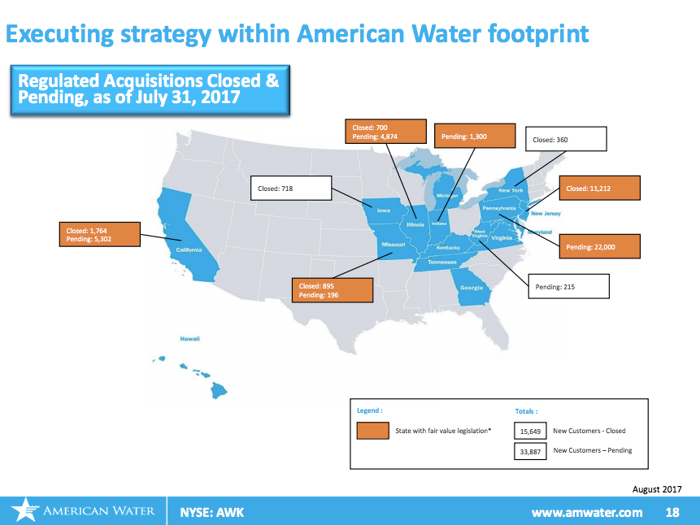 Backing up that dividend is American Water Works' vast scale. It's a $14 billion market cap company with operations across 16 states. Instead of looking for tiny bolt on deals in two markets like Connecticut Water Service, American Water Works has 16 markets to consider, and the scale to add new markets if the opportunity presented itself. Take a look at the graphic above -- American Water Works has nine deals pending or recently closed in nine different states. It needs more deals to move the needle because of its size, but it has more access to deals because of its size and reach.

Slow and steady, plus some

Growth at American Water Works and Connecticut Water Service will ultimately come from two places. First is investment in their regulated businesses, which will allow them to increase the rates they charge (assuming the approval of regulators, of course). The next big lever after that, however, is acquisitions. Although Connecticut Water Service has an incredible history of annual dividend increases, American Water Works has been able to reward shareholders with larger dividend increases because it's a bigger and more diversified company capable of handling more and larger acquisitions. I would go with American Water Works at this point.