Two of the most important companies in the payments processing space are cagey veteran American Express (NYSE:AXP) and energetic upstart Square (NYSE:SQ). That's one reason I've jumped on the chance to match the two in a Battle of the Stocks contest on several occasions.

The last time I did so, at the end of 2017, I raised Square's hand in victory. Things are moving fast in the financial industry these days, though. Let's see if the young buck can claim another win in a fresh bout between the two. 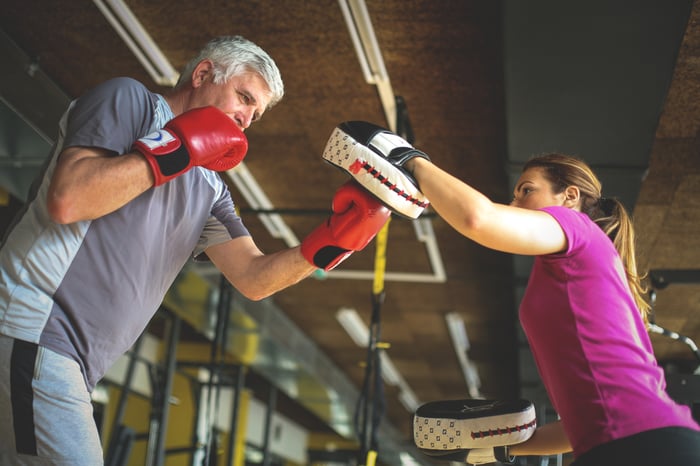 If not the scorching hot financial-sector company of the moment, Square is certainly near the top of the list. Several consecutive quarters of beating estimates with high growth in its top and bottom lines will tend to do that to a stock.

There's the Caviar takeout-ordering platform for restaurants; the helpful Instant Deposit feature for enterprises; and Square Capital, a small-business funding unit. Each is a clever add-on that has complemented the company's core operations, and widened the Square ecosystem. A restaurant already using the company's payment platform, for example, will find it's easy to adopt Caviar as an ordering and delivery backbone.

These new offerings are making a difference. One interesting statistic in the company's Q4 earnings report is that the products introduced since 2014 comprised 36% of the company's adjusted revenue for the quarter. That was 11 percentage points higher than their contribution only one year ago.

All in all, subscription and services' growth is snowballing. In Q3, the category's revenue rose by 84%; in this most recent quarter, that figure leaped to 96%.

AmEx, meanwhile, is humming along nicely, if not at the accelerated pace of Square. It's carved out a solid path for growth by improving the perks for its cardholders, which helps retain customers and attract new ones. It's also prioritized loan growth, with the happy knock-on effect of higher revenue from interest charges; this rose 13% in 2017, using a year-over-year comparison.

AmEx is devoting a lot of effort, not to mention capital, to get people to use its cards more. In Q3 of last year, for example, it boosted its spending on card "member" rewards by a beefy 21%, to $1.9 billion. This seems to be having the desired effect. For the entirety of the card giant's fiscal 2017, total spending increased by 8%, followed closely by 7% growth in card fees.

AmEx still hasn't fully recovered, in terms of profitability and revenue, from the Costco divorce. But it's making smart moves that are clearly inspiring cardholders to reach for their AmEx plastic more frequently. These efforts should continue to bear fruit, and keep the fundamentals heading north.

So in a nutshell, what we have here are a very dynamic young company opening new fronts for revenue improvement, and a long-established player on a sensible, if not exciting, growth path.

Of the pair, AmEx is the safer pick -- it's a proven and reliable moneymaker, with annual net profit margins that typically land in the mid-teen percentages. It's also the one that pays a dividend, which at a 1.5% yield isn't earthshaking, but is far higher than its rivals.

All things considered, I'd tap Square, even though its scorching growth has attracted legions to the stock, cranking up its price considerably (it's up a dizzying 216% over the past year, compared to AmEx's 20%).

Current analyst estimates put its forward P/E at nearly 72, an awfully high number (and considerably richer than AmEx's 12). However, I think it can exceed that growth rate. Take-up of its anchor cash-register system should keep rising nicely, while some of those other revenue streams have only started to flow, and new ones will doubtless be introduced before long.

While AmEx is a good, solid company, I very much doubt it'll grow at anywhere near the pace of its youthful rival. Square is rising very fast as an enterprise, and its stock is worth the money even at this elevated level. I'm readily picking it as the winner in this round of the fight.