CBL & Associates stock climbed after the company announced that it plans to file for bankruptcy protection. Investors shouldn't be tempted to buy.

Mall owner CBL & Associates (CBLQ) has been struggling for years. As a result, it has been teetering on the brink of bankruptcy ever since the COVID-19 pandemic hit the United States.

Last Wednesday, the REIT acknowledged the inevitable. CBL issued a press release stating that it had entered a restructuring support agreement with a majority of its unsecured debt holders, calling for the company to file for bankruptcy protection by no later than Oct. 1. CBL stock jumped after this announcement, although it gave up most of its gains by the end of Thursday. 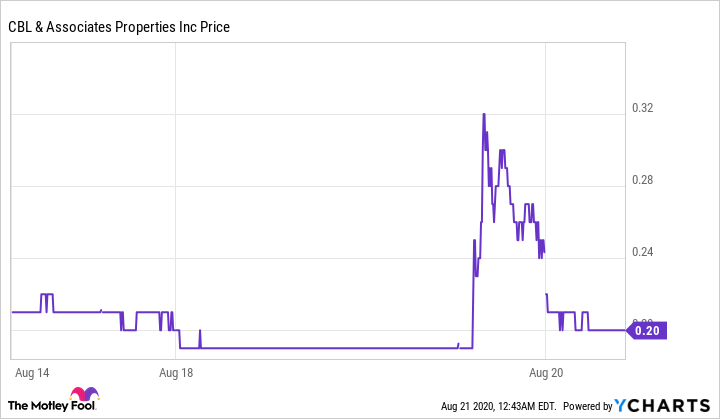 Share price surges for companies declaring bankruptcy have become surprisingly common in 2020. This particular bounce was less irrational than many, as CBL indicated that current shareholders will still own a piece of the company post-bankruptcy. Nevertheless, investors should continue to steer clear of CBL.

A plan to cut debt

CBL's net operating income (NOI) has been in free fall in recent years, because of the well-known headwinds assailing enclosed malls, particularly the low- and mid-tier properties that make up most of CBL's portfolio. While the company has been trying to reduce its debt, it was a case of too little, too late. The goal of filing for bankruptcy protection is to reduce CBL's obligations in order to put the REIT on a sustainable footing.

The restructuring support agreement calls for exchanging the company's nearly $1.4 billion of unsecured debt for $50 million in cash, $500 million of debt with a 10% coupon (secured by CBL's remaining unencumbered properties), and 90% of the equity in the reorganized company. This move would reduce the company's debt by almost $900 million.

The bankruptcy process would also eliminate CBL's preferred stock (with a face value of over $600 million) in exchange for a small amount of new equity. However, given that CBL had already suspended dividends on its preferred shares late last year, this move is less consequential.

The bottom line for shareholders (or potential shareholders) is that holders of CBL's common and preferred stock will split a 10% stake in the reorganized company. The exact details of that split are still being negotiated. They will also receive warrants that would give them a greater share of CBL's new equity if the unsecured creditors recover most or all of their principal. The business headwinds are phenomenal

A smaller debt load will improve matters for CBL, but it won't fix the underlying problems with the business. In recent months, three of CBL's top 25 tenants have filed for bankruptcy protection: Ascena Retail, J.C. Penney, and GNC. Numerous other noteworthy mall-focused retailers have also declared bankruptcy. Many key CBL tenants that haven't declared bankruptcy plan to downsize significantly over the next few years, particularly by closing stores in low-productivity centers like many of CBL's malls.

As a result, CBL expects adjusted NOI for its core properties to fall to $450 million in 2021 from $547 million for those same properties last year. Even that seems ambitious in light of the ongoing waves of pandemic-related bankruptcies and store closures. If NOI keeps falling, CBL could eventually run into trouble supporting its debt load once again.

Crucially, when anchor tenants like department stores close, a mall's smaller interior tenants can often invoke co-tenancy clauses entitling them to lower rent or even an early termination option. CBL still has more than 130 department stores open across its top four anchor tenants -- one of which is bankrupt (J.C. Penney) and one of which has an awful Caa1 credit rating from Moody's (Belk) -- so the risk here is substantial.

The new equity probably won't be worth much

One reason to steer clear of CBL, aside from the impending bankruptcy filing, is that while common and preferred shareholders will get 10% of the reorganized company's stock, CBL hasn't determined how that would be split between the various classes of stock. In theory, the preferred shares are senior to common shares and should thus receive the bulk of the new equity.

Yet even if common shareholders get 5% of the company's new stock, that would still make CBL shares a bad deal. Based on the stock's recent trading price near $0.20, CBL has a diluted market cap of approximately $40 million. The new company would have to be worth $800 million to justify that valuation. That would work out to nearly 10 times its projected 2021 cash flow after accounting for the new $500 million of secured debt and required debt amortization payments.

Why Mall REITs Like Simon and Macerich Plunged at Today's Open