Turn off the news to find out what will drive returns.

Back in mid-March, I remember sharing projections about coronavirus cases and potential deaths with family and friends. The most common response was "No way will it get too bad. They'll figure something out." As of today, more than 29 million cases of the virus have been reported worldwide, with more than 900,000 deaths . The good news? More than 50 vaccine candidates are in development, and public-private partnerships are allowing researchers to compress a decade's worth of work into a year.

In the race to bring a vaccine to market, AstraZeneca (AZN 2.86%) is near the front of the pack. The company has partnered with the University of Oxford to develop a viral vector -- or "Trojan Horse" -- vaccine. This approach introduces a weakened version of the virus into the body, triggering the immune system and creating a defense against future SARS-CoV-2 exposure. Efforts such as these should give us great hope that humanity will beat the virus -- but should investors in AstraZeneca have the same hope for outsized returns? 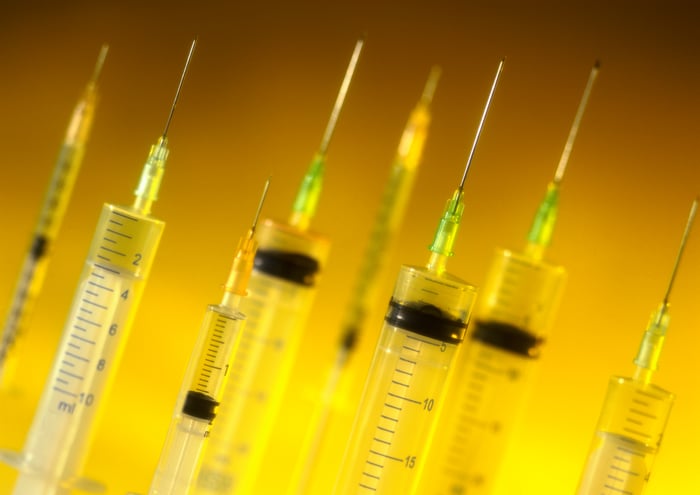 That's why they call it "money"

Ultimately, investors buy shares in a company as a way to stake a claim on future profits. While they're planning to produce a billion doses of the vaccine, AstraZeneca and Oxford have agreed to provide it at cost, meaning without a profit. This is wonderful for humanity, but not so much for investors. Despite the attention this vaccine candidate has gotten in the media, its critical phase 3 trials have only just begun in the U.S.; candidates from Moderna (MRNA 1.59%) and Pfizer (PFE 1.29%) have more than a month's head start.

Typically, it is the pipeline of products that drives a drug company's profits. Given that the average drug takes 10 years to develop and commercialize, it's worth looking past the day-to-day news and taking the long view when evaluating AstraZeneca's performance and potential.

Correlation is not causation

Despite declining revenue and profit over the past decade, AstraZeneca's stock price has been steadily marching upward. Profit margin has also declined, and the company's debt has almost doubled to more than $16 billion from $9 billion in 2010 .

Investors value companies based on future profits, and a pharmaceutical company's future profits depend heavily on the drugs in its pipeline. That means today's investors could be watching the page turn on a forgettable decade for AstraZeneca.

A plethora of profits

AstraZeneca's pipeline is indeed looking brighter. In a complete about-face, five of the company's top seven drugs had improving sales as of 2019; the same number were showing declining sales in 2012. This transformation is in large part a result of management's skewing the portfolio toward cancer and respiratory treatments.

A January 2019 analysis by Pharmaprojects listed AstraZeneca as having the fourth-largest drug pipeline of any global pharma company, behind Novartis AG (NVS 2.52%), Takeda Pharmaceutical Company (TAK 1.59%), and Johnson & Johnson (NYSE: JNJ). And the results are starting to show up in the company's financials. Year-over-year revenue was up 14% in the first half of 2020, with drugs categorized as "new medicines" leading the way with a rise of 45%. The oncology segment was up 24%. All of this translated into a 26% increase in earnings per share.

AstraZeneca's fate won't be tied to its vaccine

Pascal Soriot, who took the helm of CEO in 2012, admitted in 2018, "We have been in sales decline longer than I have been at AstraZeneca." Despite this, the stock has been decoupling from the fundamentals of the business for nearly a decade now, as investors continue to bet on the vision of a robust, oncology-focused pipeline.

The strategy appears to be on track, but a coronavirus vaccine will have little to do with the company's fortunes moving forward. Healthcare investors hoping to profit from one of the dozens of candidates attempting to help end the pandemic should look for companies whose futures are more closely tied to their own vaccine candidates, such as Moderna or Novavax (NVAX -2.02%), which recently signed an agreement to provide 76 million doses to the Canadian government.

Is This Monster Stock on the Verge of a Home Run?
349%