Comparing a top retailer with a maker of personal care products.

However, both are large-cap stocks supported by mature companies that deliver rising profits and steady dividend increases. Let's review both companies to see which investment offers more profit potential.

Costco leads the warehouse retailing business, outselling its most direct competitors, Walmart's Sam's Club and BJ's Wholesale. It also holds its own against other major brick-and-mortar retailers such as Walmart and Target. Moreover, it competes successfully with Amazon, primarily by turning a combined physical store and online presence to its advantage.

Still, Costco's success comes down to member growth and retention. Memberships, which currently start at $60 per year, make up the overwhelming majority of the company's profits. This model has allowed the company to grow to 552 warehouses across 45 U.S. states and Puerto Rico. It also operates an additional 244 warehouses in 11 other countries on four different continents. 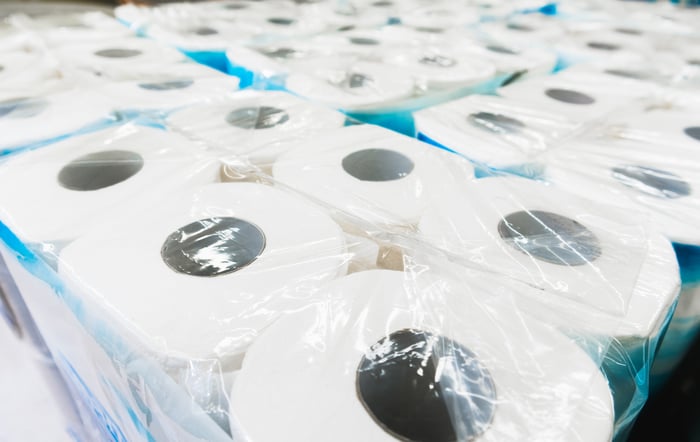 Due to its success, Costco is a relatively expensive stock. Its forward price-to-earnings (P/E) ratio has risen to about 39. In Costco's most recent quarter, earnings increased by nearly 27% from year-ago levels as the pandemic stoked sales of consumer staples. However, earnings for fiscal 2020 as a whole rose by just over 9% from 2019 levels. This is more in line with forecasts, which point to an expected 10% net income increase in each of the next two years.

Costco also offers a dividend, which it has increased every year since 2004. However, with the $2.80 per year payout yielding only about 0.73%, most buy this stock in hopes of gains.

Procter & Gamble remains a leading company in personal care products. For much of its 180-year history, brands such as Tide laundry detergent, Bounty paper towels, and Gillette razors produced tidy profits for the personal care giant.

For most of that time, Kimberly-Clark and Colgate-Palmolive served as its most direct competitors. However, as e-commerce took off, upstart, internet-based operations could compete more effectively. Consequently, P&G could no longer depend on name recognition and control of shelf space to drive sales.

Under current CEO David S. Taylor, it has resembled a start-up in some respects, buying products like Native deodorant that have sold well online. Thus, despite selling mostly commoditized products, it continues to drive growth.

Its forward P/E ratio now stands at around 27. P&G predicted between 3% and 7% core earnings-per-share growth for the upcoming fiscal year. This is in line with analyst forecasts, which predict increases of just under 6% in fiscal 2021 and about 7% for fiscal 2022. Nonetheless, despite steady growth, the stock appears pricey.

Where P&G stands out is with its dividend. At a yield of about 2.2%, the dividend of just over $3.16 per year is not noteworthy. Nonetheless, thanks to the company's 64-year track record of dividend increases, it is a draw for income-oriented stockholders.

From a valuation perspective, both Costco and Procter & Gamble have elevated earnings multiples relative to their expected profit growth. However, if I had to choose one, I would give the edge to Costco. For one, even amid high demand for personal care products during the pandemic, Costco stock has outperformed Procter & Gamble shares in 2020. 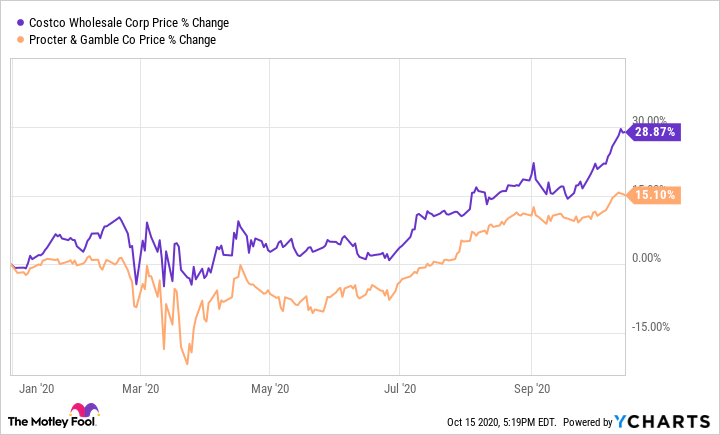 Additionally, Procter & Gamble already operates in more than 180 countries. While that is an impressive feat that few companies have accomplished, it leaves P&G with few new markets to tap.

Conversely, Costco operates in only a few countries. Nonetheless, it has shown that it can succeed abroad despite cultural differences. This bodes well for its international expansion for many years to come.

Both companies appear positioned to continue their growth and hike their dividends annually. However, with faster profit growth and more room for expansion, Costco stock seems to offer a more lucrative value proposition despite its higher multiple.