Please ensure Javascript is enabled for purposes of website accessibility
Log In Help Join The Motley Fool
Free Article Join Over 1 Million Premium Members And Get More In-Depth Stock Guidance and Research
By Parkev Tatevosian - Feb 4, 2021 at 7:55AM

The recent surge in AMC's stock price might be a shot in the arm.

AMC Entertainment Holdings (AMC -0.85%) is facing devastating impacts from the coronavirus pandemic. A vast majority of its theaters were asked to close down for several months and are only slowly coming back online at reduced capacity. The effect is that the company is burning through cash at an alarming rate and may not have enough to avoid filing for bankruptcy protection.

AMC is pulling out all the stops, doing everything in its power to reduce expenses and increase liquidity. Moreover, its shares are being swept up in the Reddit-induced buying frenzy that has increased its stock price by over 500% in January. The frenzy started with GameStop and has since evolved to include other stocks like BlackBerry and Bed Bath & Beyond. That development may allow AMC to raise additional equity capital, which could be a bridge that allows it to survive until it's operating at full capacity. Let's take a look at how close AMC is to bankruptcy. 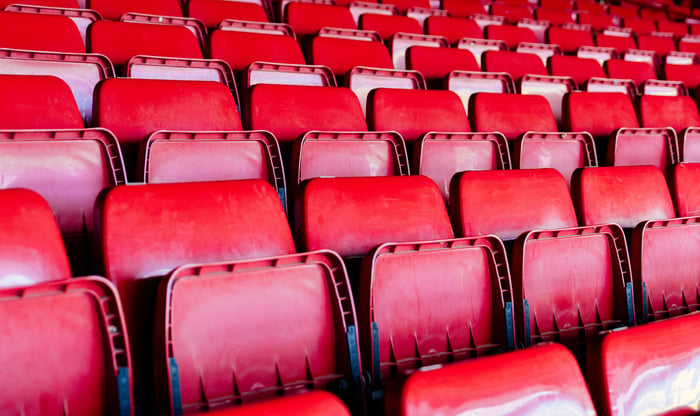 AMC theatres are empty more often than not as a result of the pandemic. Image source: Getty Images.

How long can it last?

In its third-quarter earnings report, AMC revealed that it had burned through roughly $388 million. That comes to a little less than $130 million per month, an enormous sum for a company that reported having $417 million of cash on hand as of Sept. 30, 2020. If it maintains the current level of cash burn without taking any actions to raise liquidity, it could be out of cash within the next few quarters.

However, AMC did take action. It was able to raise more than $1 billion in capital through several moves since it last reported. This is what CEO Adam Aron had to say about the recent actions: "After securing more than $1 billion of cash between April and November of 2020, through equity and debt raises along with a modest amount of asset sales, we are proud to announce today that over the past six weeks AMC has raised an additional $917 million capital infusion to bolster and solidify our liquidity and financial position. This means that any talk of an imminent bankruptcy for AMC is completely off the table."

The key word in that statement is imminent. While recent actions may be enough to avoid imminent bankruptcy, they may not be enough to stave it off beyond the next few quarters. At its current rate of cash burn, it has bought itself roughly seven months. If AMC's movie theaters aren't seeing enough footfalls by then, it could be in dire straits, and this time with potentially fewer lifelines. The company already has over $5.8 billion of debt on its balance sheet and it has maxed out its lines of credit.

That being said, several coronavirus vaccines have been approved and over 32 million people in the U.S. have received at least one dose. If enough of the population gets vaccinated to allow a return to normalcy, it may unleash an avalanche of pent-up demand for movie theater visits from a public liberated from confinement to their homes.

Although it may be enticing to join in and follow along with these popular trade ideas of recent days, it's important that investors take into consideration the company's bleak liquidity prospects. Moreover, it would be hard to justify AMC's current valuation even under the most optimistic scenarios. Investors still wanting to buy AMC stock for other reasons should proceed with caution and with the understanding that it's in a race against time.

If AMC does file for bankruptcy protection at some point, it does not necessarily mean it will no longer be in business. It does mean that it will renegotiate terms with creditors in a way that equity investors could be hurt substantially.