Please ensure Javascript is enabled for purposes of website accessibility
Log In Help Join The Motley Fool
Free Article Join Over 1 Million Premium Members And Get More In-Depth Stock Guidance and Research
By Parkev Tatevosian - Apr 30, 2021 at 7:44AM

Pinterest (PINS -2.47%) reported first-quarter results on Tuesday, April 27 to a disappointed audience. Investors sent shares tumbling after the earnings were announced. The disappointment arose partly because Pinterest reported flat user growth in the U.S. and said that the metric would remain flat next quarter as well. 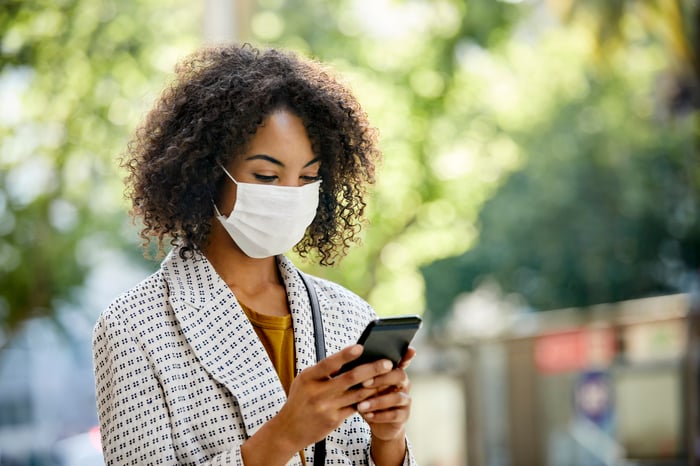 In the first quarter, revenue increased by 78% from the same point last year. That was enough for overall revenue to reach $485 million. The company reports revenue in the U.S. and international segments. While revenue from the U.S increased by a healthy 65%, revenue from the international segment grew by 170%. As a result, the latter makes up 20% of overall revenue, up from just 13% last year.

There is still a long runway for Pinterest to increase international revenue. The market remains relatively under-monetized compared to the U.S. segment. In addition, Pinterest just launched advertising in its first Latin American country (Brazil) in the first quarter. It plans to add the next Latin American country (Mexico) in the current quarter. As it builds out capabilities internationally, it could fuel sales growth in the segment for several years.

As far as types of businesses go, advertising accelerated from small-to-mid-sized businesses (SMBs) in the quarter. That is to be expected as those were the businesses most affected by pandemic-related shutdowns and capacity restrictions. Now, as millions of people are getting vaccinated daily against the coronavirus, and governments are easing restrictions on businesses, SMBs are likely to ramp up marketing spending to make their customers aware of their products and services.

The reopening trend can partly explain why Pinterest is guiding investors to expect revenue growth of 105% in the second quarter.

New user growth slows down in the U.S.

Of course, advertising revenue would shrink if the social media company didn't have people to show ads to. To that end, MAU growth is vital to Pinterest's overall business. At the onset of the pandemic, folks signed on to Pinterest by the millions. In the last three quarters of 2020, Pinterest added 92 million MAUs. To put that into context, it was off of a starting base of 367 million.

In the first-quarter shareholder letter, management had this to say about monthly active user numbers:

We believe that lockdowns probably pulled forward some user growth during 2020, particularly in the US where our service has been available longer. Starting in mid-March, the easing of pandemic restrictions slowed US MAU growth and lowered engagement year over year as people spent less time online.

It should not be surprising that user growth might slow down once people have more options outside their homes to entertain themselves. Streaming content provider Netflix (NFLX -0.98%) experienced a similar slowdown in membership growth in its most recent quarter. It cited the rapid growth in sign-ups during 2020 as the main cause.

Still, Pinterest added 19 million MAUs in the quarter, all of them from the international segment, to reach a total of 478 million, which is 30% more than the same point last year. The zero user growth from the U.S. is what disappointed investors. Furthermore, Pinterest is guiding investors for MAU growth in the mid-teens in the second quarter and another quarter of zero growth from the U.S.

With revenue and users continuing to grow, the recent pullback in share price can be a buying opportunity for long-term investors. Of course, risks remain with investing in such high-growth stocks, but the potential benefits could make the risk worthwhile for those who have the time horizon to wait out short-term volatility.