Please ensure Javascript is enabled for purposes of website accessibility
Log In Help Join The Motley Fool
Free Article Join Over 1 Million Premium Members And Get More In-Depth Stock Guidance and Research
By Anders Bylund - May 5, 2021 at 2:28PM

Investors are getting excited about this high-powered growth company again.

Shares of Cloudflare (NET 9.74%) rose 20.6% in April, according to data from S&P Global Market Intelligence. The provider of website security and performance tools mainly rode the market's resurgent interest in growth stocks, but it also posted a big jump after it revealed a promising partnership with semiconductor giant NVIDIA (NVDA 5.92%).

Cloudflare's stock jumped as much as 14.5% on April 13, boosted by news of the NVIDIA deal. The two companies are giving app developers and corporate customers easy access to NVIDIA's high-powered artificial intelligence (AI) processors in Cloudflare's edge-computing centers around the world. 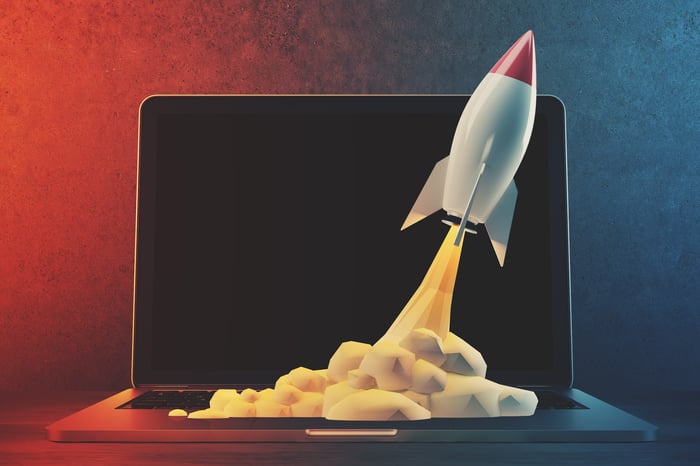 This partnership is potentially game-changing. Integrating NVIDIA's cutting-edge AI processors into Cloudflare's edge computing systems could give the company an edge over content-delivery rivals such as Fastly (FSLY 4.13%) and Akamai Technologies (AKAM 0.96%), assuming that its clients can find real-world use cases for the new tools.

That being said, Cloudflare's shares trade at a nosebleed-inducing 58 times sales and 30 times the company's book value. The stock has more than tripled in value over the last 52 weeks, leaving many investors wondering how much higher this rocket can go. At the same time, that's somewhat par for the course when you're looking at a high-growth company whose revenues more than tripled in the last three years.

2 Reasons to Buy Cloudflare Stock, and 1 Reason to Sell