Please ensure Javascript is enabled for purposes of website accessibility
Log In Help Join The Motley Fool
Free Article Join Over 1 Million Premium Members And Get More In-Depth Stock Guidance and Research
By Jason Hawthorne - Jun 6, 2021 at 6:47AM

He's called one the best business in the world. The other might be a close second.

Warren Buffett loves shareholder-friendly companies with great business models. He has made that clear over the years. His portfolio is full of companies whose customers are happy to hand over their money and that sport healthy dividends or share buyback programs.

Two of the best are Apple (AAPL 2.14%) and Mastercard (MA 1.05%). They may not be exciting investments in the short run, but time has proved to compound their advantages. Each company also has attributes that make it even stronger than it appears. If you're planning on buying and holding, it's hard to find companies that give you better odds of success. 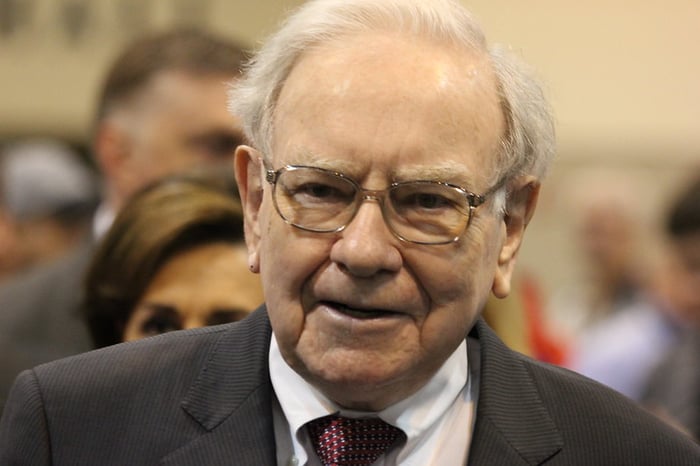 At this point, everyone is familiar with Apple because of its iPhone. New models and first-weekend sales numbers used to be an obsession on Wall Street. Nowadays, the tech giant's prospects don't rise and fall with each release. It's still important. The ubiquitous device is the company's best-selling product and even posted 66% year-over-year growth in the latest quarter thanks to the new iPhone 12 family. However, the business model is shifting.

The company has long been known for its elegantly designed hardware and intuitive interfaces, but the $2.1 trillion company is increasingly leaning on its high-margin services. They are especially meaningful to shareholders because of the profitability. In the most recently reported quarter, the services boasted a gross margin of 70%, compared to 36% for the products segment. As a standalone business, Apple's services brings in about the same profit as Berkshire Hathaway and would rank No. 53 on the Fortune 100 list, just ahead of Boeing.

Apple's services are also a key part of its ecosystem. It's the integration of all of the hardware, software, and services that makes it so difficult for customers to imagine buying anything else. That means the company is rarely replacing customers, making it easier to grow. And for a company of its size, growth has been astounding.

Another attribute Buffett loves is how shareholder-friendly management is. Tim Cook and team have been constantly shrinking the share count and increasing the dividend for years. Since 2013, the company has retired 34% of the shares outstanding and increased the dividend 115%. It all adds up to huge returns for shareholders. A $1,000 investment in Apple at the beginning of 2016 would be worth $5,365 today.

As the pandemic was beginning last February, Buffett said Apple was probably the best business in the world. He might be right, and it's getting stronger.

Most are familiar with the Mastercard logo on their credit or debit card. Many may not realize what it represents. The company itself doesn't issue cards or lend money. It operates a global payment network. It simply provides the infrastructure for banks to interact with one another and complete a transaction. To do this, the network has to connect the cardholder, card issuer, merchant, and merchant's bank.

It's a great business. In 2020, $6.3 trillion in transactions were processed on its network. The company has benefited from a global trend away from cash for decades. In fact, that gross dollar volume (GDV) on the network in 2020 has grown from $2 trillion when the company went public in 2006. Last year's GDV was roughly flat compared to 2019, but things are picking back up. In the first quarter of 2021, it was up 8% year over year.

Having the payment infrastructure in place is a little like owning a railroad. Instead of moving people, it's currency. Unlike railroads, Mastercard's payment network doesn't require a lot of money to operate or maintain. That makes it one of the most profitable businesses around. For comparison, its profit margin is on par with Adobe and almost twice that of Apple.

That profitability has let it return a lot of money to shareholders through buybacks and dividends. The returns barely missed a beat during the pandemic, with only a temporary pause in share repurchases last spring.

The steady march toward a cashless society, and Mastercard's global payment network, make it an unusually stable business. For anyone looking to gain exposure to the stock market with limited risk, Mastercard is a perfect choice.

Its strong competitive position and impressive capital return program keep delivering for shareholders while letting them sleep well at night. That has made every month a good one to add shares of Mastercard. As an investor with a long-term mindset, that may be what Buffett is most attracted to.