Please ensure Javascript is enabled for purposes of website accessibility
Log In Help Join The Motley Fool
Free Article Join Over 1 Million Premium Members And Get More In-Depth Stock Guidance and Research
By Parkev Tatevosian - Jun 6, 2021 at 7:42AM

The international retailer reported net sales growth of 21.7% in the third quarter.

Costco (COST 0.94%) reported third-quarter earnings on May 27. The membership-only big-box retailer of all things from groceries to electronics to patio furniture revealed in the report that customer demand continues to surge.

The consumer, fueled by $300 billion in stimulus checks that hit bank accounts in March and April, is not afraid to spend. That's music to Costco's ears, as the elevated levels of spending expand for at least one more quarter.

Costco said that net sales increased by 21.7% year over year in the third quarter. To put that figure into context, Costco's compound annual growth rate for sales over the last decade is 7.9%. Put another way, in the most recent quarter, the retailer grew sales at nearly three times the usual rate. 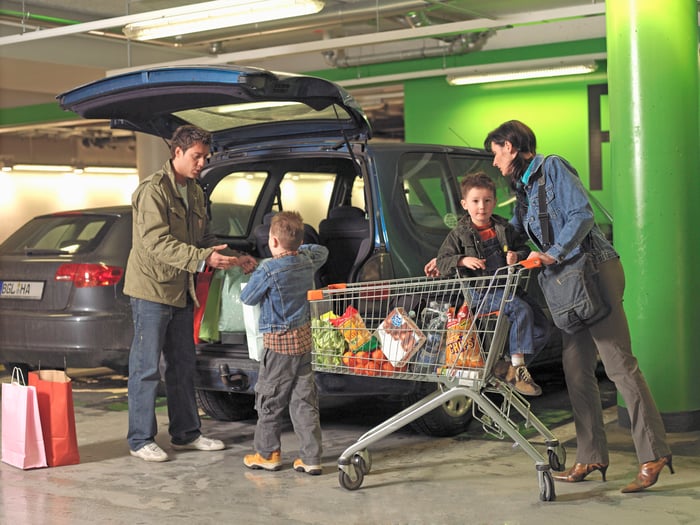 Interestingly, the increase is being driven by shoppers' visiting frequency, which was up by 12.5% year over year, more so than by an increase in spending per trip, up by 7.3% year over year. That's a telling stat. Understandably, folks attempted to make fewer trips to stores at the onset of the pandemic and subsequently spent more on each trip. This figure from Cosco reveals that consumers are leaving their homes more often, as nearly 2 billion doses of vaccines against the coronavirus have been administered worldwide.

The continued increase in sales and a reduction in COVID-19-related expenses are leading profits to expand. Costco reported net earnings of $1.2 billion in the quarter, up from $838 million in the same quarter last year. Costco discontinued its $2 per hour boosted employee pay a couple of weeks into the third quarter and replaced it with a permanent $1 per hour wage increase. That saved the company an estimated $1 per hour on employee costs versus the same quarter last year.

At the end of the third quarter, Costco had 60.6 million paying households, up by nearly 1 million from the previous quarters' total of 59.7 million. Recall that Costco's business is a membership model that requires households to pay an annual membership fee to shop at its warehouses. What's more, the membership renewal rate in the U.S. and Canada, where the company has the majority of its stores, was 91% in the most recent quarter. Thus, once customers sign up for Costco, they tend to stick around.

That could mean that Costco can maintain the vast majority of new customers it gained during the pandemic for the longer run.

In addition, Costco stock is trading at a trailing-12-month price-to-earnings ratio of 38.68, which is near the highest it traded for in the last decade. That could indicate that much of the positive outlook is already priced into the stock. Still, there is no doubt that Costco is an excellent business that any investor would be fortunate to own over the long term.

Investors wishing to take the more cautious approach may want to wait for a pullback in share price to start a position in Costco stock.