Please ensure Javascript is enabled for purposes of website accessibility
Log In Help Join The Motley Fool
Free Article Join Over 1 Million Premium Members And Get More In-Depth Stock Guidance and Research
By Rachel Warren - Jun 23, 2021 at 7:10AM

Two unstoppable e-commerce stocks and one high-growth healthcare stock made the cut.

"If you aren't willing to own a stock for 10 years, don't even think about owning it for 10 minutes." These words from one of my favorite investors of all time, Warren Buffett, reflect a sentiment that should always underpin your core thesis as a long-term investor.

When considering a stock for your portfolio -- in addition to examining factors such as its financial situation, long-term growth potential, business fundamentals, and competitive advantage -- you should also think about whether you're really confident holding onto the company for years at a time. Not only can this help you narrow down the best stocks for your personal portfolio goals, but it's often easier to separate the high-caliber buys from lower-caliber ones.

When you buy and hold a stock for years rather than days, weeks, or months, you're not only more likely to see maximal portfolio gains over time but you're also more likely to overcome ups and downs in the market with less of an overall impact on your portfolio because you aren't trading stocks based on short-term patterns. On that note, here are three top growth stocks that are no-brainer picks for the avid long-term investor and should be at the top of your buy list this month. 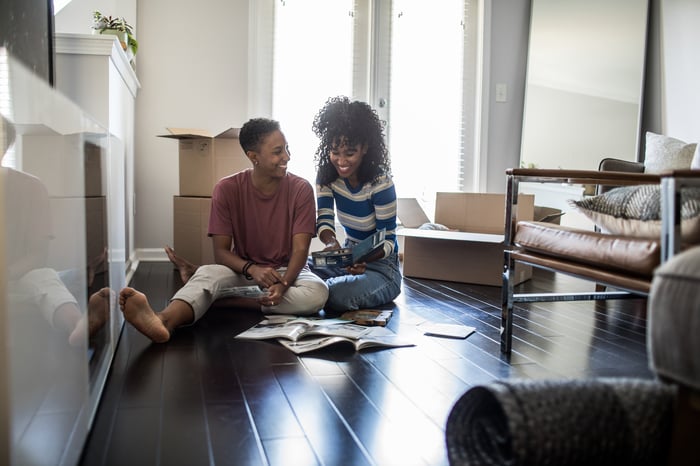 Amazon (AMZN -1.85%) is one of my favorite growth stocks of all time for long-term investors. Shares of the company are up by more than 730% from where it was trading just one year ago, and analysts think the company has plenty of upside potential left to pursue. They give Amazon a high price target of $5,500 per share, which represents a potential upside of about 60% from the company's current share price.

Amazon's diverse business strategy has brought it monumental success in any industry it chooses to expand into. You name it -- from online retail to cloud computing to healthcare to the grocery industry -- Amazon's ability to attract new streams of revenue and seize market share in already crowded marketplaces has made it a force to be reckoned with and a clear industry disruptor.

Case in point: the company launched its cloud business Amazon Web Services (AWS) in 2006. Today, AWS commands the dominant share of the $130 billion cloud industry with a 32% piece of the market, according to Statista. E-commerce is another sphere in which Amazon is a clear industry leader. In 2020, Amazon's e-commerce sales accounted for roughly 40% of all e-commerce sales in the U.S., according to eMarketer.

And a Jan. 2021 study by S&P Global reported that the online Amazon Pharmacy -- which the company just launched last November -- is likely to snag up notable market share from established brick-and-mortar rivals CVS and Walgreens in the coming years.

The company reported 38% net sales growth in 2020 and its net income soared by nearly 84%. And in the first quarter of this year, Amazon's net sales increased 44% year over year, while its bottom line jumped more than 220%.

If you're searching for a stock that can help your portfolio navigate whatever murky market waters may lie ahead, Amazon's diverse lineup of successful businesses make it an incredible recession-resilient play to add to your basket.

Etsy (ETSY -3.27%) is another robust growth stock leading the way in the world of e-commerce. The company rose to the forefront of many investors' radars during the pandemic on the heels of the e-commerce and stay-at-home stock boom.

But Etsy was already a high-growth stock with a strong financial track record before the pandemic propelled additional hikes to its balance sheet and share price. The company's revenue grew by a robust 37% in 2018, and Etsy reported a 36% surge in revenue in 2019.

2020 was a record year for Etsy, in which it generated robust growth across all key reporting metrics. Its revenue and net income shot up by respective rates of 111% and 264%, while adjusted EBITDA (earnings before interest, taxes, depreciation, and amortization) spiked by an eye-popping 195%.

In addition, Etsy's gross merchandise sales (GMS) in 2020 were 107% higher than the prior year. The spike in online shopping during the pandemic also brought a wave of new buyers and sellers to Etsy's platform in 2020. In fact, Etsy finished out the year with 62% more active sellers and 77% more active buyers on its platform than it reported at the end of 2019.

If investors were worried that Etsy couldn't keep up this kind of growth as the world transitions to the post-pandemic normal, the company's first-quarter performance should have helped to quash those concerns. Both Etsy's revenue and net income shot up exponentially from the year-ago period -- 142% and 1,048%, respectively -- while its GMS surged 132% year over year. The company's active seller count was up 67% and it also recorded 90% more active buyers on its platform than in the year-ago quarter.

Etsy's platform presents a unique take on the traditional e-commerce business model because it markets itself as place where people can buy specialty goods and one-of-a-kind items that are difficult or impossible to find elsewhere. This gives the company virtually limitless market opportunity within the e-commerce sphere and a robust competitive advantage. Etsy also recently announced that it would be purchasing resale marketplace Depop, a move that will further expand the company's leadership in the online retail space and its reach in the global e-commerce market.

Shares of Etsy are trading nearly 80% higher than one year ago. As Etsy continues to diversify its business and build upon its exceptional track record of balance sheet growth, the stock is likely to shoot up even higher. In the meantime, investors who want to maximize their portfolio's long-term growth potential without introducing too much volatility into the mix should take a second look at this high-quality stock.

The healthcare sphere continues to abound with opportunity for long-term investors. While perhaps lesser-known in the world of healthcare stocks, rare-disease drugmaker Vertex Pharmaceuticals (VRTX -1.24%) is a premium growth play to put on your radar.

The company currently has four approved medicines on the market. All of them are for the treatment of cystic fibrosis (CF). On June 9, Vertex Pharmaceuticals announced that the Food and Drug Administration had expanded its approval for the company's top-selling drug Trikafta. Previously, Trikafta was approved for individuals aged 12 and up with certain CF mutations, which represented roughly 90% of all people who have the inherited disorder. Now, Trikafta's approval has been expanded to include children between the ages of six and 11 who have certain CF mutations.

This is great news for CF patients and will further cement Vertex's leadership in this sector of the healthcare market. The CF therapeutics market is a multi-billion dollar industry and is expected to hit a $14 billion valuation globally by the year 2025.

In the first quarter of 2021, the company's product revenues jumped by a respectable 14% year over year while it reported an 8% increase in net income. Trikafta remained the company's top-selling drug during the three-month period, raking in a total revenue of $1.2 billion. Vertex's other three approved products -- Symdeko/Symkevi, Orkambi, and Kalydeco -- brought in respective revenues of $125 million, $219 million, and $213 million. Vertex Pharmaceuticals also grew its cash position to just shy of $7 billion in the quarter.

Meanwhile, Vertex Pharmaceuticals is trading about 18% lower than at the beginning of the year, but that shouldn't put investors off from buying shares of the company. The company ticks all the boxes you want to find in a top-notch healthcare stock: above-average revenue growth, profitability, solid liquidity, a robust portfolio of products, and a clear competitive advantage. Now looks like a great time to snag this premium stock on sale and prime your portfolio for generous long-term returns.