Meme stock tailwinds could only lift the popular computer hardware retailer so far for so long.

Over the past few days, meme stock Newegg Commerce (NEGG 2.76%) has not been particularly kind to its shareholders, especially those who put all their eggs in that basket. Its share price Tuesday was down 65% from the multiyear intraday high it shot up to earlier in July.

There has been a lot of hype surrounding recent additions to Newegg's retail offerings -- graphics cards built around NVIDIA's GeForce RTX 30 Series GPU, which is coveted by gamers and cryptocurrency miners alike. But product hype can fade as quickly as it surges. Is there any way that Newegg stock can keep rising? 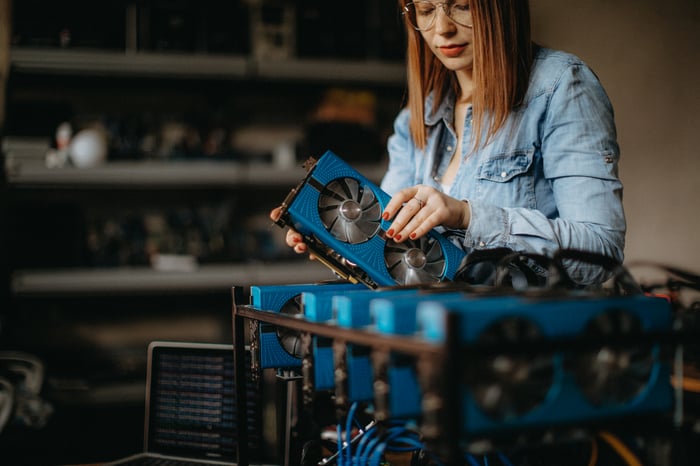 The RTX 30 series GPUs were in low supply when first released due to the semiconductor shortage caused by the coronavirus pandemic. However, Taiwan Semiconductor Manufacturing (NYSE: TSM), NVIDIA's chip foundry, announced that it expects the shortage to dissipate as early as this quarter. So that should cool things down a bit.

Newegg was making bank selling the RTX 30 series with its ridiculous markups. For example, units built on the GeForce RTX 3090 retail for around $3,000 on its website, despite its manufacturer-suggested retail price of just $1,499. Those prices are likely to fall in the near future.

What's more, demand for graphics cards is also falling. For years, China was a major cryptocurrency mining hub. The central government in Beijing strictly controls the outflow of capital from the country, which led many Chinese citizens to buy digital currencies so they could shift money abroad. At one point, Chinese miners accounted for about 70% of global Bitcoin mining. However, since May, the country has been cracking down on the energy-intensive practice, and various provinces have shut down crypto-mining operations within their borders. On July 14, the province of Anhui (the eighth-most populous in China) joined in, citing concerns about an electricity shortage. At least four provinces have now shut down mining operations with support from Beijing.

The retail traders of Reddit's WallStreetBets community were largely responsible for Newegg's July stock run-up as they bought shares hand over fist. Unfortunately, due to their limited capital base, the community could only boost the price to a certain point before the momentum started to fade and mass profit-taking occurred. In addition, fears of legal sanctions increasingly take hold. Many WallStreetBets members have posted public messages on Reddit or Discord to "solicit" new investors to buy specific meme stocks, making it relatively simple for regulatory agencies like the Securities and Exchange Commission to launch investigations into their practices.

So will there be another takeoff?

On July 14, Hangzhou Lianluo Interactive Information Technology Co., the controlling shareholder of Newegg, issued a statement that it anticipates that Newegg will report higher gross merchandise value, revenue, and net income for the first half of 2021 than it did for the same period last year. Unlike many meme stocks, Newegg has a solid business. It sells computer parts, PCs, components, gaming equipment, electronics, and other hardware to more than 4.7 million customers each year. Its market share in select electronic components is as high as 40.7%.

The company ships its goods to customers directly from warehouses from China, which is typically cheaper than sending the same goods across U.S. state lines.

Last year, its revenue increased by 38% to $2.1149 billion. Despite that, it operates with razor-thin gross margins just north of 10%.

Newegg is a great company at the end of the day, but its stock is still overvalued. Even after the sell-off that followed its surge this month, it's still trading at more than triple the price it was hovering around in April. Investors should wait until the company's market cap at least halves from its current level in the neighborhood of $10 billion before buying. Or, at a minimum, open a position gradually using dollar-cost averaging, under the expectation that the stock will deflate alongside the hype.

Zhiyuan Sun has no position in any of the stocks mentioned. The Motley Fool owns shares of and recommends Bitcoin, Nvidia, and Taiwan Semiconductor Manufacturing. The Motley Fool has a disclosure policy.

Why AMC, GameStop, and Newegg Were All Over the Place Today
357%