This unlikely meme stock gives bulls and bears a lot to chew on.

There's no shortage of controversial investment options in the market these days. Between cryptocurrencies, meme stocks, and valuations not seen since the dotcom bubble, everyone seems to have an opinion on why something is amiss in the financial markets.

To make an informed decision, it's important to understand what's behind the headlines. After all, it takes buyers and sellers to make a trade.

Digging into one of the more unlikely meme stocks -- Clover Health (CLOV 1.53%) -- shows why bulls and bears have conviction. Interestingly, they might not actually disagree on the facts. 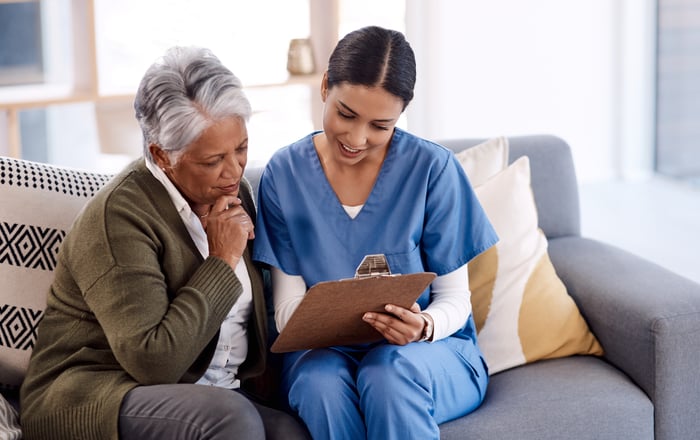 Clover was brought public through a special purpose acquisition company (SPAC) owned by Chamath Palihapitiya. A SPAC is a shell company created when investors raise money with the intent of finding and acquiring another company.

The structure has come under scrutiny, as its popularity has exploded in the past two years. While it provides start-ups with a less-burdensome path to going public, it can also circumvent some of the regulatory checks during a traditional initial public offering. Also, it can leave the investing sponsors with as much as 20% of the acquired company's equity. For retail investors, it can be a little like buying $0.80 for a dollar.

Investing is often about narrative -- a story that explains why your money will grow. Few have been able to spin a more compelling tale in recent years than former Facebook executive Chamath Palihapitiya. His brash style and well-timed interviews on CNBC have gained him a large following.

He's bashed his former company, compared venture capital to a Ponzi scheme, and waxed poetic about inequality and climate change. Once, when Bitcoin reached $150,000, he claimed he would buy the Hamptons -- the oceanside community of eight-figure homes where rich New Yorkers vacation -- and turn it into a summer camp for kids and low-cost housing.

He also told a class at Stanford's business school that he wanted the money, and he would play the game to get it. Except he said it in much more colorful language. It's not hard to understand why controversy follows him around. In fact, he seems to cultivate it.

2. Allegations it withheld information from investors

When Chamath brought Clover Health public in January, the company was the subject of an investigation that investors weren't aware of. Management said it did not consider the investigation "material". It did officially disclose it one day after a short seller came forward outlining the allegations. Those claims ranged from illegal kickbacks to conflicts of interest with subsidiaries.

In just one of 12 items being investigated, a company called SeekMedicare was established to help seniors choose a Medicare Advantage insurer. Although it promoted itself as working for seniors rather than insurance companies, it was in fact owned by Clover. Shortly after this came to light, the company's website was changed in what may be a tacit admission of the conflict of interest. The tag line was changed from "We don't work for insurance companies. We work for you" to "We do the work. So you get the best coverage." It turns out, CEO Vivek Garipalli is no stranger to being under the regulatory microscope.

3. An investigation into hospitals the CEO used to run

Prior to co-founding Clover, Garipalli co-founded Carepoint Health. It was formed by purchasing three non-profit New Jersey hospitals. Garipalli and his partners took several steps to save the hospitals from bankruptcy, including converting them to for-profit entities. Next, they severed contracts with the largest insurers making the facilities out-of-network for all patients. The move left emergency room patients still paying in-network costs out-of-pocket, while allowing the hospitals to charge insurers as much as they wanted.

A 2013 New York Times investigation found that the hospitals were the most expensive in the nation for many of the most common procedures. In fact, prices were six to 12 times higher than surrounding hospitals. The organization also set up a series of shell companies that extracted $157 million in management fees from the health system in just three years. Although a state investigation found no wrongdoing, transparency laws were tightened to discourage the practice. For what it's worth, community leaders say the group was open about the tactics they planned to use to keep the hospitals open. As of early 2021, the system was dissolving and attempting to sell the hospitals.

It's all about perspective

Chamath might be brash, but his billionaire status doesn't get in the way of his anti-establishment message. And just because his SPAC brought Clover Health public doesn't mean that message or his personality have a bearing on the company and its prospects. In fact, the association is likely one of the main reasons many retail investors continue buying shares. It's a way to poke a finger in the eye of Wall Street.

Like Chamath, the company and its CEO are no stranger to controversy. Aggressive billing practices and related-party transactions may have lined the pockets of Garipalli and his co-founders, but three community hospitals that were headed toward bankruptcy were able to remain open. How an investor feels about these facts will likely determine whether they think Clover Health will make a good investment. That ermains to be seen. What is less certain is why the company is controversial.

Randi Zuckerberg, a former director of market development and spokeswoman for Facebook and sister to its CEO, Mark Zuckerberg, is a member of The Motley Fool's board of directors. Jason Hawthorne has no position in any of the stocks mentioned. The Motley Fool owns shares of and recommends Facebook. The Motley Fool has a disclosure policy.