Please ensure Javascript is enabled for purposes of website accessibility
Log In Help Join The Motley Fool
Free Article Join Over 1 Million Premium Members And Get More In-Depth Stock Guidance and Research
By Keith Speights – Aug 23, 2021 at 5:51AM

One could jump more than 40% if analysts are right.

Astronomical. Frothy. Nosebleed level. Take your pick of the best way to describe the valuation of the stock market right now. The raging bull market from the last decade combined with the huge rebound from the coronavirus-fueled market meltdown last year has pushed stock valuations to sky-high levels.

That doesn't mean there aren't stocks that could still go much higher, though. Here are three growth stocks to buy that Wall Street thinks could soar 30% or more. 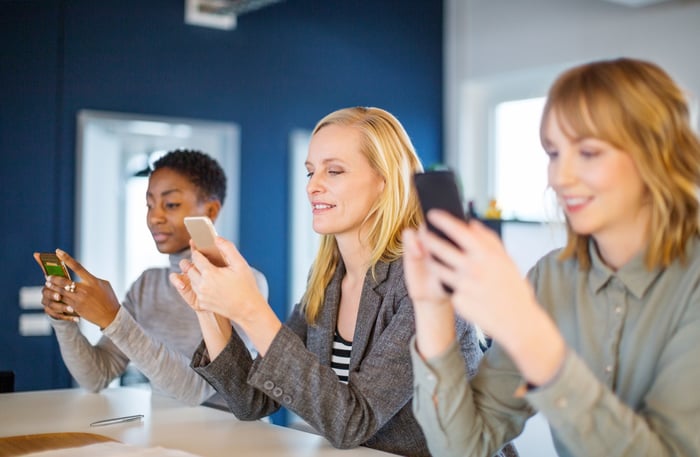 Pinterest's (PINS -2.52%) shares are down nearly 40% from the peak earlier this year. Wall Street analysts think that the stock can regain most of this decline. The consensus price target for Pinterest reflects a 37% premium above its current share price.

Investors especially soured on Pinterest after the company reported a drop in monthly active users (MAUs) in its second-quarter update. That's concerning because advertisers pay based on how many potential consumers they're reaching.

However, I think Wall Street's optimism about Pinterest is justified. Pinterest CEO Ben Silbermann noted in the company's Q2 conference call, "In Q2, monthly active users on our mobile apps grew in the U.S. year over year and internationally by more than 20%." The decline came from web users. That makes sense with the reopening of the economy.

Over the long term, Pinterest should have excellent growth prospects. The company is engaging users more with new features including interactive video. It's focused on increasing monetization with Pinterest Shopping ads. Pinterest is also expanding its international reach.

Teladoc Health (TDOC -4.02%) has taken an even worse beating than Pinterest. The healthcare stock has plunged more than 50% from its first-quarter highs. Analysts, though, believe that Teladoc is a bargain now with the average price target more than 40% above the current share price.

Like Pinterest, the main concern for Teladoc is that the user boom experienced in the pandemic last year will fade. The company has already seen its membership growth rate slow significantly.

But Teladoc continues to perform very well on several fronts. Its revenue per member per month soared 142% year over year in Q2 and jumped 10.3% quarter over quarter. The company's utilization rate is climbing. Teladoc's visit volume also is increasing.

I remain bullish about Teladoc's long-term potential. The company is only scratching the surface of the addressable virtual care market in the U.S. It has significant opportunities to expand internationally. Virtual care is here to stay. Teladoc is in the market leader and is likely to hold onto its top spot.

Vertex Pharmaceuticals' (VRTX 0.74%) shares have fallen nearly 19% below the peak set in early 2021. The stock could recapture its highs and then some if Wall Street analysts are right. The consensus price target for the biotech stock reflects a 33% premium over the current share price.

The primary uncertainty for Vertex relates to its pipeline. Vertex has experienced a couple of setbacks for its alpha-1 antitrypsin deficiency program. It doesn't have any late-stage candidates.

However, the company's cystic fibrosis (CF) franchise still has plenty of room to grow. Vertex hopes to pick up additional reimbursement deals and win regulatory approvals for younger age groups for its newest CF blockbuster, Trikafta/Kafrio.

And Vertex's pipeline is stronger than some might think. CEO Reshma Kewalramani stated in the big biotech's Q2 conference call that Vertex and CRISPR Therapeutics hope to file for regulatory approvals of CTX001 in treating rare blood disorders beta-thalassemia and sickle cell disease as soon as 18 months from now. Vertex also has a couple of other promising programs in phase 2 testing that target non-CF indications.

I agree with Wall Street analysts that this biotech stock should be a solid winner over the next 12 months and beyond.