Not every stock on the popular trading app is worth owning.

Robinhood Markets is the company behind investing platform Robinhood. Particularly popular among younger generations, Robinhood has received a lot of praise because of its efforts to "democratize finance." Thanks to its app, many who had never invested in stocks before are now actively doing so. Considering the stock market remains one of the best wealth generators for the common person, that is not a bad thing.

With that said, Robinhood investors aren't perfect, and while the company's list of the 100 most popular stocks on the platform features some excellent picks, others aren't so great. Here are two popular Robinhood stocks I wouldn't buy with free money: Ocugen (OCGN 6.12%) and Inovio Pharmaceuticals (INO 5.70%).

Ocugen -- a clinical-stage biotech, meaning it currently has no commercialized products -- is playing catch-up in the coronavirus vaccine market. That's not necessarily a losing strategy, particularly for a company this size; its current market cap only stands at $1.45 billion. There remains some white space in the COVID-19 vaccine market, especially in developing countries and given the advent of newer variants of the disease. 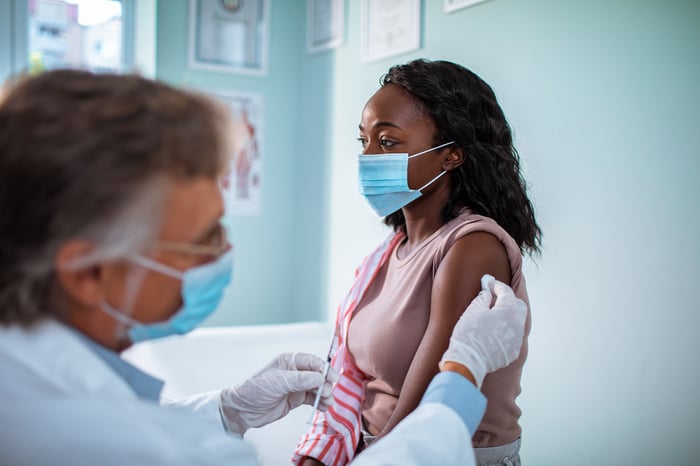 If Ocugen earns Emergency Use Authorization (EUA) from the U.S. Food and Drug Administration for its candidate and racks up even $1 billion in sales, it would be a major win for the company. However, there are some major issues to consider. First, the company inked a deal to co-develop and co-commercialize its candidate, Covaxin, with India-based Bharat Biotech. While Ocugen will hold commercial rights to the vaccine in the U.S. and Canada (pending approval), it will only keep 45% of the profits generated by Covaxin in these countries.

Second, the prospects for a speedy EUA in the U.S. are all but gone for Covaxin. Per the FDA's recommendation, Ocugen is now likely to file a Biologics License Application, which will take several months longer to be reviewed than an EUA. Third, Covaxin's ability to grind out market share in this competitive space is doubtful. In a phase 3 clinical trial conducted in India that enrolled 25,798 participants, the vaccine candidate proved 77.8% effective against COVID-19. Its efficacy against the rapidly spreading delta variant was 65.2%.

Meanwhile, the vaccines developed by Pfizer, Moderna, and Novavax have all shown overall efficacy of 90% or greater. Could Covaxin's overall efficacy be lower at least in part because its late-stage study was conducted in India, where the delta variant originated? Maybe, but other vaccines, including the one marketed by Johnson & Johnson, have also shown potency against this variant. Putting all of this together and adding the usual risks biotech companies face (including potential unforeseen clinical and regulatory setbacks), Ocugen seems far too risky to invest in at the moment.

Inovio Pharmaceuticals is also hoping to enter the COVID-19 market with its candidate, INO-4800. However, the biotech's prospects are even worse than those of Ocugen. Inovio faces at least two major challenges. First, the company is unable to run a phase 3 clinical trial in the U.S. because of concerns regulators raised regarding the proprietary device it uses to administer its vaccine, the Cellectra 2000.

Second, the U.S. government withdrew funding for the phase 3 portion of its phase 2/3 study for INO-4800. As a clinical-stage biotech, Inovio does not generate any product sales, and while it did receive grants last year to help with its coronavirus-related efforts, with several vaccines now widely available, the company will have a hard time attracting additional third-party grants.

So is INO-4800 destined to remain in Inovio's late-stage pipeline forever? Not necessarily. The company plans on running a phase 3 clinical trial in Asia and South America in collaboration with Advaccine Biopharmaceuticals Suzhou. The study, which is supposed to kick off before the end of the summer, will test the safety and efficacy of two doses of the vaccine candidate administered one month apart. In theory, Inovio could also manage to generate decent sales from INO-4800 given the advent of newer variants of the virus. But by the time the phase 3 study is complete, there is no telling how much of the coronavirus vaccine market will be left up for grabs.

Time isn't on Inovio's side, and betting that the company's master plan will come to fruition seems speculative. In short, it'd be best to stay away from this company -- at least for now.