Europe's fuel crisis could keep sending natural gas prices higher, but not all natural gas stocks may be worth a bet.

Natural gas stocks were crushing the markets today, with stocks across the board surging double-digits. Some of the notable gainers as of 2:45 p.m. included:

A perfect storm of soaring demand, tight supply, and surging natural gas prices is brewing in the global natural gas markets. However, some natural gas stocks may still not make as much money from higher gas prices, and that's something you must know before betting on energy stocks right now.

Natural gas prices were up an astounding 8% at the time of this writing, with U.S. gas futures hovering around $5.5 million per  British thermal units and hitting multiyear highs. I'm not surprised as this rally in natural gas prices has been in the works for several weeks now.

Domestic gas supplies have grown at a slower pace in recent weeks. The last weekly natural gas report, released on Sept. 23 by the U.S. Energy Information Administration's (EIA), revealed inventories in underground storage facilities rose by only 76 billion cubic feet, or barely 2.5%, during the week ended Sept. 17. Total inventories were down 16% year over year and 6.9% below the five-year average. 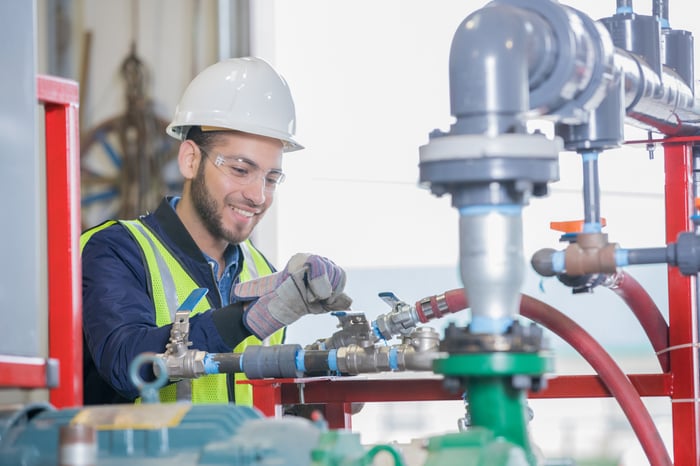 Hurricane Ida is largely to blame as it brought production in the Gulf of Mexico region to a grinding halt. On Sept. 23, the U.S. Bureau of Safety and Environmental Enforcement (BSEE) estimated that as much as 24.3% of the gas production in the region was still shut.

A severe energy crisis unfolding in Europe has hit the EU and is driving natural gas prices even higher. Multiple industries are curtailing production. Just this morning, chemical giant BASF announced it was cutting back production at a couple of ammonia plants, citing challenges because of the soaring price of natural gas liquids (NGL). Things have come to a point where the EIA has even called on Russia to supply more gas to Europe.

While manufacturers, utilities, and consumers could end up paying more for natural gas, natural gas producers are hoping to make hay while the sun shines, encouraging investors to bet on natural gas stocks as their cash flows boom. Investors' optimism isn't unwarranted: Most natural gas companies are using incremental cash flows from higher gas prices to strengthen their balance sheets and return more capital to shareholders.

Rising prices of NGL, for example, could hugely benefit Antero Resources. Antero revealed it was mostly unhedged through 2022 as management believes NGL prices were headed higher. By the end of July, Antero believed it could bring down its debt level to below $2 billion at what were then natural gas and NGL prices -- by the end of 2022. With prices rallying significantly higher since, Antero should be able to generate massive amounts of cash flows and hit its debt goal much earlier.

Likewise, Tellurian must be thanking its stars right now as higher liquefied natural gas (LNG) prices should bring it the money required to build its Driftwood LNG export terminal in Louisiana. Tellurian's growth depends a great deal on the project.

On the other hand, as of July 16, Range Resources had hedged more than 75% of its projected natural gas production for the second half of 2021. Thus, its enjoyment of the upside in prices is limited. EQT also has substantial hedges and is one more company unlikely to be among the biggest winners from the rally in natural gas.

With the winter season approaching, the rally in natural gas prices may not cool down anytime soon. Keep an eye out for EIA's next weekly report on Sept. 30 to see how fast natural gas inventories are growing. With most stocks coming out with their quarterly earnings reports next month, investors in natural gas stocks have a lot to remain excited about.