The market welcomed BlackBerry's (BB -3.43%) better-than-expected fiscal second-quarter results, as evidenced by the 10.88% surge in the stock price following the news. Yet, investing in the stock remains a bet on management's ability to transform the cybersecurity specialist over the long term. And that bet has become riskier, as the company is likely to be accumulating significant losses over the next several years before potentially succeeding in its initiatives. Let's dig in.

At first sight, the company's second-quarter results looked disastrous. Revenue decreased 32% year over year to $175 million, and net loss reached $142 million, compared to a net loss of $23 million in the year-ago quarter.

However, analysts expected a sharp year-over-year drop in revenue. Indeed, BlackBerry is holding back the monetization of a significant part of its patent portfolio while seeking a buyer for this asset. Consequently, revenue from BlackBerry's "licensing and other" segment, which includes patent monetization, shrunk to $15 million, compared to $108 million the year before. And in addition to one-time items, the lack of revenue from that high-margin business (gross margin of 94% last year) contributed to BlackBerry's increasing net loss. 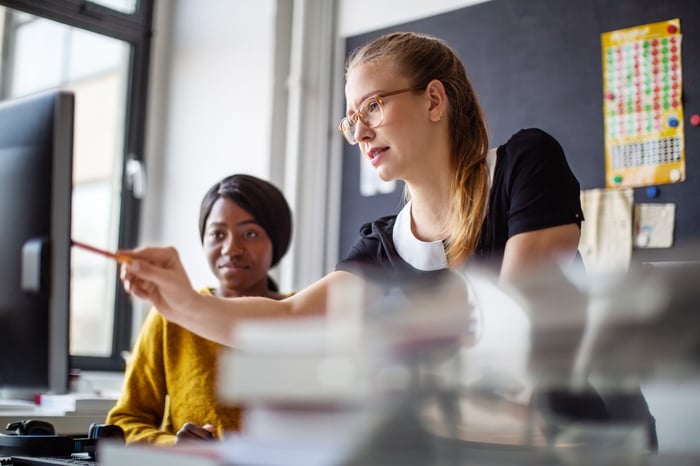 Looking at BlackBerry's two other segments, results exceeded management's modest expectations. Revenue from the IoT (Internet of Things) segment, which includes the company's embedded operating system QNX (which can be integrated into many types of devices), increased by 29% year over year to $40 million. That solid performance seems encouraging as QNX equips cars that automakers struggled to produce because of supply chain challenges. Interestingly, 24 of the world's top 25 electric vehicle automakers now choose QNX as part of their design.

More worrying, revenue from the company's cybersecurity segment stayed flat year over year at $120 million. That contrasts with the impressive revenue growth several cybersecurity specialists have recently reported, boosted by the need to increasingly protect remote workers. For instance, the endpoint protection specialists CrowdStrike and SentinelOne, which compete with BlackBerry's Cylance solution, grew their top lines by 70% and 121%, respectively, during the latest quarter.

So given these short-term results, and considering the patent transaction proceeds, which should happen during this quarter according to CEO John Chen, the company will be left with two main growth levers that depend on management's execution.

First, the key cybersecurity business (69% of revenue during the last quarter) must recover to reduce the performance gap with its peers. Then, BlackBerry's vehicle data exchange platform, IVY, must become a standard in the automotive industry over the long term.

Fortunately, the sale of a part of the company's patent portfolio should provide a comfortable and needed safety net to fund these growth initiatives. Indeed, at the end of the last quarter, cash, cash equivalents, and investments represented $745 million, compared to a higher debt load of $782 million.

But with a potentially reduced high-margin licensing business, reaching profitability will become increasingly challenging for the company. In addition, Chen highlighted during the earnings call that he will prioritize growth over profitability for the foreseeable future. That means losses will most likely increase over the next several quarters, weakening the company's balance sheet until growth initiatives in the cybersecurity and IoT segments become successful, which remains to be seen.

Despite those challenges, the market is already pricing in quite a bit of growth ahead. After the surge in the stock price following the second-quarter results, the company's market cap reached $6 billion. That corresponds to 8.6 years of the annualized second-quarter revenue, which takes into account the lack of revenue contribution from the part of the patent portfolio under negotiation.

Of course, you should consider that the pending patent transaction should bring extra cash BlackBerry can leverage to fund its growth. But you should also realize that the company's success depends on management's execution, which hasn't been stellar so far, given the underperformance in the cybersecurity businesses relative to the spectacular growth of some of its peers.

Thus, with significant losses becoming more likely going forward, I prefer to stay on the sidelines until the company's transformation materializes.