This beverage-making giant is recovering as economies are reopening, but does that make the stock a buy?

Coca-Cola (KO 0.03%), the international manufacturer and seller of beverages, reported third-quarter 2021 earnings at the end of October. That report highlighted its continued efforts to recover from disruptions caused by the coronavirus pandemic.

The company gets a majority (56%) of its sales from away-from-home channels, so when those establishments had to close temporarily or operate at reduced capacity, it adversely impacted Coca-Cola's business and its stock price. As the economy reopens, it can be argued that this majority segment of the business should recover. But will the stock as well?

Let's consider Coca-Cola's prospects after it reported third-quarter earnings and see if it's an excellent time to buy the stock. 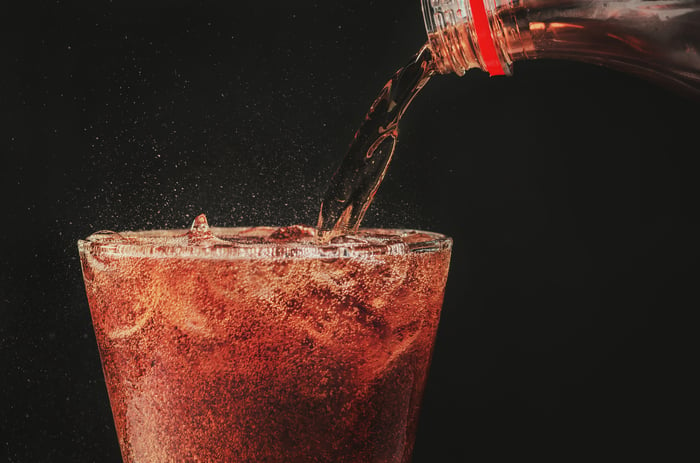 Coca-Cola is trading at a price-to-free-cash-flow ratio of 21. Image source: Getty Images.

Sales are rebounding, and that's good news for Coca-Cola

Coca-Cola increased revenue by 16% from the same quarter last year to reach a cool $10 billion in Q3. The pandemic caused sales to fall by 11.4% in fiscal 2020. This quarter marked the third consecutive where its revenue surpassed comparable quarters from 2019. Sales are not much higher from 2019, but it's a good sign that they are higher while the pandemic is still circulating.

Coca-Cola has a larger market share in places where people buy beverages to consume outside of the home (think restaurants, theme parks, sports stadiums). This means the company will gain an outsized benefit as economies continue on their path back to normal. And any setbacks on that path resulting from a rise in COVID-19 infections will mean the opposite. 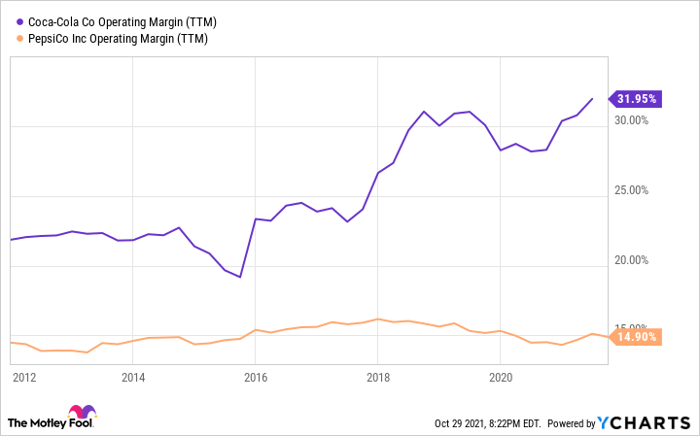 Coca-Cola management noted that profit margins would be negatively affected next fiscal year as it faces the brunt of worldwide supply chain disruptions. Bottlenecks caused by the coronavirus pandemic are leading to shortages of materials and labor. As is usually the case, when supplies decrease, prices increase. In all, Coca-Cola expects a headwind in the mid-single digits in fiscal 2022 from rising costs.

A once-in-a-decade opportunity for Coca-Cola stock

Coca-Cola could emerge out of the pandemic in a better position than it entered. According to management, the company has gained market share since 2019, and the overall industry is also growing -- although the statement can be taken with a bit of caution considering the source is the company itself. 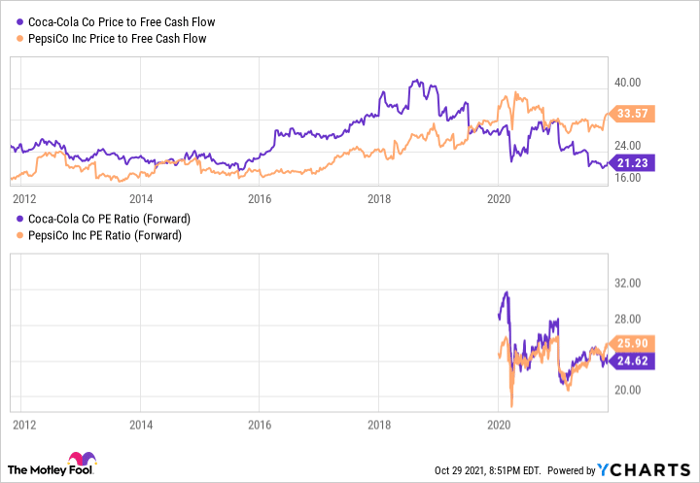 Moreover, Coca-Cola's stock is trading at a discount on several metrics historically and compared to its main rival PepsiCo. For instance, there haven't been many occasions in the last decade when you could buy Coca-Cola at a lower price-to-free-cash-flow ratio than PepsiCo, and the market is offering that opportunity right now. Considering that discount, Coca-Cola's overweighted benefits from reopening economies, and its historically high operating profit margins, this could very well be an excellent time to buy Coca-Cola stock.