Looking for an alternative crypto network with high upside, trading at a significant discount to its peak? Litecoin may fit the bill nicely.

Investors in the cryptocurrency world are increasingly focused on a number of factors when considering which tokens to invest in. Indeed, as part of a well-diversified portfolio, investing in a range of assets is preferred, in a bid to improve risk-adjusted returns. However, how to pick the best potential investments among a group -- that's a tougher question.

Among the key factors crypto investors want to consider are:

In this light, Litecoin (CRYPTO: LTC) may be a great investment opportunity right now. As the world's 14th-largest cryptocurrency by market cap , Litecoin has become a staple for many crypto portfolios due to its growing popularity. 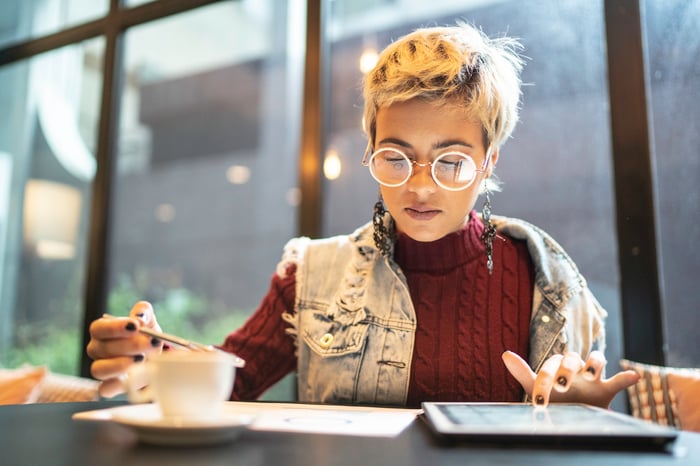 1. Litecoin is 4 times faster than Bitcoin

One of the primary reasons cryptocurrencies exist is to facilitate the transfer of money in a low-cost, expeditious way. In this regard, the faster a given crypto network can process transactions (and the lower the costs associated with these transactions), the greater the utility for the end-user.

In the case of Litecoin, this crypto network earns gold stars.

While not necessarily the fastest digital currency among the mega-cap cryptocurrency networks, Litecoin remains a great option for those looking to transfer significant sums of money. This crypto network has been shown to process transactions approximately four times faster than Bitcoin (BTC -1.10%). It's estimated that the block generation time on the Litecoin network is around 2.5 minutes, compared to 10 minutes for Bitcoin. That's a big difference. In fact, apart from a different choice of encryption algorithms, this tweak is arguably the most significant technical variance between the original Bitcoin codebase and the Litecoin clone.

Indeed, given the delays some of the largest cryptocurrency networks see during peak hours, it's likely that smaller, more flexible networks such as Litecoin will continue to see increased interest. Additionally, the relatively low fees on the Litecoin network are enticing for those using the network for transfers. Litecoin is a more convenient and economical option for those seeking to maximize their utility using this blockchain. For those investing in Litecoin, that's a big factor to consider.

Given the aforementioned factors playing into Litecoin's rise to prominence in the crypto world, it's unsurprising to see the value of LTC tokens take off recently. Despite nearly halving from May's peak, Litecoin tokens still represent a near double-up for investors who have held steady since the beginning of the year. Accordingly, crypto investors looking at tokens that are not only large but show signs of stability may want to consider Litecoin.

As of September 2021, it's estimated that 3,070 merchants accept Litecoin as a form of payment. That's substantial. Indeed, this kind of rapid adoption makes Litecoin one of the leading options for crypto investors seeking to invest in a cryptocurrency with real-world use cases.

Accordingly, the news that retail giant Walmart had accepted Litecoin as a payment option took the price of LTC on a wild ride in September. This announcement was one that some investors were prepared to take at face value. Litecoin's vast adoption thus far has been a great thing for investors in Litecoin. However, this announcement turned out to be fake, taking the price of Litecoin back to where it was before.

That said, this ordeal has shone a light on Litecoin's existing network of merchants as a key reason to own this cryptocurrency. The Litecoin network remains one of the fastest-growing and most widely accepted by merchants everywhere. A continuation of this trend is only likely to boost the value of Litecoin over time. At least, Litecoin bulls hope so.

The race to innovate within the crypto world remains an intriguing one to watch. Developers across various networks are scrambling to add value to their network in any way possible. Improving transaction speeds, lowering costs, and becoming more sustainable (environmentally and technically) are among the key goals developers are targeting right now.

Litecoin is certainly making a lot of headway on these fronts.

The Litecoin Foundation recently announced the launch of "OmniLite," a decentralized token creation platform.  OmniLite is a layered protocol on top of Litecoin's blockchain that benefits from Litecoin's impressive security and low fees.

Via OmniLite, it will be possible to mint stable coins based on the Litecoin blockchain. Various saturation issues with leading cryptocurrency networks such as Bitcoin and Ethereum have allowed for smaller networks to pick up the slack (and the market share) in this space. Accordingly, it's expected that via this launch, developers will have an incentive to utilize Litecoin's blockchain, reaping the benefits of lower fees and faster processing times to create a layered economy.

Litecoin remains an intriguing option for cryptocurrency investors willing to think outside the box. Sure, Bitcoin and Ethereum are likely to retain their status as core holdings for most investors in this sector. However, sprinkling in tokens from other blockchains that have proven (and growing) utility is never a bad idea.

That said, like its peers, investing in Litecoin carries risks. This cryptocurrency remains a competitor with a range of rival blockchains that are innovating and improving rapidly. The extent to which Litecoin can go beyond keeping up with the trendsetters and actually set the pace in this regard remains to be seen.

That said, Litecoin's value as an efficient network with low fees and high utilization among merchants ought to entice cryptocurrency enthusiasts to take a harder look at the token. This is certainly an alternative that I'm watching closely right now.

Litecoin Gets a Second Wind Heading Into 2023

3 Under-the-Radar Cryptocurrencies That Could Pop in Early 2023