These tokens provide a way to jump aboard two hot bandwagons.

You won't find many topics receiving as much buzz as the metaverse and cryptocurrencies. Large and small companies are scrambling to make their fortunes in the metaverse. The number of cryptocurrencies available for trading now tops 13,000. Some of them have made early investors sizable fortunes.

These two hot areas could be joined at the hip. Cryptocurrencies could be critical in monetizing the metaverse. And you don't have to wait for opportunities to profit. Here are three top metaverse cryptocurrencies you'll want on your watchlist. 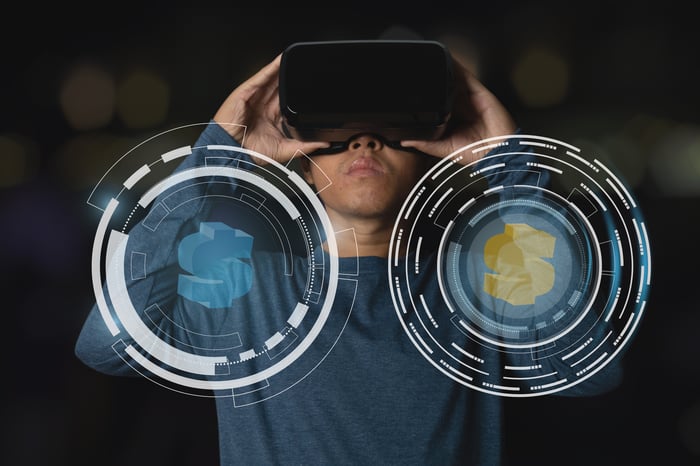 Axie Infinity (AXS) currently ranks as the No. 26 largest cryptocurrency, according to CoinMarketCap. Its market cap tops $7.8 billion with 60.9 tokens in circulation.

Built on the Ethereum blockchain, Axie Infinity is a battling game inspired by old-school Japanese video game Pokémon and the Tamagotchi digital pets. Players can create, raise, trade, and do battle with creatures called "Axies" that are non-fungible tokens (NFTs). Axies can be built from more than 500 body parts. They can breed up to seven times with other Axies to generate new offspring, which can be sold on the gaming platform.

Axie Infinity Shards serve as the governing token used in the Axie Infinity platform. Players can earn the tokens in several ways, including breeding Axies, competing in matches, and winning tournaments. AXS tokens also give players a vote in how funds in the community treasury are used. They can be staked to claim rewards as well.

This cryptocurrency has been a huge winner over the last 12 months, skyrocketing more than 29,700%. It hasn't performed as well in recent weeks, though, with only small gains.

Decentraland (MANA 3.84%) isn't far behind Axie Infinity at No. 31 on the list of the most popular cryptocurrencies. It has close to 1.8 billion tokens in circulation and a market cap of $7.2 billion.

Like Axie Infinity, Decentraland is a virtual reality platform built using the Ethereum blockchain. The virtual world inside Decentraland is called the Metaverse and is divided into 90,601 parcels of land -- each of which is an NFT. Users can develop their parcels and monetize them however they want.

MANA serves as the native cryptocurrency of Decentraland. It can be used to buy land parcels (LAND tokens), avatars, wearables, and more products on the platform's marketplace.

Over the last 12 months, the price of MANA has jumped 175%. Most of this gain has been made since late October.

Another metaverse token also stands out as one of the most popular cryptocurrencies on the market. The Sandbox (SAND -0.30%) currently ranks No. 44 with a market cap of $4.2 billion and more than 892 million tokens in circulation.

The Sandbox is similar to Decentraland in several respects. It's a virtual world based on the Ethereum blockchain. It allows users to buy and sell NFT parcels of land that they can develop and monetize, including creating games that can be played by other users.

SAND is the utility token used within The Sandbox ecosystem. The maximum supply of the token has been set at 3 billion. Players use SAND to buy digital assets, play games within the virtual world, and participate in decentralized governance.

The Sandbox has delivered an impressive gain of more than 10,300% over the last 12 months. As was the case with Decentraland, SAND has been an especially big winner since late October with the token jumping more than 6X in value.