Shares of Millennial Media hit a 52-week low yesterday. Let's take a look at how it got here to find out whether there are still cloudy skies ahead.

How it got here
Millennial hasn't had an easy time since its IPO earlier this year, but neither have many other online-focused companies that have recently gone public. Even Google , Millennial's biggest mobile advertising competitor, has had a rough go of it in the months since Millennial's debut: 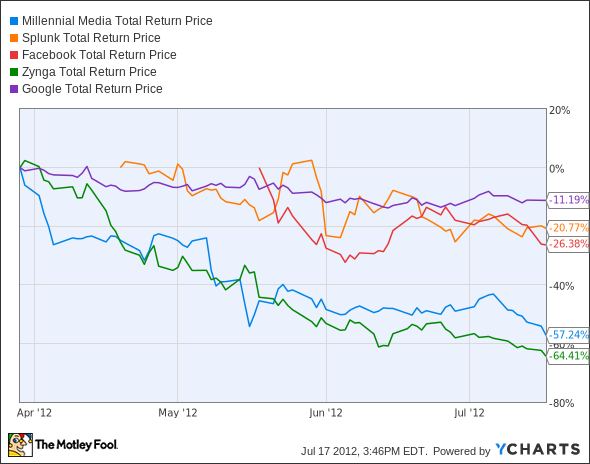 Only Zynga has had a worse run this year, but unlike Millennial, Zynga's maintained positive cash flow lately. Millennial's latched itself to Zynga's mast (if only loosely) by helping the social game maker serve up its mobile marketing.

What you need to know
What's behind these woeful performances? A look at some quick metrics can help us figure out what's going on. It's not a complete picture, but it's a good starting point.

Not only is Millennial the only member of this group with negative free cash flow, it also has the lowest R&D spending ratio, and a lower level of insider ownership, than its peers and competitors. Keep in mind that Mark Zuckerberg owns the majority of Facebook's voting stock, but this is held in a different class of share that isn't available to the public and thus doesn't show up accurately on insider ownership reports. Zynga CEO Mark Pincus has a similar arrangement, which maintains his control despite having already sold off major chunks of his super-shares.

Whatever the reason, there's a lot of investor apathy around the market's latest crop of dotcom darlings. Millennial saw nice growth on its top line for its first public quarter, but it didn't stop the slide. Splunk posted stronger revenue growth than Millennial in its first public report, but went kerplunk anyway, as my colleague Rick Munarriz so succinctly put it.

Millennial should, at least in theory, be doing a bit better than it has been, as it's the only company in this bunch dedicated to mobile content. But if Google can pull away with the mobile-ad lead, and if Facebook can successfully make the mobile move, Millennial's future might be in jeopardy. It could wind up an acquisition target for either of these two big players -- its price-to-sales ratio is a third of Facebook's, so any hint of profitability could make it look very attractive.

What's next?
The sad fact is that hot IPOs are rarely worth your money, but after falling so far, Millennial might be near a turnaround. The company's next slated to report earnings on August 1. With news on the ground scarce, this will probably be Millennial's biggest chance to convince investors that it's worth buying for the next few months.

The Motley Fool's CAPS community isn't too keen on Millennial Media. The company's earned a lowly one-star rating, with a handful of CAPS players chiming in split eight to six on whether it will grow or continue to tank.

Interested in tracking this stock as it continues on its path? Add Millennial Media to your Watchlist now, for all the news we Fools can find, delivered to your inbox as it happens. If you're looking for a hot IPO that's actually worth it, take a look at the Fool's latest free report on the tech IPO you should be buying instead of Facebook. Don't wait for it to take off -- claim your free copy of this important report now.