This series, brought to you by Yahoo! Finance, looks at which upgrades and downgrades make sense, and which ones investors should act on. Today, our headlines feature higher price targets for both Microsoft (NASDAQ:MSFT) and Cabela's (NYSE: CAB), while Raytheon (NYSE:RTN) reels from a downgrade. Let's dive right in.

The big news in tech last week was undoubtedly Steve Ballmer's announcement that he's retiring from the CEO post at Microsoft. Investors cheered Ballmer's departure, hoping it will herald a new day, and new growth rate, for a company that's been mostly moribund for years. (Microsoft's chart is that barely visible, blue flatline at the bottom). 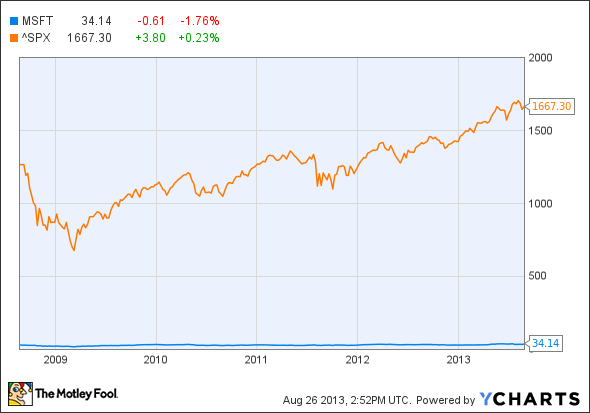 Microsoft's underperformance under Ballmer's leadership hasn't gone unnoticed on Wall Street, either. Over at Wells Fargo, analysts are suggesting Microsoft may poach its next CEO from Nokia, bringing former Microsoft exec Steven Elop back in-house. This, and other rumors for a revival at Mr. Softy may explain why banker BMO Capital Markets decided to hike its price target on Microsoft to $37 this morning.

Is Microsoft worth that much? Possibly. The stock costs about 13.2 times earnings today, pays a 2.6% dividend, as is projected to grow earnings at a bit less than 9% annually over the next five years. These numbers alone don't suggest Microsoft is underpriced, however. To reach the conclusion that Microsoft is "cheap," you need to also factor in the company's $60 billion cash hoard, and its copious free cash flows (which currently run 12% ahead of reported GAAP earnings).

Combined, those factors add up to an enterprise value-to-free-cash-flow ratio of 9.2. And they suggest BMO is right -- that's an attractive price on a near-9% grower with a 2.6% dividend.

Hunting for value at Cabela's
A second stock getting a jolt from Wall Street optimism this morning is outdoor superstore Cabela's. Cabela's "beat earnings" a month ago, earning $0.62 where only $0.61 was expected. Northland Capital just upped its price target on the stock by $5 today, and says it expects to see Cabela's reach $85 a share within a year. Here, though, I think the analyst is being overoptimistic.

If Cabela's is expected to grow faster than Microsoft (and it is -- analysts posit a 17% long-term growth rate), then it carries a correspondingly high price tag. The stock's trailing P/E sits north of 23 right now, and with a heavy debt load ($2.5 billion, net of cash) and weak free cash flow ($84 million, versus reported "net income" of $205 million), Cabela's is even more expensive when valued on enterprise value-to-free-cash-flow.

Fact is, I get an EV/FCF ratio of more than 85 on this highflier -- and that's a price too high for almost any realistic growth rate to justify. Long story short, Northland may expect this stock to climb even higher, but I'd lay money on the likelihood that Cabela's must fall.

Will Raytheon misfire?
And last but not least, we come to what's probably one of my favorite defense businesses -- Raytheon.

Priced at 13.5 times earnings, the rocket maker's not horrendously expensive. But with a projected growth rate of just 7%, and a healthy, but not overly generous, dividend yield of 2.8%, Raytheon's not obviously cheap, either. Bright and early Monday morning, analysts at ace stock shop Stifel Nicolaus took a look at these numbers and decided they see no compelling reason to buy Raytheon anymore, and downgraded the stock to "hold."

And honestly, that looks like the right call to me. I still see a lot to like in Raytheon's business -- a successful international arms operation, for example, that outclasses the rest of the industry, and positions Raytheon well to ride out the sequester. But the simple fact is, that after outperforming the rest of the S&P 500 by a good 20 points over the past year, Raytheon stock is no longer cheap. The stock currently trades for 11.4 times free cash flow, which in light of its slow growth rate and modest dividend yield, looks appropriate ... or even a bit generous.

Long story short, Stifel Nicolaus was right to recommend buying Raytheon last time. It's right again today, when it tells us that the stock is no longer cheap enough to be attractive, and issues the appropriate downgrade.

Motley Fool contributor Rich Smith has no position in any stocks mentioned. The Motley Fool owns shares of Microsoft and Raytheon.