In October, Netflix, (NASDAQ:NFLX) reported disappointing Q3 subscriber growth and offered an uncharacteristically weak outlook for Q4 subscriber trends. Netflix stock had already been retreating from the all-time high of $489.29 it set in September, but the weak earnings report turned that retreat into a rout. 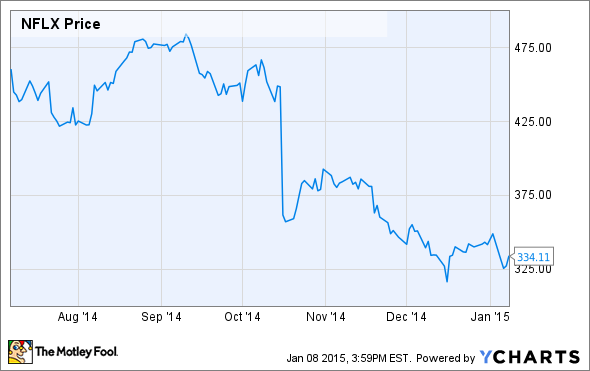 Netflix earnings estimates have also fallen based on the company's Q3 results and Q4 guidance. In the past 90 days, the average 2015 EPS estimate among Wall Street analysts has dropped from $6.59 to $4.68. However, barring a sudden return to faster subscriber growth, Netflix's 2015 earnings results will probably be even worse than what analysts are currently expecting.

Management blamed the shortfall on the price increase that went into effect last spring. (New subscribers now pay $8.99/month, up from $7.99, while existing subscribers get to keep the old rate for 2 years.) Netflix also projected that slower member growth would continue in Q4, with net additions down from 2.33 million in Q4 2013 to 1.85 million.

In Q3, cost of revenues in the domestic streaming segment -- a cost item that primarily represents content expense -- rose $91.3 million year-over-year to $565.3 million. Annualized, that equates to a $365 million cost increase. At an average subscription cost of $8.99/month, Netflix needs to add nearly 3.4 million subscribers to offset that increase.

This will still lead to higher domestic contribution profit, but it would be slower domestic profit growth than what Netflix has achieved in the past 2 years. This reality was reflected in Netflix's guidance that domestic contribution margins will grow 200 basis points per year going forward. By contrast, in the past few years Netflix has easily beaten its guidance for 400 basis points of annual domestic margin growth.

At the same time that domestic profit growth slows, Netflix will continue to rack up big losses outside the U.S. Between Q4 2012 and Q2 2014, Netflix narrowed its international contribution loss from $105 million to $15 million by slowing its expansion to new countries.

However, Netflix made a big move into continental Europe in September, launching service in Austria, Belgium, France, Germany, Luxembourg, and Switzerland. The initial launch costs caused Netflix's international contribution loss to rise to $31 million in Q3. Netflix has projected that these losses could spike to $95 million in Q4, as it will have to pay for a full quarter of content costs.

Netflix has shown in the past that it can reduce international losses relatively quickly after entering new markets by growing revenue faster than content costs. Nevertheless, given the size of the expected Q4 loss, it could take until 2016 for Netflix to break even outside the U.S.

Furthermore, Netflix has already announced plans to expand to Australia and New Zealand in March. This is a significantly smaller expansion, but it will still add to Netflix's international losses this year. If Netflix adds other new markets this fall -- and CFO David Wells has hinted that it will -- that will drive the 2015 international contribution loss even higher.

The Netflix October forecast implies that the company will post a $176 million international contribution loss for 2014. Given that it is starting 2015 at a much higher baseline loss and its profit improvements in existing markets will be offset (at least to some extent) by new market entries, Netflix's full-year international contribution loss is likely to increase in 2015.

Indeed, DVD profit fell by $99 million from 2012 to 2013, and it is on track to fall again by about $70 million from 2013 to 2014. Given the ongoing subscriber losses, another drop in profit (of perhaps $50 million) is virtually certain for 2015. Domestic and international streaming contribution profits are the two primary drivers of Netflix's earnings. However, the declining DVD business and rising overhead expenses are a constant drag on Netflix's profitability.

Netflix has already revealed that total compensation for its top 5 executives (including salary, stock options, and target bonuses) will rise from $18 million in 2014 to $43.6 million in 2015. Netflix also typically gives employees pay raises at the beginning of each year and will undoubtedly add personnel to keep up with its global growth. Overhead costs could thus easily rise by $150 million this year.

To sum up, Netflix is likely to face a $200 million headwind from rising overhead costs and the steady decline of the DVD business. At the same time, slower domestic subscriber growth will lead to a smaller profit increase there, while Netflix's rapid international expansion is likely to drive a larger international contribution loss.

The net result is that barring a sudden upturn in Netflix's subscriber growth trajectory, Netflix will report lower earnings in 2015 than in 2014. However, while the average analyst EPS estimate has fallen by 29% in the last 90 days, it still implies 37% year-over-year growth.

An EPS decline in 2015 doesn't mean that Netflix's business is fundamentally unhealthy -- rather, it reflects the high short-term cost of growth. Nevertheless, it does beg the question of how long it will take for Netflix to produce significant profits.

Netflix's slowing domestic growth along with its rising content commitments will also make it difficult to reach the company's stated goal of a 40% domestic streaming contribution margin. Unless subscriber growth comes in far ahead of guidance when Netflix reports Q4 earnings later this month, Netflix stock could fall even further.

Prepare To Be Disappointed By Netflix Inc. @themotleyfool #stocks $NFLX Next Article
Current