First came Apple's (NASDAQ:AAPL) Siri, next was Google Now, and then Microsoft's Cortana. And now we have Facebook's (NASDAQ:FB) M, an artificially intelligent personal digital assistant that has just a bit of an advantage over the AIs that have come before it.

Not because it has more data (yet) or because Facebook is better at AI (though it might be), but because the social media juggernaut is doing something different with its assistant that other tech companies aren't doing: supplementing it with human intelligence. 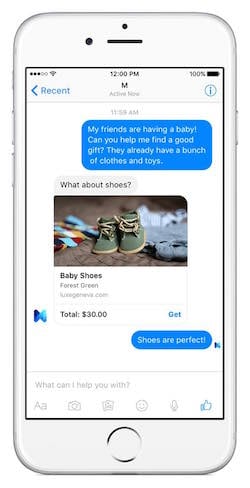 AI, with a human touch
Facebook's new virtual assistant is tied directly to the company's Messenger app, and debuted to just a few hundred people in the San Francisco Bay Area earlier this week, with the idea that the service will eventually come to all Messenger users.

Like the other virtual assistants, M can take requests for the best place to find a burger or do things like find a dog-friendly park for Fido. Users interact with M just like they would their friends in a Messenger chat -- instead of by voice commands -- and there are some other key differences between it and the other assistants as well.

Specifically, M can make more complicated reservations than Siri, like booking a trip, suggest gifts for a birthday or celebration, and can also ask follow-up questions in order to better understand what you're saying. That's the human advantage after all. Facebook calls its human helpers M Trainers, and they can take your place on calls to your cable company, then kick it back to you when a customer service rep gets on the line.

iPhone users are usually the first to admit the problems Siri has with understanding verbal commands, not to mention context. And while Apple's already revealed improvements for Siri in iOS 9 -- like in-app searching and predictive suggestions -- in light of M's capabilities, it hardly seems like enough now.

Adding the human element, even if it's not for every interaction, is a tad ingenious on Facebook's part. There are some things that our virtual assistants can't do for us yet, and for those tasks, M will defer to warm-blooded, neuro-transmitting, human beings. The best of both worlds
Not only does M bring in humans when it needs to, but its artificial intelligence also learns from earlier conversations. According to Wired, M will make suggestions to your questions based on previous interactions you've had with it.

Once M learns enough, which could take a while, the assistant might function completely on its own. But until then, it's clear Facebook has stumbled on a clear need in the personal digital assistant world by adding in human assistance until the AI learns enough to stand alone.

And because of that, M will likely be a few steps ahead of Siri and the others for quite some time. That is, if the company can scale M to all of Messenger's 700 million monthly active users.

Skimming off the top
For Facebook, it's not just about beating the other virtual assistants. It wants to use M to make money for Messenger, too. The idea is for users to rely on M to help set their plans, make phone calls, get items delivered, make reservations, and hopefully spend money doing so. That way, M can eventually take a cut of the transaction.

David Marcus, Facebook's vice president of messaging, told Wired this week that M will start capturing a user's intent and "intent often leads to buying something, or to a transaction, and that's an opportunity for us to [make money] over time."

Clearly, it's too early to begin estimating how much revenue M could bring in, especially considering that the assistant isn't even available to all of Facebook Messenger's users yet. But it's easy to imagine M becoming a very useful tool for its users, picking up where Siri and the others have left off and eventually making money for Facebook at the same time. And if it ever gets there, Apple, Google, and Microsoft should all be very worried.