Please ensure Javascript is enabled for purposes of website accessibility
Log In Help Join The Motley Fool
Free Article Join Over 1 Million Premium Members And Get More In-Depth Stock Guidance and Research
By Jason Hall - Sep 11, 2015 at 7:01AM

Heavy-duty truck maker PACCAR's stock has been pummeled -- in the middle of a strong cyclical recovery for the industry.

Until last year, heavy-duty truck sales were going through one of the worst cyclical downturns in more than a decade, before bouncing back with a relatively strong 2014. And since mid-2012, leading heavy-duty truck and tractor maker PACCAR (PCAR 0.31%) has been on a roll, growing revenue steadily, while sharply increasing earnings per share: 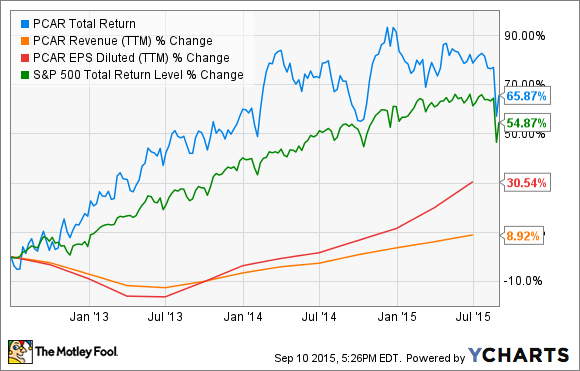 Combined with a steady quarterly dividend, and a special yearly dividend it's been able to increase every year since the end of the recession, PACCAR shareholders have done very well over the past several years. But since January, PACCAR shares are down almost 16%, and it's looking more and more like one of the few bargains to be found. Let's talk about why.

Cyclical recovery in heavy truck sales under way
Heavy-truck sales tend to go through cycles lasting years at a time, like many other industrial and durable goods. This is because they can last a decade or more before needing to be replaced, and because of the expense and long-lived nature of these assets, operators tend to go through very long and deliberate cycles of use and replacement.

And it tends to correlate heavily with larger economic patterns; after all, these vehicles exist, essentially, only to convey the goods that drive the economy. Whether it's a truck taking a load of goods to a grocery store, hauling cars to a dealership, or taking an intermodal container from a port to a train depot, these trucks are moving the goods that drive the economy.

So, when the economy isn't growing, truckers don't replace or expand their fleets, and often will delay things as long as possible, waiting for business to improve, before investing in new gear. Conversely, this can create significant pent-up demand when things do recover, and frankly, that's where we are today, especially in North America. And that bodes very well for PACCAR.

Coming into 2014, North American class 8 truck sales were around 200,000 annually for the prior several years, significantly below the 250,000 that is generally regarded as indicative of a healthy heavy-truck market. Sales really began ramping up at the end of last year, and most estimates put 2014 sales well over 250,000, and orders over the past 12 months closer to 300,000.

What this means for PACCAR
PACCAR commands strong market share in North America with its Peterbilt and Kenworth nameplates, with a combined 28% of the U.S. and Canadian markets. In Europe, the company's DAF Trucks holds about 15% market share. In short, PACCAR will be one of the biggest beneficiaries of this rebound.

The company reported record earnings in the second quarter, with earnings per share of $1.26, a 40% increase from the year-ago quarter. Since then -- July 28 -- PACCAR's stock is down almost 11%.

The thing is, it's not like investors should be "calling a top" here, either. After all, PACCAR -- and most of the rest of the industry -- is predicting full-year sales in both North America and Europe to outpace last year's totals. Europe is expected to see 240,000-260,000 heavy-duty trucks sold in 2015, while North American truck sales could top 290,000 on strong demand.

Why PACCAR is a bargain right now
There's a two-fold reason why PACCAR is a great buy today. First, the company's business prospects are incredibly strong. Not only is there several years' worth of pent-up demand for replacement vehicles, but shipping volume -- especially in North America -- is up. PACCAR CEO Ron Armstrong noted on the last earnings call that U.S. freight tonnage is at record levels, being driven by strong auto sales, and a 10% increase in housing starts versus last year.

Armstrong also noted that freight mileage is up in Germany over the past year and that the U.K.'s economy is expected to grow more than 2% this year. These two are notable because Germany is Europe's strongest economy and a major manufacturing hub, and the U.K. is PACCAR's largest market in Europe.

Additionally, the sell-off over the past nine months has put PACCAR shares on sale: 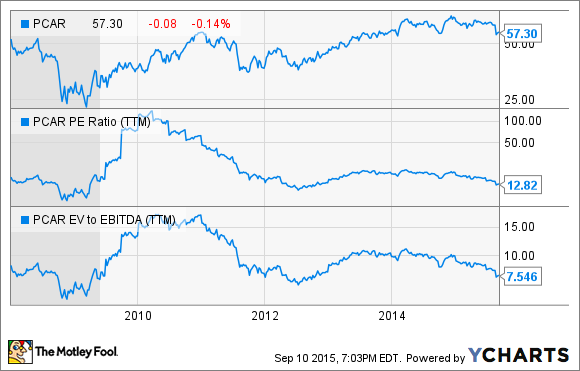 Here's a more short-term look, to highlight the message: 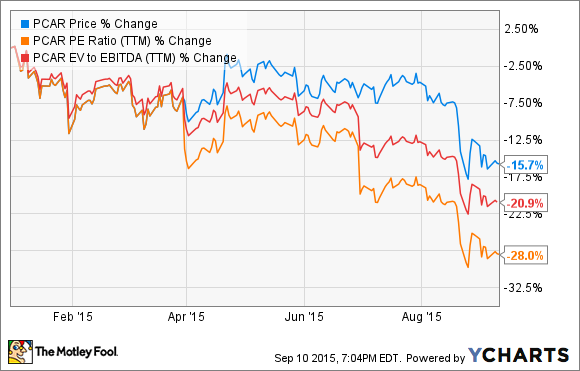 What does it tell us when a company's stock price falls sharply, but valuation metrics like price to earnings and enterprise value to EBITDA fall even more?

In short, it tells us that a company's earnings power hasn't declined over that period and that it might have actually increased. That's actually the case for PACCAR, having reported record earnings in recent quarters, while the market sold off its stock, pushing the price down.

While sometimes this is the "correction" of a stock that got ahead of itself and is now falling back to a more rational value, in this case it looks a lot like a market that's created a great opportunity to buy.

Loading up the truck?
With a trailing price to earnings multiple of below 13, PACCAR is definitely in bargain territory, especially if truck sales hold up -- and grow -- over the next few years, which looks likely. Mix in a 3.3% dividend yield that's likely to grow in coming years and PACCAR looks even more enticing.

Here's the caveat: The company is exposed to a cyclical industry. So, while it looks to be on an upswing -- and I'm relatively convinced that's going to be the case for the next several years -- it's a stock that will go through cyclical ups and downs. But with solid management, strong market share, and a loyal customer base, PACCAR -- at these valuations -- should make for a solid long-term investment.

DAF is helping drive results across the pond for PACCAR. Source: PACCAR.