Please ensure Javascript is enabled for purposes of website accessibility
Log In Help Join The Motley Fool
Free Article Join Over 1 Million Premium Members And Get More In-Depth Stock Guidance and Research
By Cory Renauer - Feb 23, 2016 at 7:02AM

Does the pharmaceutical pure-play, or the healthcare conglomerate make a better investment?

The new year has been rough on Eli Lilly (LLY -2.66%) stock. After an impressive run-up last summer, those gains have been wiped out by a wave of pessimism that wounded the entire SPDR S&P Pharmaceuticals (XPH -2.05%) index. Buoyed by large consumer goods and medical device segments, Johnson & Johnson (JNJ -2.20%) stock has largely avoided the pharmaceutical carnage and is basically flat for the year. 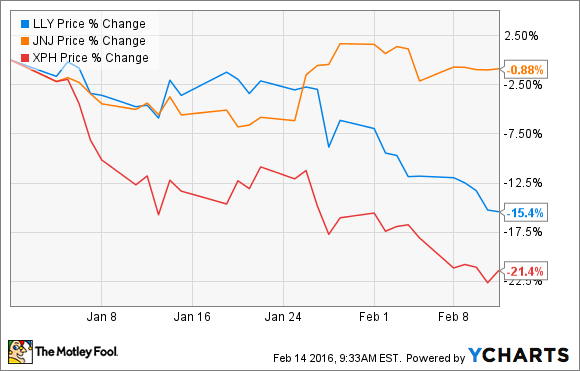 Of course, recent stock performance is a poor predictor of future returns. Let's dive a bit deeper to see which of these two is a better buy.

Value focus
Although Eli Lilly shares have taken a pounding lately, they're still trading at a significant premium to the broader market. At about 19.5 times consensus 2016 estimates, they're well above the S&P 500 average of 15.25. 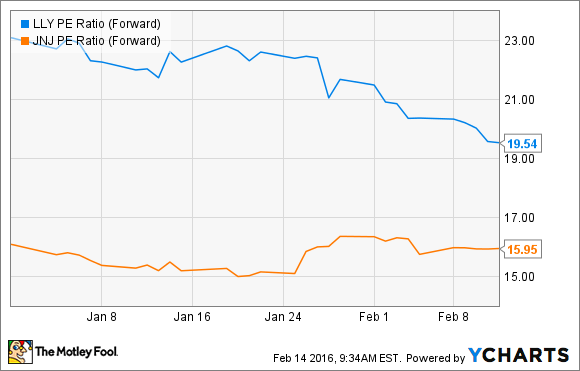 In contrast, Johnson and Johnson's forward P/E Ratio of about 16 is just north of the broad market average.

Although Eli Lilly recently took on Novartis' animal health operations, it's mainly a pharmaceutical company. Measuring its P/E Ratio against a conglomerate with medical device and consumer goods segments is a bit like comparing apples to oranges. To put them on more even footing consider their PEG Ratios: 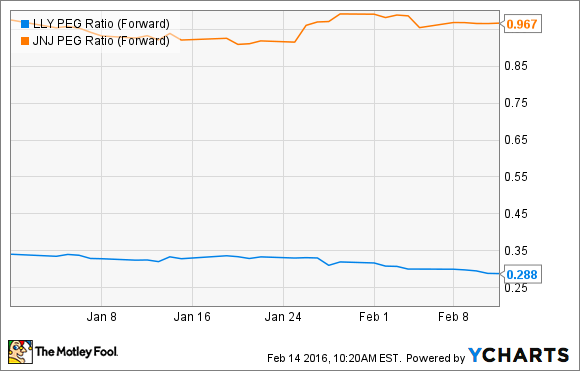 Measured as the forward P/E ratio divided by the expected earnings-per-share growth percentage during the period, stocks with forward PEG ratios below 1.0 are widely considered undervalued. Johnson & Johnson falls into this territory, but based on this measurement Eli Lilly is far more attractive.

Looking ahead
Before we get too worked up, it's important to understand what's expected to drive growth for these two in the year ahead, and beyond.

Eli Lilly's revealed its ace in the hole last November when a study of its type 2 diabetes pill, Jardiance produced some eye-popping data. After following more than 7,000 patients for about 3 years, those taking Jardiance showed a 38% reduced risk of death from heart attack or stroke, and a 35% reduced risk of hospitalization for heart failure. To date no glucose lowering medication has been shown to significantly reduce the risk of cardiovascular events in a study like this, and Lilly's shares popped following the announcement.

An estimated 387 million people worldwide have some form of diabetes, and at least 90% suffer from the type 2 variety. Two of three diabetics die from heart disease or stroke, which means Jardiance could literally save millions of lives. From a healthcare end-payer's point of view, its ability to reduce hospitalizations could relax some overstretched budgets.

You might expect health insurers would be practically demanding physicians to prescribe it to all eligible patients, but they're not. In fact, fourth quarter Jardiance sales of just $15 million were slightly lower than in the third quarter. Curiously enough, Johnson & Johnson's Invokana is in the same class, with the same indication, and managed to rack up sales of $1.3 billion last year, without the benefit of groundbreaking cardiovascular outcome data.

Lilly's compelling PEG Ratio is based on consensus growth estimates. Jardiance sales growth based on its outcome study are probably a large part of those estimates. Lilly's abysmal performance marketing Jardiance thus far could be one reason investors are willing to pay a great deal more for Johnson & Johnson's expected growth.

Dividend focus
Those of you interested in a steadily growing source of income, might have noticed both stocks boast a 2.9% dividend yield. I'm afraid the similarities stop there. After freezing its dividend in 2009, Lilly just began raising it again. In stark contrast, Johnson & Johnson shareholders have enjoyed larger payouts for 53 consecutive years. 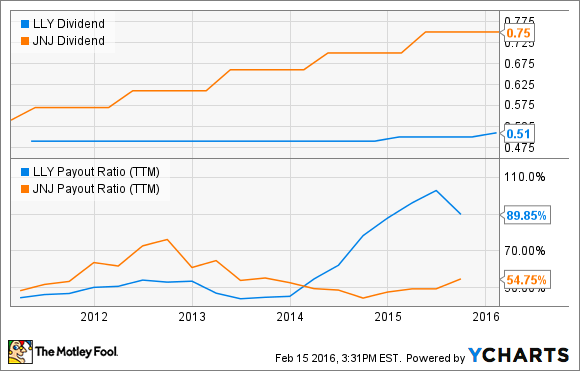 If you're hoping for some big distribution hikes from Lilly in the years ahead, you'll probably be disappointed. The percentage of profits required to make payments, or the payout ratio, is dangerously high. Johnson & Johnson on the other hand, has plenty of runway to keep increasing payments at a healthy pace.

What happened
Several years ago Johnson & Johnson's pharmaceutical segment realized its early stage R&D efforts were terribly inefficient. In response it cut its internal R&D budget and began focusing on external collaborations and bolt-on deals. It turns out that having lots of capital is great for rushing promising drugs through the expensive late-development stages, and into the hands of patients. 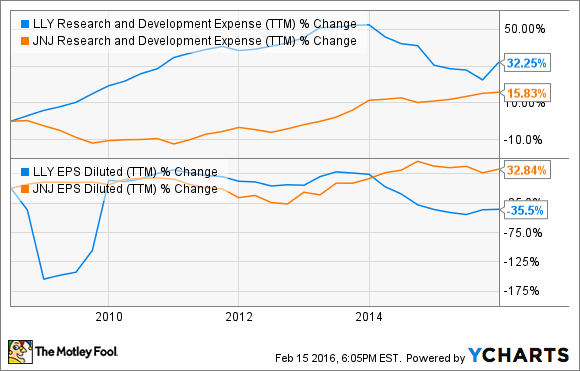 The company's earnings-per-share have fallen more than 35% during Lechleiter's tenure. How he's managed to keep his job is one of life's great mysteries, but which of these two is a better buy is clear. Lilly's compelling PEG Ratio could result in quick gains if those earnings estimates are realized, and if market sentiment improves. Those are some big "ifs". Over the long term, I'm confident Johnson & Johnson stock is a far better buy.