Please ensure Javascript is enabled for purposes of website accessibility
Log In Help Join The Motley Fool
Free Article Join Over 1 Million Premium Members And Get More In-Depth Stock Guidance and Research
By Reuben Gregg Brewer - May 10, 2016 at 9:47AM

Alcoa's first quarter was nothing to write home about, but there are some important takeaways just the same.

The big news at Aloca (AA) remains its pending breakup into an aluminum company and a specialty parts maker. But it's not there yet, and what's going on today at both of those businesses will be the foundation on which they each start their new lives. That's why these five takeaways from the first quarter are so important.

1. It wasn't great, but it wasn't bad
According to Alcoa CFO William Oplinger, "First-quarter 2016 revenue totaled $4.9 billion, down approximately 15% year over year. Organic growth and growth from the recent acquisitions was offset by lower alumina and metal pricing and the impact of divested and closed businesses." The actual earnings number? Zero. That compares with $0.14 a share last year.

Take out one-time items, though, and Alcoa made roughly $0.07 a share. That beat the $0.02 per share analysts had been expecting. But it's still hard to call the company's top- and bottom-line results good. They were, at best, better than expected. This high-level look, however, misses a lot of moving parts. 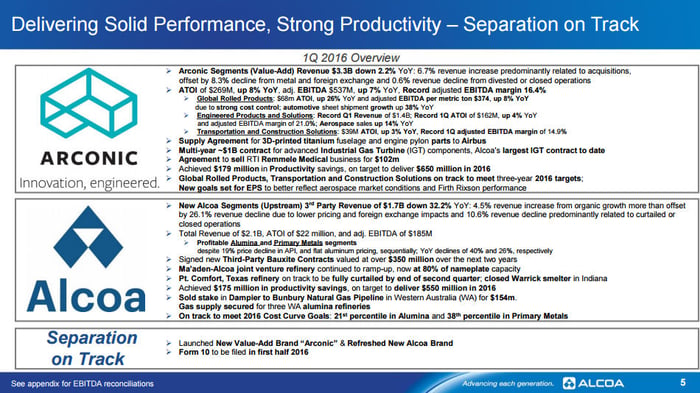 2. On track to bust it up
The biggest moving part, of course, is the company's pending split into an aluminum maker and a specialty parts maker. On that score, CEO Klaus Kleinfeld explained: "We are on course for the second half of 2016. There's a lot of detailed work going into separating a 120-year-old firm." Don't underestimate that second sentence, since getting the breakup right could be the difference between an easy transition and a rough one.

Perhaps more important for investors, however, is that, according to Kleinfeld, "We have for your digestion actually separated out Arconic, as the new value-add company will be called, and new Alcoa [to give] you a better taste for the future [of the] two firms." With the breakup just around the corner, you'll want to pay increasing attention to the individual performances here.

3. How's Arconic doing?
Arconic is the name of the specialty parts business. According to the CEO: "Revenue, $3.3 billion, down 2.2% overall. Now this is really a combination of the growth of 6.7% predominately acquisition related and a decline of 8.3% from metals and FX changes and also minus 0.6% from divestitures or closing of operations." Further: "Profits are up 8%. Record adjusted EBITDA margin of 16.4%."

Generally speaking, despite a difficult market, Arconic performed reasonably well. More important, perhaps, is that it was able to sign a few supply agreements in the quarter. So from a big-picture perspective, the company's specialty parts business, which it only began to build up just a few years ago, looks like it will be ready to fly solo later this year.

4. Not exactly soaring
That said, Arconic may not fly at quite the altitude as many had hoped. For example, the CFO noted: "As we look to the second quarter, we expect the aerospace market to remain solid. However, it'll be tampered by declines in legacy program deliveries, careful new program ramp-ups and inventory management at OEMs." Looking further out, CEO Kleinfeld noted: "Aerospace, we project 6% to 8% growth this year. This is a little lower than our 8% to 9% that we saw for this year earlier in the year." 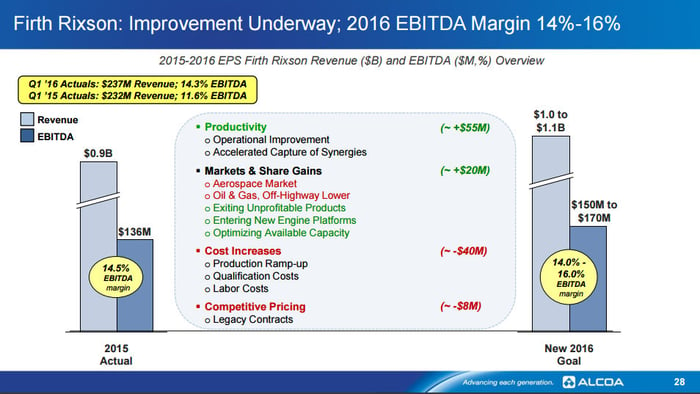 Firth Rixson not as going as expected, but improving. Image source: Alcoa.

There are two things going into that. First is the information that CFO Oplinger shared about legacy programs and the slow ramp-up of new programs. But the Firth Rixon business, which was acquired in late 2014, isn't progressing as well as hoped. This business makes engine parts and was a key piece of the company's separation plans. Operations appear to be getting back on track, but keep an eye on the integration of this business just the same. The real takeaway here, however, is that Arconic is doing fine, just not as well as expected when the year started off.

5. Old is new again
The last big takeaway, then, is old Alcoa, or, as it's being called, New Alcoa -- that would be the aluminum maker. According to the CEO: "[T]hird-party revenues of $1.7 billion, down 32%. This also is a combination of growth of 4.5%, offset by 26% to lower prices and FX and another 10.6% to the curtailment and closures of operations." In other words, it's still rough out there for commodity players.

However, a more important takeaway for investors was this simple comment from Kleinfeld, "Both segments are profitable." There has been a huge amount of work put in to trim down New Alcoa so it could better compete in today's commodity market. It hasn't been easy, and the process isn't over yet. But the aggressive moves are having the intended effect. So, like Arconic, it looks like New Alcoa will ready to stand on its own, too, when the time comes.

After all was said and done, there was some new information at Alcoa, as it stands today, but the story really hasn't changed all that much. Yes, Arconic's outlook isn't quite as bright as it was at the start of the year, but it's still doing pretty well. New Alcoa, meanwhile, continues to work hard to position itself for the tough market it's facing today -- but it's making important headway. Not exactly a great quarter, but definitely not a bad one.