The news of the day has been filled with a high-profile employee testifying about whether his boss asked him to do something that may not have been ethical.

Without looking at the politics or making any assumption of right or wrong in any specific case, it's worth examining what you should do if placed in an uncomfortable work situation. What if your boss asks you to lie or if he or she tries to get you to ignore improper behavior? That's not an easy situation for anyone to deal with, but it's one that has to be handled correctly. 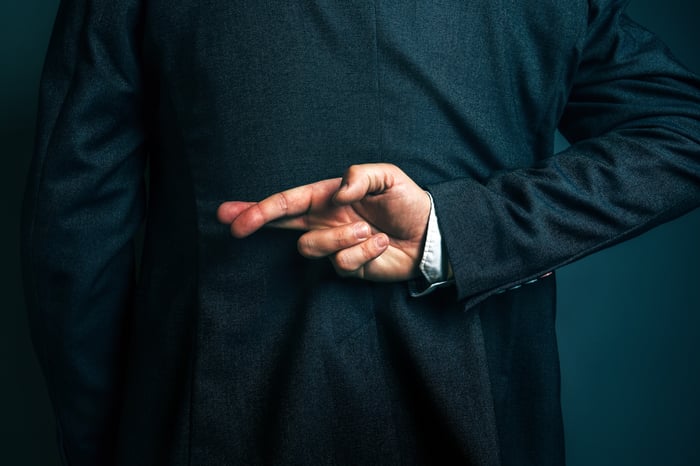 How you deal with a boss asking you to lie depends on the action he is lying about. Image source: Getty Images.

If your boss asks you not tell anyone that he took the last cup of coffee without making a new pot or that he ducked out half an hour early to catch his kid's baseball game, those lies probably don't impact his or her job or yours. If, however, your boss wants you to cover up or overlook actual impropriety -- like stealing, leaving early often, or claiming to be places he or she isn't -- that's a different case entirely.

It's a matter of judgment and degrees. If it's a minor deception that would not be a case for significant discipline if it was discovered then it's probably OK to let it go. If, however, your boss has cooked the books, stolen, or want you to cover up something like sexual harassment, it's important to do the right thing.

If your boss puts you in a position where he or she asks you to cover up actual, not minor, wrongdoing, you have to report him or her. That means going to human resources (HR) at a larger company or going over his or head if you work at a company too small to have an HR department.

If your boss is the owner of the company and there's nobody to turn to, what you do depends upon the transgression. If you're being asked to cover up an actual crime -- something like billing clients for services not rendered -- then you have to report it to the appropriate authorities. Local police may not do very much, if anything, with such a report, but at least if any legal actions occur you will have gone on the record as not being complicit.

If you work at a small company and have to go to the police or other authorities to report on your boss, it's probably best to leave the job. Even if you need the work, staying with an employer you believe is not only lying, but committing crimes and asking you to cover them up is a very bad idea.

If you work at a larger company, it's possible that HR will handle the problem, discipline the boss involved, and shield you. That's the likely result at a large, well-run company, but it's not always going to be what happens.

In some cases blowing the whistle will not have the desired effect. Your boss may get away with it and you could end up the person out of a job. That's a harsh reality, but one that does not mean you should not do the right thing -- even if only to protect yourself should the situation escalate.

There's nothing easy about having a dishonest boss who attempts to involve you in his or her deceptions, even if just by asking you to not say anything. In the long run, however, your responsibility is to yourself, not to someone not only willing to compromise their own integrity but yours as well.