Please ensure Javascript is enabled for purposes of website accessibility
Log In Help Join The Motley Fool
Free Article Join Over 1 Million Premium Members And Get More In-Depth Stock Guidance and Research
By Daniel B. Kline, Selena Maranjian, and Maurie Backman - Jun 18, 2017 at 10:22AM

There are a few things that will kill your chances of getting the job dead.

A job interview often happens after an applicant has cleared several hurdles, but this last step can feel like an impenetrable wall.

That's probably because many people are not all that experienced at selling themselves. Interviewing for a position puts the job seeker in a sometimes awkward position. You have to push your own qualifications without coming off as arrogant. It's a situation unlike most others: Even a single question can hurt (or derail) your chances of getting the job.

There are lots of things you can do to win the job at an interview, and there's no one recipe for succeeding. When it comes to failing, though, there are a few things that ruin your chances every time. These are three you should work hard to avoid. 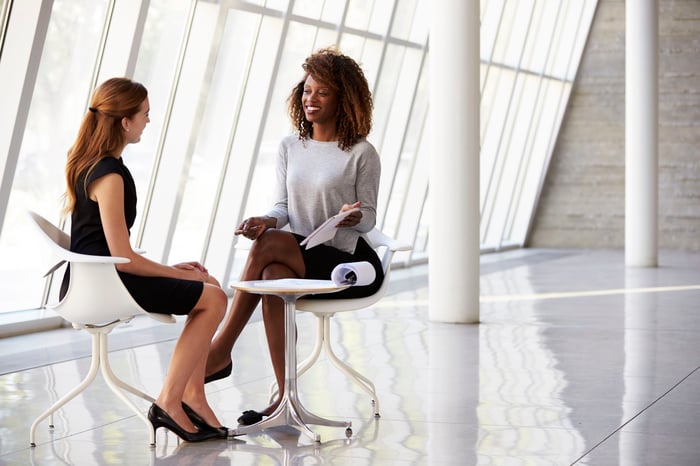 There are a few things you might do that will kill your chances of getting the job. Image source: Getty Images.

Selena Maranjian: One of the worst things you can do at a job interview is to be unprepared. Spending an hour or -- even better -- a day doing some research before the interview can pay off well.

What, exactly, should you look into? Well, consider doing some things you might do if you were researching the company as a possible investment. Start with articles about it in the news, and its own website and press releases. Learn exactly how it makes its money (that's its business model), what businesses it's involved in, and how it's structured. You might then move on to a deeper dive. Depending on the kind of company it is, you could approach workers and possibly customers, asking what's good and bad about the company, and how it might be improved.

Find out how the company is different from its competition. It's smart to get a handle on the company's culture, too, perhaps by asking employees. Doing so can not only help you look more familiar with the company during an interview, but it can also help you determine whether you want to work in such a culture.

Factor in the kind of job you're applying for, too. If it's a marketing job, for example, be prepared to discuss what you've learned or observed about the company's marketing efforts. If the job involves strategic thinking about the business, it can be good to seem savvy regarding competitors and their strengths and weaknesses.

Being prepared will not only impress those doing the hiring, but it can also put you more at ease, because you won't feel like you're winging it when you answer various questions. You'll instead be basing your answers on knowledge about the company and its industry. And when you're asked if you have any questions, you will have had a chance to come up with some good ones.

Maurie Backman: Of all the things not to do during a job interview, showing up unkempt and dirty is probably the worst offense I've ever witnessed. Back when I worked at a marketing company, we had a candidate arrive for an interview looking like he'd just gotten back from a multiweek wilderness trek and hadn't yet had time to stop at home and clean up. His hair was messy, his khakis were dirty, and rather than slip on a pair of business-looking shoes, he opted to show up wearing mismatched socks and Birkenstock sandals (an interesting fashion choice, to say the least).

Not only did this candidate make no effort to dress professionally, but it was obvious from the second he walked into the room that he'd neglected to shower for multiple days straight. Ironically enough, he seemed like an otherwise intelligent applicant, and he shared many good ideas during our interview. But I just couldn't get over his blatant disregard for proper attire and hygiene, and ultimately voted not to bring him back in for a followup, as did the rest of my team.

If there's one takeaway here, it's that it always pays to look professional when going on an interview. Even if the folks you're meeting with are all in jeans and flannels, you're expected to show up looking like you mean business.

Don't be your own worst enemy

Daniel B. Kline: In many ways, a job interview is like a first date. It's always a bad idea to spend your initial meeting with a new person discussing what went wrong in your past relationships. The same is true on a job interview, except that the interviewer may well try to get you to bring up the sordid details.

Questions like "Why are you looking for a new job?" or "How come you are on the market?" open the door to you burying yourself. You have to tell the truth, but you do have the ability to shade it to benefit you.

For example, if you left your last job so you could spend the summer hanging out with your friends, that's an honest answer, but one that will not sell you to the interviewer. You could instead say you felt you had reached your ceiling at your last job, and wanted to be free to pursue new opportunities.

In addition, you should frame any lack of abilities in a positive way. If, for example, the employer wants you to have a basic understanding of a piece of software you don't know at all, you can't hide your lack of knowledge. What you can do is present it in a positive light by expressing eagerness to learn the skill on your own time.

Job interviews are largely about perception and presentation. Be upbeat and make it clear that any past weaknesses or mistakes are learning opportunities. If there's something truly bad in your past that you have to address, don't just explain what happened. Tell the interviewer what you learned, and how you are correcting your course going forward.