For many people, working from home represents the ultimate dream.

An at-home job means no more commuting, no more traffic, and in many cases, the ability to wear your pajamas to work, if that's what you want to do. Of course, there are downsides to having an at-home job, and working from home requires discipline, but the advantages can be big.

Technology has made working from home easier, and a number of major companies have begun hiring remote workers. In fact, as of 2015, stats from the Bureau of Labor Statistics (BLS), show that nearly a quarter of all U.S. jobs (24%) involve working at least some of the time from home. The availability of at-home jobs can vary greatly by state, but the following three fields have become in-demand fields looking for remote workers. 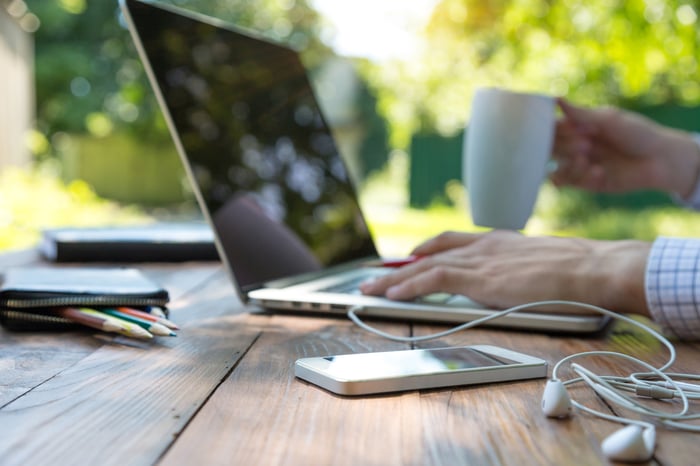 Working from home is a dream for many people. Image source: Getty Images.

For many years, companies sent their customer service operations overseas. In recent years, that trend has reversed with a number of big brands bringing their call centers back to the United States and in some cases using remote workers.

Amazon has become one of the leaders in telework by adding what it calls "virtual (or "work-from-home") positions in some states. These include permanent and seasonal positions, and the company shows over 200 openings on its hiring page at the time this was written as part of a plan to add 5,000 additional remote eworkers in 2017.

Amazon's customer service jobs vary in pay based on skill level required, but basic customer service positions start at $10 an hour. The company notes that during busy times, specifically the holiday season, overtime can be mandatory, and workers may work as many as 60 hours.

The online retail leader is not the only company hiring virtual customer service people. Demand for at-home workers in this space increases particularly during the holiday season, and higher hourly rates can be found in a field requiring specific expertise (such as software support).

As a work-from-home journalist writing this while sitting on my couch wearing the clothes I slept in, I can vouch for an explosion of remote journalism positions. In the past, most at-home writers were either freelancers, cobbling together a living from multiple employers, or high-level writers who could command top dollars for assignments.

In the current market, a new class of jobs has emerged. There are numerous companies, generally online-only media outlets, hiring staff journalists on a work-from-home basis. Job site Indeed.com shows work-from-home positions at websites including INC. Research, which has 22,000 employees, as well as smaller websites like Bustle, a female-focused site. In addition, a number of financial sites like NerdWallet (and The Motley Fool) mix in-house staff with work-from-home writers.

Unlike the freelance jobs of the past, some of these positions offer salaries, benefits, and the other perks of being employed -- all without having to go into a physical newsroom. In fact, media (along with arts, design, entertainment, and sports) is the field where telecommuting is the third-most likely, according to FlexJobs. Moreover, media workers are two times more likely to work from home than those in other professions.

The demand for people who can code has become so intense that in many cases the programmer/developer holds all the cards. That may not be the case at absolute top-tier tech companies, but in general, there are more available coding/developer/programmers jobs available than there are people to fill them.

"As computer technology becomes more pervasive in our society and companies spend increasing amounts of capital for information technology, the demand for high-skilled computer labor skyrockets," wrote a group of Stanford researchers in their paper "The Programmer Shortage." "The current supply of these essential employees is not capable of meeting the high demand."

If you don't have the needed skills, it's actually possible to get them relatively quickly. There are code boot camps, which are short-term programs designed to teach basic skills, as well as higher-end programs turn experienced amateur programmers into top-level developers.

Programming jobs can run the gamut when it comes to salary. People doing basic front-end coding like HTML and CSS may make hourly wages or more modest salaries. Skilled back-end developer can not only earn six figure salaries -- in many cases, they can also command significant perks.

Programming is also a field where many who make big money don't have degrees. In most cases, if you can pass a test or prove you can write the code, it won't matter if you went to school or what your previous work experience is.

While work-from-home jobs have become more available, it's important to remember that there are positives and negatives to taking one. Not having to commute saves money and frees up time, but working from home can be lonely.

It's great to have the flexibility to work wherever you are, and the prospect of not sitting in rush hour traffic is enticing, but working from home requires discipline to actually get your job done. Home can be full of distractions in ways that an office is not, making it harder for some people to get the job done. Before taking a telecommuting job, it's important to consider whether you have the personality to actually perform it well.

The $16,122 Social Security bonus most retirees completely overlook
If you're like most Americans, you're a few years (or more) behind on your retirement savings. But a handful of little-known "Social Security secrets" could help ensure a boost in your retirement income. For example: one easy trick could pay you as much as $16,122 more... each year! Once you learn how to maximize your Social Security benefits, we think you could retire confidently with the peace of mind we're all after. Simply click here to discover how to learn more about these strategies.