Please ensure Javascript is enabled for purposes of website accessibility
Log In Help Join The Motley Fool
Free Article Join Over 1 Million Premium Members And Get More In-Depth Stock Guidance and Research
By Daniel B. Kline - Dec 9, 2017 at 7:03AM

A peak hiring season is coming up, and it's time to get ready.

If you plan on looking for a job in the new year, it's time to start getting your materials ready. That includes getting your resume ready, which means more than simply finding the file on your computer and adding a bullet for your current job.

Resume styles and formats change, and vary by industry. What made for a great resume a few years ago may now break all sorts of rules.

It's important that before you begin your search you make sure you have your resume ready to go. In some cases that could even mean having more than one version of your resume, since different industries sometimes use very different formats. 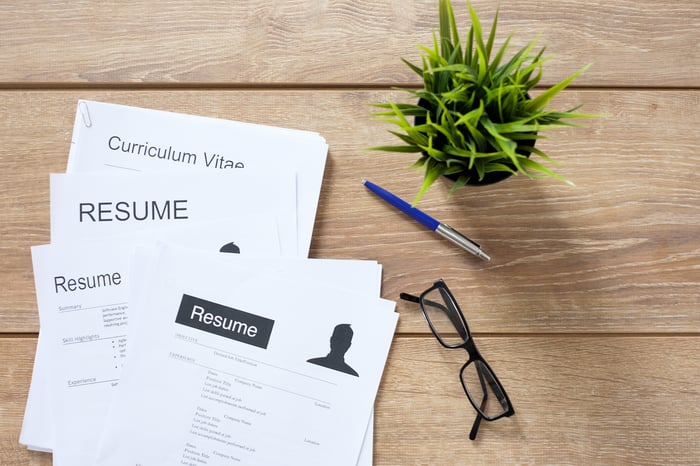 Your resume is often the difference between getting an interview and being ignored. Image source: Getty Images.

1. Make sure the format is current

For the first 15 years or so of my career journalists used a one-page resume. Having anything else was considered arrogant unless you truly had stupendous credentials.

At some point, however, that changed, and it became not only acceptable to have a multi-page resume but the normal practice. I likely missed out on jobs because I never checked this, and when I finally hired someone with experience to help revamp my resume I was actually pretty surprised when she had me lengthen it to multiple pages.

Once that happened, I actually started getting more interviews. Standards vary by industry and change, so check with people who work and preferably hire in the profession you're applying for jobs in.

In 2000 I edited a daily newspaper. At the time the photographers still shot pictures on film that they developed in a dark room, and most of my reporters did not have laptops. The ones who did often filed stories via dial-up modem.

That job may be worth a footnote under my more-recent daily newspaper editing experience, but it's simply no longer current. Unless an older job shows off a certain skill that otherwise is not evident, it's generally best to keep your resume to the past decade or so.

There are, of course, exceptions. If you have held three or four jobs over a longer period that show progressive increases in responsibility, it sometimes makes sense to include them. But unless you're just starting out, your high school and college jobs can most certainly go.

3. Remove skills that everyone has

At various points in my career, I have been the person doing the hiring. It has always troubled when people put skills that any person applying should clearly have on their resume. For example, in 2017 I assume you know how to use Word, Excel, and PowerPoint, at least on a basic level. I'm also pretty sure that you should be web-savvy and understand how the popular social media sites work.

Telling the hiring manager you have these skills that you should have by default wastes everyone's time. The exception is if the ad asks for those skills. When that happens, it's OK to point out that you have them, but even then you should make an effort to show you know more than the basics.

4. Make sure the focus is correct

Don't think of your resume as a list of past responsibilities. Hiring managers can probably figure out that as vice president of marketing you supervised the marketing department. Instead, build your resume around achievements.

"As vice president of marketing, I successfully led an overhaul of the company's branding, which resulted in a 20% increase in partnerships as well as 12% rise in revenue" presents an accomplishment. Instead of merely showing that you held a job, it details what you did while you held it.

As you get your resume in shape, remember that typos and bad grammar can sink an otherwise intriguing job candidate. Have an experienced copy editor check your resume every time you make changes and give your work a final check yourself before you send it out.

It's also important to remember that a resume does not have to be a rigid document. Have a base version and make tweaks as needed based on each job you apply for.