Please ensure Javascript is enabled for purposes of website accessibility
Log In Help Join The Motley Fool
Free Article
Join Nearly 1 Million Premium Members And Get More In-Depth Stock Guidance and Research
By Daniel B. Kline – Aug 27, 2018 at 7:43AM

It can, but you have to play your cards right.

The job market has gotten very strong in a number of industries. That's good for job seekers and people at companies that have taken the initiative to raise wages.

For many workers, however, an improved market doesn't mean much. If your boss doesn't volunteer a raise and you don't quit for a higher-paying position, then the strong economy doesn't really benefit you.

It's possible, however, to appropriately take advantage of the situation and increase your wages. To do so, however, you have to consider your situation and what you're willing to do in order to get better pay. Because every person has different needs, wants, and risk tolerances, not every one of these methods will apply. 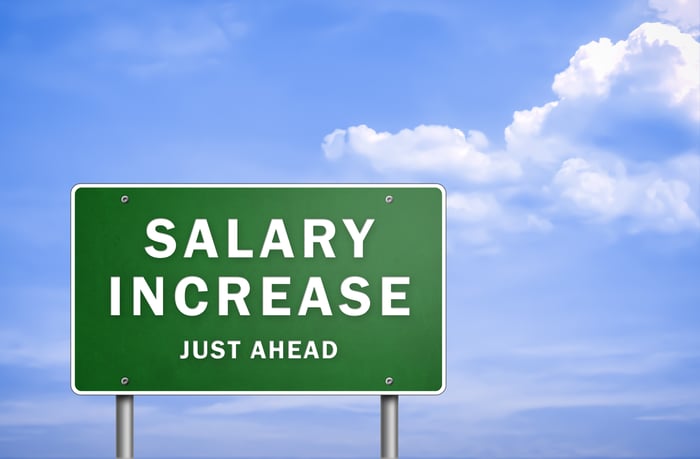 If you deserve to make more money, be prepared to present your case. Image source: Getty Images.

It sounds silly, but if you don't speak up, your boss likely will assume that everything is great. Don't just set up a meeting and ask for more money. Arrange an appointment and lay out a case for yourself.

List your accomplishments and why you should be paid more. It's fine to mention that wages have gone up across your industry, but that should only be a small piece of your argument.

2. Don't take no for an answer

If your boss tells you he or she believes your work doesn't merit a raise, don't let that stand. Ask for specific areas for improvement and for regular progress meetings.

In the case where you're told "there's no money in the budget," ask for a promised raise to be worked into the next budget. If your boss agrees, try to get a specific amount negotiated or the promise of a meeting before budget season.

Look for a job with the idea that your preference would be to stay, but that you're willing to leave. You may surprise yourself and find a much better situation. It's also possible you'll get a better offer that you can bring back to your current employer.

This isn't a well to go to often, and it's not one to undertake without considering the consequences. If you use this tactic, you may find that your employer doesn't want you at a higher price -- or that nobody is willing to pay you one.

In my first job, I went from a low-level part-time assistant to managing editor of a magazine in one move. As you might imagine, I was paid way less than the previous managing editor. Even though I received nice raises on a percentage basis, I still made much less than other comparable editors.

Since my boss wasn't going to give me a $20,000 raise, my only real option was to leave. When I did, I got somewhere near market value because to the new company, I wasn't a young kid who got a big job he may not have deserved. I was an experienced editor with a lot to offer.

Be your own advocate

It's important to understand your worth and take an active role in managing your career. That doesn't mean you have to job hop or eke out every nickel possible. Instead, find a company that values you and pays you a fair wage so that you can be professionally satisfied.