The average American puts in 34.5 hours in the office each week. That's a lot of time interacting with colleagues, making work friends, and sometimes forming intense bonds.

In some fields, a 34.5-hour week seems like a vacation. But no matter how much you work, it's natural to form workplace friendships. That's why just over half of women (50.2%) and 44.4% of men surveyed said they have had a work spouse.

What's a work spouse? It's a "colleague you have a strong friendship with, who is the gender you're attracted to, and with whom you have a bond that resembles that of a married couple," according to the job search engine Simply Hired, which surveyed 1,001 full-time employees on the subject.

Is having a work spouse a bad thing?

A work spouse, when it's a positive relationship, tends to be a stress reliever. It's a person you're close to, with whom you can discuss work problems, colleagues, and personal issues. Where it can become a problem is when the conversation veers into the personal and the relationship crosses boundaries.

That's a line that's different for each person. If your actual spouse knows about the work spouse and that you discuss your marital issues as friends, well, that may be OK; if the relationship is more of a secret, then it might be an issue.

"In that same vein, men were also more likely to fudge the truth about their relationship with their work spouse," according to Simply Hired. "So what might they be hiding? In some extreme cases, work spouse relationships can lead to full-blown emotional affairs, a transgression considered to be even worse than physical cheating by some."

The problem is that while these relationships may never cross a line, in the majority of cases there's an underlying attraction. Most men (84.4%) are at least moderately attracted to their work spouse, while 61.9% of women feel that way. 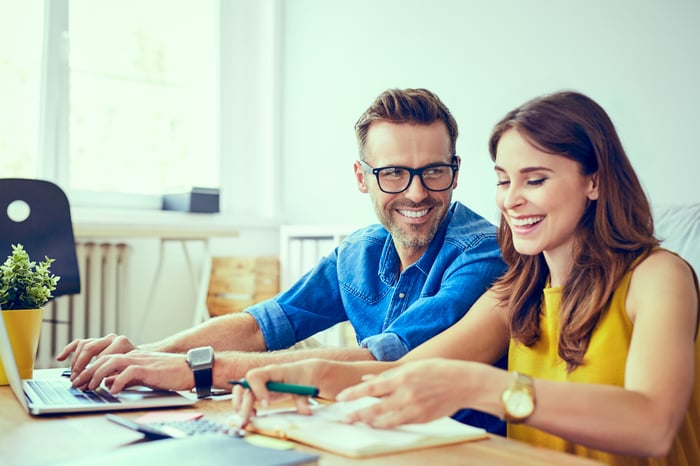 A work spouse can be a good thing if you respect boundaries. Image source: Getty Images.

It's a slippery slope

Having close work relationships isn't a bad thing. It's also not inappropriate to have an attraction to someone other than your spouse as long as you handle it correctly.

That means -- at the very minimum -- that your real-life partner has to know about your work partner. And, whether there's an attraction or not (and the numbers suggest there might be), you have to consider every action.

If you would be uncomfortable with your partner seeing a communication or hearing a conversation with your work spouse, then you have probably crossed a line. It's important to communicate well at home so you're not hiding anything from your partner.

Individual couples have their own rules for how they handle relationships. It's very important to be open and honest with your partner about any work friendships.

"Given how much time we spend at the office, having a colleague who is close enough to be considered a work spouse can actually add a lot of value to the at-work experience," according to Simply Hired. "Forging positive relationships with co-workers, as long as they stay within policy-respecting (and existing-relationship-friendly) boundaries is essential to keeping things drama-free both at work and home."

Basically, a work spouse can be a strong positive. You just need to make sure you're following the rules of your office -- and of your relationship with your non-work spouse.