How we were raised to view money plays a role in how we talk and think about money.

What I'm about to relate is a story I suspect many of you have experienced at least once if you're in a relationship.

My wife mentioned that her friend had recently redone her kitchen. As she explained all of the renovations, I started doing mental arithmetic that quickly added up to big dollars, dollars we couldn't afford. Instead of engaging in a fun conversation about why my wife liked the kitchen and what she thought was cool about it, I responded with my typical "We can't afford that."

Of course, when she heard my response, my wife gave me a confused look and said, "What are you talking about?"

Clearly, after 15 years of marriage, I haven't fully learned the lesson that just because my wife is talking about a new kitchen, she's not implying that she wants to remodel her kitchen. She was only discussing something of interest to her and what she thought might be of interest to me.

So why did I make the leap and start to feel tension in my shoulders? After all, my wife is no stranger to money. Her undergraduate degree is in finance, and she served as the chief financial officer of a small development company. More recently she's taken over as our family CFO, which leads me to wonder why I'm assuming she's talking about money when in reality she's just talking about life. 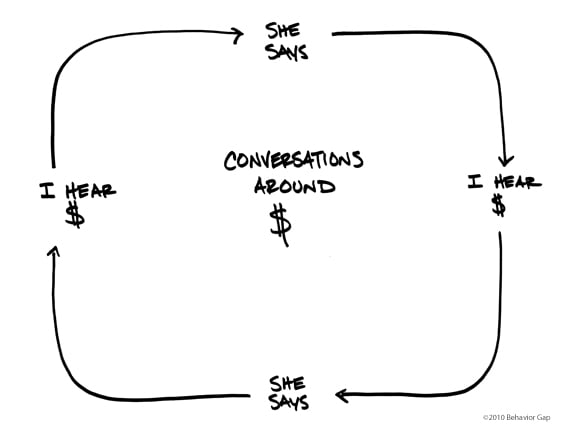 This conversation isn't the first time that I've made the leap to money based on things my wife tells me. For example, every time she mentioned someone she knew that was planning a family trip to Hawaii, I immediately started calculating how much such a trip would cost. Even something as simple as talking about where friends plan to send their children to college makes me start thinking about money.

The reality is that my brain is wired to think differently when it comes to money. Based on my experience, and the stories others have related, it's clear that men and women can have completely different approaches to how they talk about money. What I took as code for "I want a new kitchen" was just my wife talking about something she enjoyed. How many times has this happened between you and your spouse?

Even if it happens a lot, this is not a question of who's right and who's wrong. Rather, it's an opportunity for us to recognize that when we're dealing with people whom we care about, we can't impose our money language and expectations on them.

I will probably continue to do mental arithmetic when I'm chatting with my wife, but if I remember that 99% of the time she's simply talking about subjects that interest her, I can reduce my anxiety over money. How we were raised to view money (let alone all the other influences of gender, experience, and education) plays a role in how we talk and think about money. So it's healthy to recognize that we all bring baggage to these conversations. Hopefully it won't take me another 15 years to put it into practice.