Please ensure Javascript is enabled for purposes of website accessibility
Log In Help Join The Motley Fool
Free Article Join Over 1 Million Premium Members And Get More In-Depth Stock Guidance and Research
By Matthew DiLallo - May 25, 2016 at 12:33PM

Drilling down into two top independent oil and gas companies.

With oil surging in recent weeks, investors are starting to pile back into oil stocks. That said, while most oil stocks move somewhat in tandem with the price of crude, not all oil stocks are the same. Some offer a lot more upside than others without all that much more risk. That's certainly the case when comparing two of the larger independents: Apache (APA 1.29%) and Devon Energy (DVN 0.00%). When we drill down a bit deeper into the two companies a clear winner emerges.

If there's one thing investors learned during the downturn it is the importance of having a strong balance sheet. Here's how these two stack up:

As that chart shows, it's a very close race. However, Apache does score more points for having a slightly better credit rating and less debt both on an absolute basis and as a percentage of its enterprise value. That gives it the advantage over the fact that Devon Energy has a bit more cash on hand.

Drilling down into the portfolios

Over the past couple of years, both Devon Energy and Apache have overhauled their portfolios to put the bulk of their focus on North American unconventionals. However, neither is overly focused on one area, as we can see in the chart below:

There are three key points I want to highlight from the above chart. First, Devon Energy's production is 43% higher on a barrel of oil equivalent basis, which is worth noting given that both companies have roughly the same enterprise value. In a sense, investors are paying a premium for Apache's production in part because 51% of its production is oil compared to just 41% at Devon. Second, while both companies have strong geographic diversification, Devon Energy is more diversified within North American onshore plays, while Apache has greater global diversification. Finally, while neither company grew production last year on an absolute basis after asset sales and under-investment kept production flat at both companies, Devon delivered strong growth in most of its key shale plays.

While both portfolios are strong, there are some key differences worth noting. First, Apache gets more than 20% of its production from Egypt, which might add to its geographic diversification, but it also adds a lot of geopolitical risk. Meanwhile, Devon Energy has much more diversification within North American shale plays, which provides it a lot of upside and optionality as oil prices increase, because shale is much shorter cycle. As such, I'd rate Devon Energy's portfolio as the stronger of the two.

Despite being a smaller company as measured by production, Apache's enterprise value is nearly identical to Devon Energy. There are a few reasons for this. As I've already mentioned, its balance sheet is a bit stronger, and it produces more oil on a percentage basis, which has helped buoy its stock price. However, the main thing fueling Apache's stock in recent months is rumors that it's a prime takeover candidate.

In fact, a few months ago, Anadarko Petroleum (APC) approached Apache on a potential merger but then quickly backed away. Even more recently, there was a rumor that Occidental Petroleum (OXY 2.65%) was considering it as a potential merger partner, but that rumor has been subsequently denied. However, despite the lack of a deal, investors have been buying into these rumors, which is why its stock has vastly outperformed Devon Energy's this year: 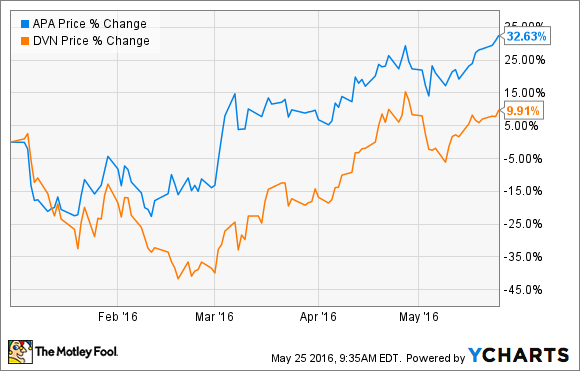 Because there is already a takeover premium baked into the stock price, Apache doesn't have the upside potential  Devon Energy possesses. In fact, the Occidental Petroleum deal was rumored to be in the $25 billion range, which doesn't leave much upside considering that Apache's current market value is already $22.5 billion. Devon Energy, on the other hand, could be valued substantially higher than its current stock price because its production is higher, and it has enormous upside to North American shale plays as the oil price increase. As such, it's clearly the winner, here.

While both companies have solid balance sheets and strong portfolios, Devon Energy is the better buy because of its overall upside. Not only does its stock not have a takeover premium already baked in, but its North American shale focus and diversification could fuel a lot of growth as  oil prices head higher.