Please ensure Javascript is enabled for purposes of website accessibility
Log In Help Join The Motley Fool
Free Article Join Over 1 Million Premium Members And Get More In-Depth Stock Guidance and Research
By Joe Tenebruso - May 28, 2016 at 11:06AM

Beyond the headline figures, here are some important metrics investors should be focusing on.

After falling nearly 15% by early February, shares of Zoe's Kitchen (ZOES) have rallied sharply year to date after a strong fourth-quarter earnings report. 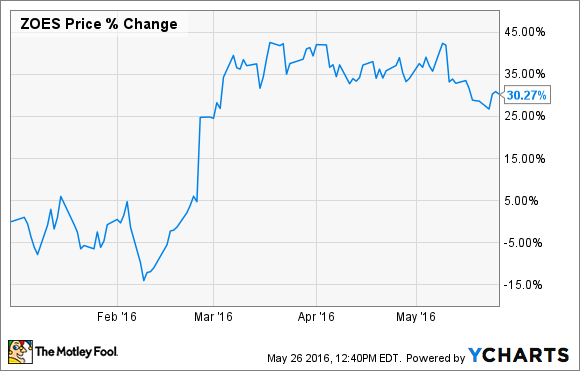 With its stock now 30% higher for 2016, the Mediterranean-inspired restaurant chain has some lofty expectations built into its valuation. Can Zoe's deliver when it reports first-quarter results on May 31? We'll soon find out, and these are the key items investors will be watching.

At this point, an investment in Zoe's is very much a bet on its future growth potential. In its fourth-quarter earnings release, management issued its fiscal 2016 outlook, including total revenue of between $275 million and $280 million, which would represent year-over-year growth of approximately 22% at the midpoint. Much of that sales increase will be driven by new store openings, with Zoe's planning to open 34 to 36 company-owned restaurants in 2016.

But an equally important metric is comparable-restaurant sales, which provides insight into Zoe's competitive positioning within its industry.

Strong comp growth can signal that Zoe's restaurants are taking share within their markets. In addition, as an element in these comp figures, traffic growth can give investors confidence that Zoe's Kitchen is not cannibalizing its existing store base as it opens new restaurants. And if Zoe's is able to raise prices while traffic remains sturdy, that's a sign that it may be able to pass on rising costs to its customers -- something that could help to preserve the company's margins in the years ahead.

In this regard, investors will likely want to see an increase in traffic and overall comp growth of at least 4.5%, which is near the midpoint of Zoe's guidance for full-year comparable-restaurant sales growth of 4% to 5.5%.

One of the benefits of an expanding restaurant count is the ability to leverage costs over a larger revenue base. This would lead to an improvement in profit margins over time. A key measure of profitability for Zoe's Kitchen is what the company refers to as restaurant contribution margin, defined as restaurant sales less restaurant operating costs, as a percentage of restaurant sales.

Restaurant contribution margin increased 130 basis points year over year to 19.8% in the fourth quarter, as lower commodity prices helped results. Zoe's management expects restaurant contribution margin to continue to improve in the quarters ahead, with a full-year goal of between 20.3% and 20.8%. When Zoe's reports its first-quarter results, investors will want to see progress in this regard.

Zoe's Kitchen will release its first-quarter report on Tuesday, May 31 after the U.S. markets close. Investors can tune in to its live earnings call, where management will dig into the numbers at 4:30 p.m. ET. Both the earnings release and a link to the conference call will be available at the company's investor relations website.