Please ensure Javascript is enabled for purposes of website accessibility
Log In Help Join The Motley Fool
Free Article Join Over 1 Million Premium Members And Get More In-Depth Stock Guidance and Research
By Steve Heller - May 31, 2016 at 10:00AM

Are these billionaires onto something? Is 3D Systems a buy?

Each quarter, investors with over $100 million in assets must publicly disclose their investments to the SEC within 45 days of the quarter's end. While it's never advisable to blindly follow what a billionaire buys or sells, it's often interesting to see what some of the brightest minds on Wall Street are doing.

During the first quarter, two prominent hedge fund billionaires -- Ken Griffin and David E. Shaw -- whose multi-billion dollar funds Citadel Advisors and D.E. Shaw & Company -- increased their stakes in 3D Systems (DDD -1.44%) by a total of 1.1 million shares. Although this total purchase is small potatoes compared to Griffin's and Shaw's total investible assets, it's noteworthy that each fund significantly increased their position since the fourth quarter.

Are these billionaires onto something? Is 3D Systems a buy?

Since its peak in early 2014, 3D Systems' stock is sharply lower: 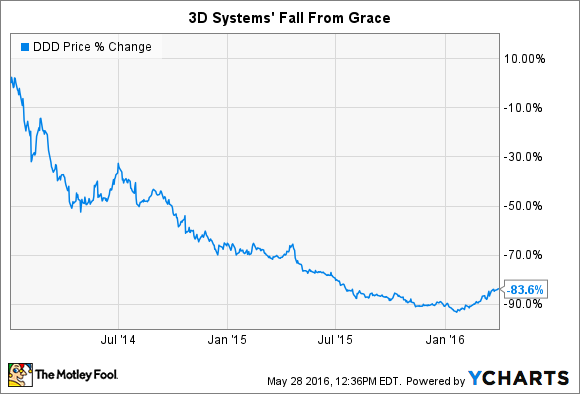 Now that Reichental has been replaced with Vyomesh Joshi, a retired HP (HPQ 1.18%) printing executive who was considered instrumental in doubling the operating profits of HP's $26 billion printing business during an 11-year period, 3D Systems appears poised to regain its focus and deliver improved operating performance.

Although Joshi has only been on the job for a couple of months, his first order of business will be focused on "... improving quality, reliability and supply chain. The next phase for us is to develop a strategy to drive profitable growth with operational excellence and an appropriate cost structure." In other words, investors buying 3D Systems today would have to believe that Joshi is capable of delivering on these promises in a reasonable amount of time.

On a high level, there are three main reasons to avoid 3D Systems' stock:

1. Operational challenges. Despite optimism surrounding Joshi's ability to improve 3D Systems' operations, the company faces major challenges. In the last five years, 3D Systems' cash conversion cycle, which measures in days how quickly cash goes through the sales process, from sitting in the bank, to buying inventory, selling inventory, and collecting payment, has nearly tripled. This suggests that the company isn't efficiently using cash and could be providing looser credit terms to customers to drive sales. 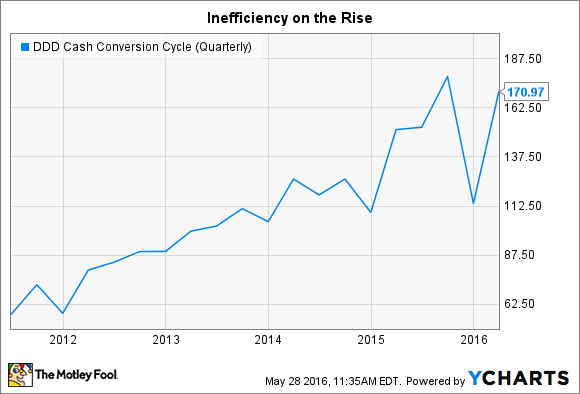 2. Customer weakness. Over the last five quarters, 3D Systems experienced a notable slowdown in customer spending from large industrial and professional customers. Whether it's due to an oversupply of 3D printing capacity in the marketplace, general industrial sluggishness, falling oil prices, the strong dollar, or increasing competition, there are too many factors to clearly assess when customer demand will improve. Ultimately, without healthy customer demand, 3D Systems' growth prospects are less attractive.

3. Increasing competition. In the coming years, 3D Systems faces new competition from several notable entrants, armed with 3D printing technologies that could make 3D Systems' portfolio appear inferior. This list includes Carbon's recently released M1 printer that's 25-times to 100-times faster than anything before it, and HP's upcoming Multi Jet Fusion 3D printer that promises to be 10-times faster than leading extrusion-based and material jetting technologies. From a purchasing manager's point of view, the more viable 3D printing options there are, the more difficult it likely becomes for 3D Systems' printers to stand out.

While there are justifiable reasons to consider or avoid 3D Systems' stock, the answer comes down to the individual's risk tolerance and convictions. For those considering 3D Systems, it largely hinges on customer demand improving, Joshi driving better operational performance, and competition that proves to pack more bark than bite. An investor who passes on 3D Systems is likely more inclined to believe there are too many negative factors that could plague its prospects.

Ultimately, until there's greater visibility about which direction 3D Systems is heading, the bulls and bears will battle it out, and short-term bouts of volatility will likely persist.