Please ensure Javascript is enabled for purposes of website accessibility
Log In Help Join The Motley Fool
Free Article Join Over 1 Million Premium Members And Get More In-Depth Stock Guidance and Research
By Daniel B. Kline - May 31, 2016 at 12:35PM

Blame low government efficiency and how America deals with the rest of the world for the drop in this survey.

Donald Trump just got some new ammunition in his battle to say that the American economy has lost its way.

A new World Competitiveness Ranking drops the United States from the top spot, which it has held for the past three years, into third behind China Hong Kong and Switzerland, which jumped from Nos. 2 and 4, respectively, last year, according to the IMD World Competitiveness Center (WCC), a research group within the IMD business school. [China Mainland ranks No. 25 and Hong Kong is a gateway to foreign investment in the Mainland, according to IMD.]

An annual report which has been produced since 1989, the ranking is based on analysis of over 340 criteria derived from four principal factors: economic performance, government efficiency, business efficiency, and infrastructure. In addition, responses from an in-depth survey of more than 5,400 business executives, who are asked to assess the situation in their own countries, are also taken into consideration, according to IMD.

In the four categories ranked for the 61 countries examined, the U.S. remains No. 1 in economic performance and infrastructure, but it scores No. 25 in government efficiency while dropping from No. 2 in business efficiency in 2015 to No. 7 this year.

"A consistent commitment to a favorable business environment was central to China Hong Kong's rise [while] Switzerland's small size and its emphasis on a commitment to quality have allowed it to react quickly to keep its economy on top," said. WCC Director Arturo Bris of the two companies that have passed the U.S. in the rankings. 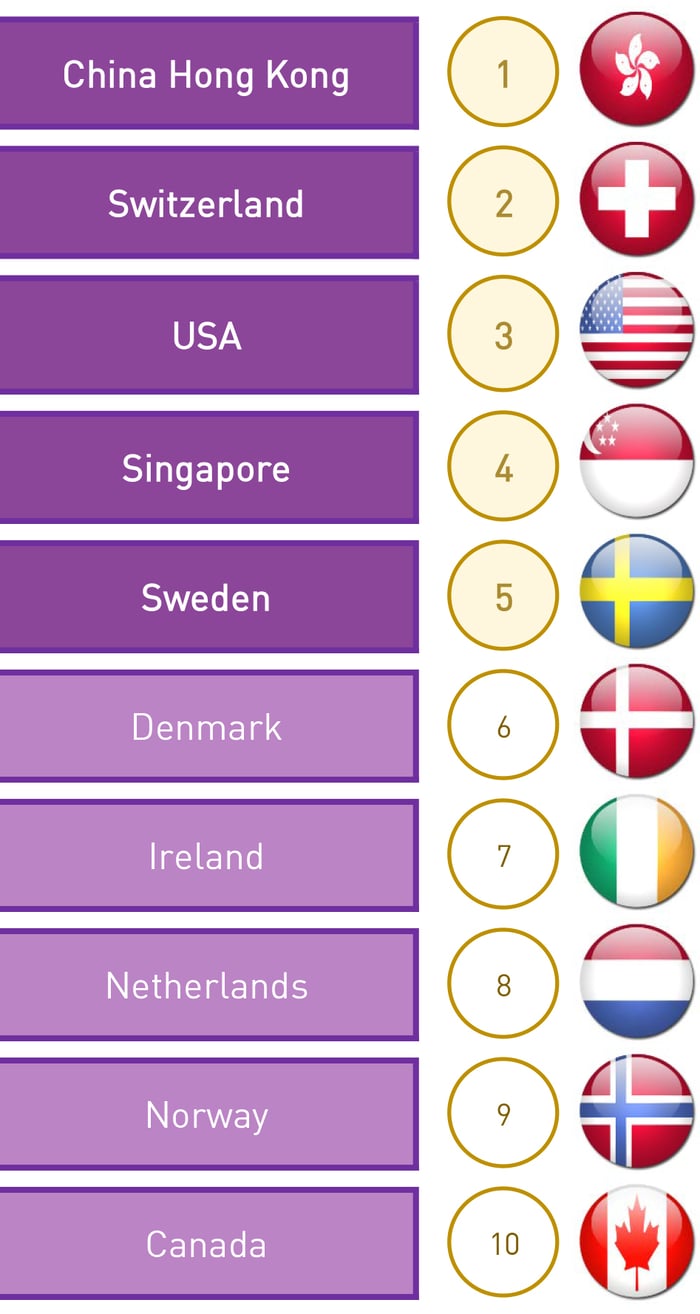 It's not all bad for the United States

"The USA still boasts the best economic performance in the world, but there are many other factors that we take into account when assessing competitiveness," Bris said in a press release. "The common pattern among all of the countries in the top 20 is their focus on business-friendly regulation, physical and intangible infrastructure and inclusive institutions."

In the case of the United States, many of its biggest weaknesses are related to dealing with other countries. The country's lowest scores are coming in No. 60 in "exports of goods percentage" under economic performance, which measures how much of the total goods made in the U.S. are sold as exports;  and ranking No. 35 for "foreign currency reserves per capita" in government efficiency. The U.S. also ranks very poorly in areas that may be a bit surprising including "mobile telephone costs" (No. 56) and "pupils-per-teacher ratio" (No. 45).

Of course, the U.S. also took the top spot in a number of categories including the "number of computers per capita," "total healthcare expenditure," "venture capital," "food costs," and a handful of categories related to investment in stocks.

The rich are getting richer

While the U.S. has lost its top spot in this survey, it remains one of the countries with the most competitive economies and Bris said the data overall show that the rich are getting richer and the poor are getting poorer.

"Since 1995 the world has become increasingly unequal in terms of income differences among countries, although the rate of increase is now slowing," he said. "The wealth of the richest countries has grown every year except for the past two, while the poorer countries have seen some improvement in living conditions since the millennium."

The difference between the U.S. and other countries ranking lower on the list may be that despite the income gap between America's rich and poor, in the United States, a rising tide at least somewhat raises all boats.

"Unfortunately, the problem for many countries is that wealth accumulation by the rich doesn't yield any benefits for the poor in the absence of proper social safety nets," Bris said. "Innovation-driven economic growth in poorer countries improves competitiveness, but it also increases inequality. This is obviously an issue that demands long-term attention."