Please ensure Javascript is enabled for purposes of website accessibility
Log In Help Join The Motley Fool
Free Article Join Over 1 Million Premium Members And Get More In-Depth Stock Guidance and Research
By Matthew DiLallo - May 31, 2016 at 9:45AM

While its credit facility was cut, that cut wasn’t as deep as feared.

After months of speculation, Vanguard Natural Resources (NASDAQ: VNR) finally has an answer to the burning question of how much its banks would cut its credit at its spring borrowing base redetermination. While banks cut deeply into the borrowing bases of the sector, forcing a number of oil and gas producers to file for bankruptcy -- including two of Vanguard's closest upstream MLP peers -- its borrowing base cut wasn't an insurmountable obstacle. That being said, the company still faces an uphill battle given its large debt load and the continued uncertainty surrounding oil and gas prices.

As a result of weaker oil prices, and the recent sale of the company's SCOOP/STACK assets, Vanguard Natural Resources' lenders have revised its borrowing base down to $1.325 billion. That's 26% below its previous credit limit of $1.8 billion. While that's a deep cut, it wasn't as deep as the 30% credit cut experienced by Denbury Resources (DNR), which for example, saw its borrowing base reduced from $1.5 billion to $1.05 billion. Meanwhile, some drillers experienced borrowing base cuts north of 50%, while the credit cuts of others left them no choice but to file for bankruptcy.

What this means for Vanguard Natural Resources going forward

According to the terms of Vanguard's credit facility it has six months to pay back this deficiency, which stands at $103.5 million not including its roughly $40 million cash on hand. That cash gives it a bit of breathing room to start making its six equal monthly installments of $17.3 million, with the first one due at the end of June. Aside from its cash cushion, the company estimates that it will generate enough excess cash flow over the next six months to satisfy this requirement.

However, while the company believes that it can pay back what it owes from this redetermination, it has another one coming up again in six months. As such, if oil and gas prices were to weaken its credit facility could be reduced again, which depending on the reduction, could be an even bigger issue because the company's oil and gas hedges won't be as strong in 2017 as the slide below shows: 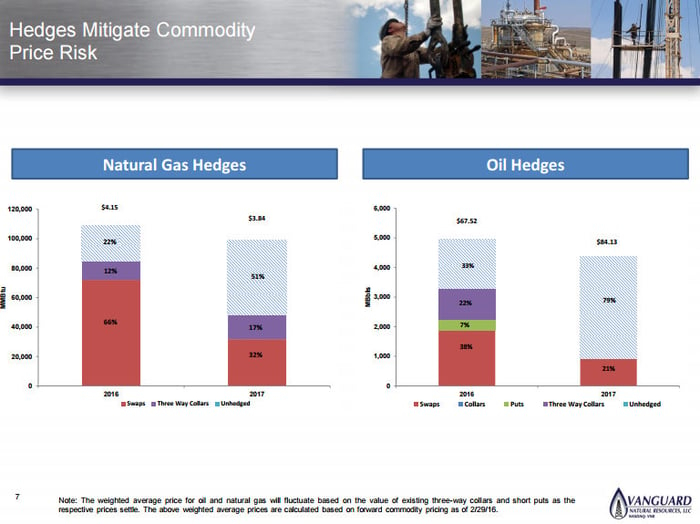 Those weaker hedges are a big concern because it means that the company would generate less excess cash flow next year if commodity prices remain weak, which would make it harder to comply with any deficiency repayment requirements. That could put the company in the same position as many of its upstream MLP peers this redetermination period, which had no choice but to file for bankruptcy after their debt was no longer manageable. It's a risk that remains for Vanguard given the amount of debt it has outstanding amid the currently weak commodity price environment.

Vanguard Natural Resources just barely made it through the spring redetermination period. While its credit facility was cut below what it has borrowed, it believes it can generate enough cash flow to pay back this deficiency on time. That said, this isn't the last we've heard of the company's credit concerns given that it has to go through another redetermination in six months. Needless to say, the company's future is still very much up in the air.