Stocks managed the slightest of gains in their first trading session of June. On Wednesday the Dow Jones Industrial Average (DJINDICES:^DJI) rose by just two points to remain essentially unchanged. The S&P 500 (SNPINDEX:^GSPC) added two points as well, for a 0.1% uptick: 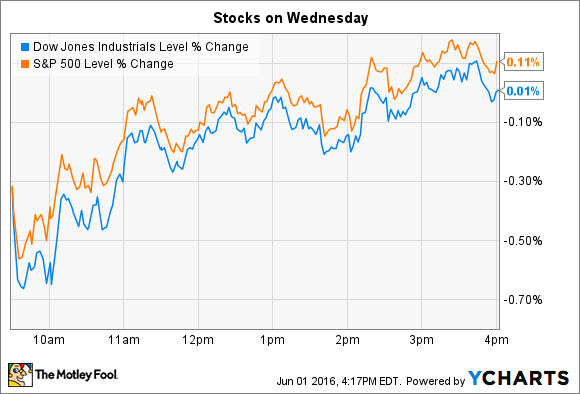 As for individual stocks, Under Armour (NYSE:UAA) and Michael Kors (NYSE:CPRI) each made notable moves on heavy trading volume after announcing important financial news. Here's what drove the unusually large price swings:

Under Armour fell 4% on twice its normal trading volume after the retailer dialed back its 2016 sales growth outlook. Revenue gains are now expected to come in at 24%, or about $4.9 billion, rather than the 26% improvement to $5 billion that it projected in late April.

The downshift is entirely due to the impending bankruptcy of Sports Authority, which is a large wholesale customer of Under Armour's. A recent bankruptcy court ruling has resulted in that retailer's liquidation, which means that Under Armour will not be paid for about $140 million of sales it made to Sports Authority. The apparel giant also loses a fairly large customer going forward, since Sports Authority will no longer be doing businesses. Finally, UA has to take a hefty impairment charge that will pinch profits to the tune of at least $50 million this year.

Under Armour CEO Kevin Plank noted that the loss has no impact on management's focus and is not indicative of a slowing growth profile. "While the Sports Authority's bankruptcy impacts our 2016 outlook, our brand's momentum is stronger than ever as we continue to see growth and increased demand," he said in a Securities and Exchange Commission filing.

It's true that Under Armour's 2016 profit growth will be hurt by this bankruptcy, but the loss does nothing to threaten its expansion into new product categories like footwear and new geographies like China. Instead, the loss of this wholesale customer is a one-time event that will have no influence on the company's long-term growth pace .

Michael Kors was the best-performing stock on the S&P 500, rising 7% after posting surprisingly strong quarterly results. The luxury retailer's comparable-store sales rose by a meager 0.3% in fiscal Q4, but that was still an improvement over the prior quarter's 1% drop. Overall revenue rose 10.9% to $1.2 billion, which was just ahead of consensus estimates.

Gross profit margin slipped to 58% of sales but increased slightly after accounting for foreign currency swings. Altogether, the operations held up better than many investors feared, given the 20% drop in the stock in the month leading into Wednesday's release.

Looking ahead, the retailer isn't expecting strong growth for its new fiscal year. Comps are projected to decline by more than 3% and expenses will spike thanks to its just-completed acquisition of its Chinese licensee. Yet several encouraging initiatives, including a growing e-commerce business, promising men's product lines, and well-received marketing campaign, are giving management increasing confidence that a sturdier long-term rebound is in the cards.

Investments in these areas "will pay meaningful dividends for years to come," CEO John Idol said in a press release, and they've already started to move the needle toward at least minor comps growth. That brightening outlook was enough to send shares of this beaten-down retailer higher, but they remain about 50% below the all-time highs they set two years ago.