It's hard to put a value on an intangible asset like a brand or reputation. Yet we know there's a huge amount of value in these things. That's why it can be a good idea to look for what are often called fallen angels -- stocks with great brands and reputations that, for some reason, fall on hard times. Right now Royal Dutch Shell (NYSE:RDS.B), Nucor Corporation (NYSE:NUE), Eaton Corporation (NYSE:ETN), and Emerson Electric (NYSE:EMR) are all cheap big brand stocks.

There's no question that the oil industry has been struggling ever since oil started a deep price decline in mid-2014. That's taken oil's giants and minnows alike for a rough ride, leaving some of the smaller players mired in the bankruptcy process. A giant like Shell, however, is highly likely to survive this downturn, just as it has every other downturn over the past 100-plus years.

In fact, you could argue that Shell is using this downturn to get better, since it recently completed the acquisition of a natural gas-focused competitor. That fuel looks destined for increased demand as utilities around the world opt for cleaner-burning fuel options. The only problem is that it was an expensive deal made during an industry downturn. Some market watchers believe it will strain the company's finances enough to lead to a dividend cut.

So far, management has stood behind the dividend, but investors don't like uncertainty and Shell's shares have been punished. For example, Shell trades at a little below book value while competitors such as ExxonMobil (NYSE:XOM) trade at more than twice book. In fact, Shell is trading even cheaper than BP (NYSE:BP), the company that brought us the Deepwater Horizon oil spill not too long ago.

But for those willing to take on a little risk, Shell's dividend yield of more than 7.5%, its history of navigating the oil market, and its great brand might be worth a little more research. Exxon's yield, for reference, is less than half of what Shell offers.

The company of steel

To be fair, unless you follow the steel industry you've probably never heard of Nucor. That's a shame, because it's one of the largest, and perhaps best run, U.S. steel mills around. To put some numbers on that claim, Nucor has lost money only once over the past decade, in 2009. That was around when the steel industry's long downturn began, during the deep 2007-to-2009 recession. Competitors such as United States Steel (NYSE:X), a name you've probably heard of, can't boast that kind of success: Iconic U.S. Steel has bled red ink in six of the past 10 years, including four of the past five. 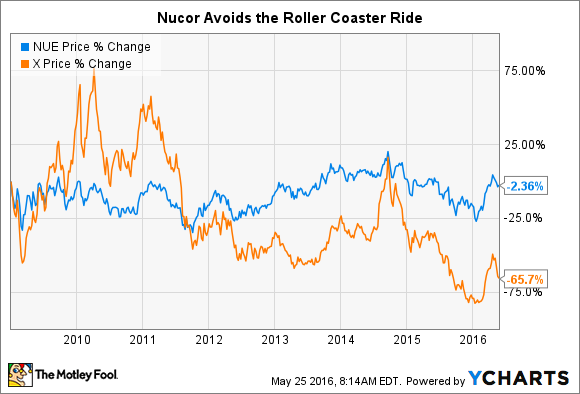 To be fair, weaker competitors are cheaper than Nucor right now. But this is a case where sticking with an out-of-favor industry's best names is a better choice. And there's good reason for that here. For example, Nucor has a focus on more modern electric arc furnaces, which are generally cheaper and more flexible to run. Its employees are compensated in a way that rewards them during the good times but asks them to feel some pain during the lean times, which helps reduce Nucor's costs exactly when it's most advantageous. Nucor also has a history of investing during downturns. This time is no different, so it will come out the other side a stronger company.

Oh, and then there's the little fact that this roughly 3.2% yielder has increased its dividend every year for over 40 years. All steel stocks are pretty cheap today because of the difficult industry environment, which has made Nucor a very compelling investment option for those who like to stick with best-of-breed investments.

Another sector that's feeling some heat today is the industrial space, as global growth isn't as robust as it was just a few years ago, with emerging markets slowing down, agricultural markets weak, the mining industry in the dumps, and China struggling to maintain its heady growth. This environment has hit globally diversified industrials such as Eaton and Emerson pretty hard. 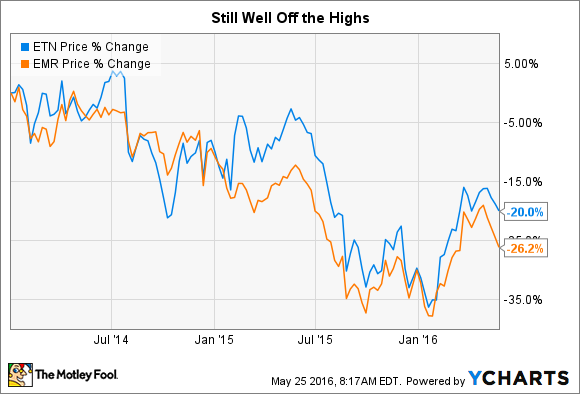 In fact, despite some recent price strength, these two remain well below their recent highs. Honestly, there's good reason for that, since growth is lacking right now. Both Eaton and Emerson expect organic revenue to decline this year. Eaton is calling for organic growth to drop by as much as 4%, and Emerson thinks organic sales could fall up to 5%.

But here's the thing. Eaton expects to earn between $4.15 and $4.45 a share this year, and Emerson is looking for between $2.61 and $2.88 a share in its fiscal 2016. Emerson's numbers, however, include costs associated with spinning off a lagging division. Remove those expenses, and the industrial giant's earnings would increase to between $3.05 and $3.25 a share. The takeaway here is that even during the hard times, this pair is very profitable.

You have great name brands, global businesses, and impressive portfolios, and, last but not least, each one yields around 3.7%, roughly 20% more than their average yield over the past five years. That makes this industrial duo worth a deeper dive if you are looking for cheap big brand stocks.

There are risks associated with any investment decision you make. Shell, Nucor, Eaton, and Emerson are hardly slam-dunk options. But they all have great brand names and are relatively cheap today. If you like the idea of sticking with leaders, you should start doing a deep dive on these companies right now.