To be perfectly clear, I like both of these companies as long-term investments, and I actually own both in my personal portfolio. My goal here is not to determine whether Bank of America (NYSE:BAC) or Goldman Sachs (NYSE:GS) is the better company. Rather, I want to determine which is the best one to buy now. To make this determination, we'll have to look at a few things: valuation, profitability, and risk.

Bank of America and Goldman Sachs today -- the quick version

Bank of America is one of the "big four" U.S. banks, and it had some turbulent years during and after the financial crisis. However, the bank has come a long way since then, with improved asset quality and strong growth in deposits, loans, and book value. In addition to its largest business segment, consumer banking, Bank of America has large wealth management and investment banking businesses, producing a diverse revenue stream.

On the other hand, Goldman Sachs focuses on the investment banking side of the business, where it is an industry leader. During the first quarter, Goldman was No. 1 in announced mergers and acquisitions, as well as equity underwriting. In addition, Goldman has a large investment management business with nearly $1.3 trillion under management. Although it became a "bank holding company" during the financial crisis, Goldman doesn't have much in the way of consumer banking operations, although it did announce plans to start a small-scale lending business.

Commonly used valuation metrics such as the price-to-earnings ratio aren't great for evaluating banks, and especially these banks, since earnings have been so inconsistent. As you can see in the chart below, both banks' P/E ratios have varied tremendously throughout the past year alone and are currently showing completely different valuations. 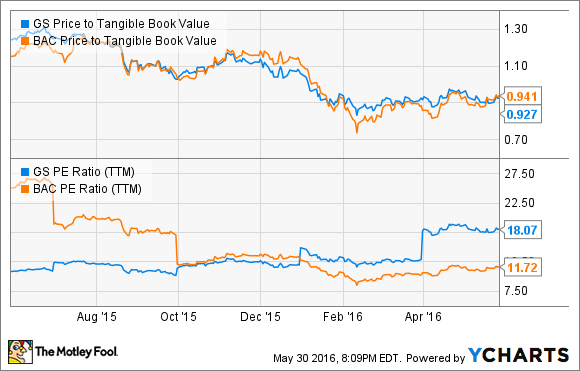 In general, when a stock trades for less than the value of its assets, it's fair to assume there's a reason. In Bank of America's case, one big reason for the low valuation is a lack of profitability. Thanks to the persistent low-interest rate environment and general lack of efficiency, Bank of America isn't as profitable as the market likes banks to be. During the most recent quarter, the bank produced a return on assets (ROA) of just 0.5% and a return on equity (ROE) of just 4%, well short of the industry's benchmarks of 1% and 10%, respectively.

Goldman isn't doing too much better, with a ROE of 6.4% during the first quarter, thanks to weakness in most of its businesses. The weak IPO market, lower M&A activity, poor trading revenue, and poor investment performance more than offset a reduction in expenses and led to the mediocre results. However, in Goldman's case, this seems more like a temporary setback than a lingering problem. As you can see, Goldman's profitability levels have been above the desired industry standards quite a bit in recent years, while this has simply not been the case for Bank of America, which has yet to prove its post-crisis profit potential. 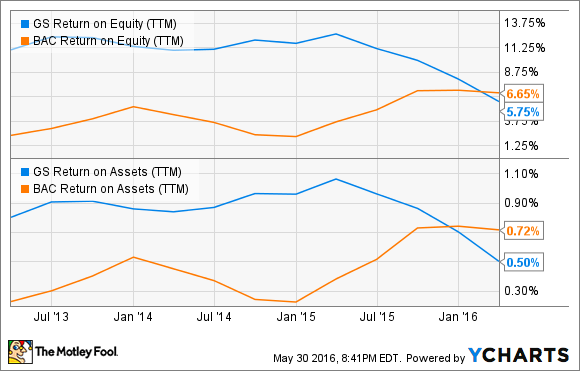 Both banks have substantial risks investors should be aware of, and the most obvious one is that profitability could remain low. If interest rates remain depressed for longer than expected, it could be a lingering drag on profitability. Investment banking is a big part of both banks' business models, and trading revenue has been weak lately, which could also hinder the banks' profits if it continues as such.

Bank of America has substantial exposure to energy lending ($21.3 billion funded, $22.6 billion in unused credit lines), and there is concern that persistently low oil prices could lead to a wave of defaults. In Goldman's case, overall stock market weakness is a risk factor for several reasons. Not only would the stock likely decline with the market, but during weak markets, IPO and M&A activity tends to be low, plus the value of Goldman's assets under management would drop, leading to lower commissions and fee revenue.

This is by no means an exhaustive list of the risks involved with an investment in these banks, but the point is, these are not low-volatility stocks, nor is the road to a higher valuation likely to be an easy one.

There's no question that both of these stocks are on the riskier side, but I believe this is more than made up for by their valuations. And, I happen to like both of these banks at their current prices, even after the recent rebound. If I had to choose just one, I'd pick Bank of America simply because I feel it has more upside as interest rates normalize and profitability approaches respectable levels.