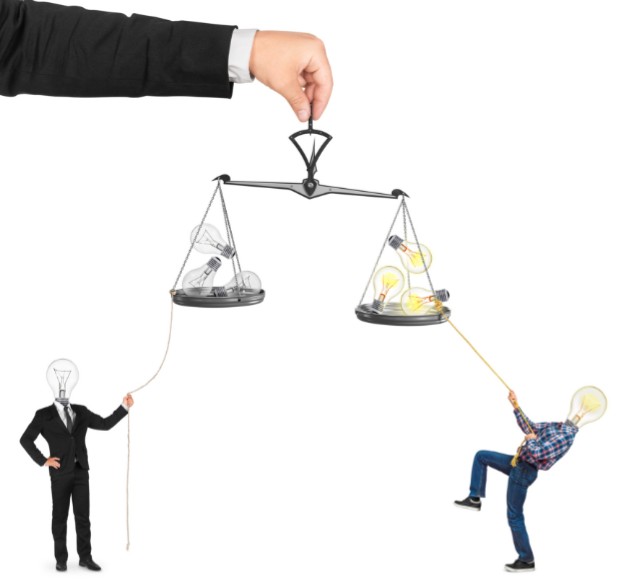 After years of sliding revenue, both Eli Lilly and Company (NYSE:LLY) and Pfizer (NYSE:PFE) are finally seeing their top lines slope upward. Longtime shareholders are pleased by the upswing, and potential investors are beginning to notice.

Whichever camp you're in, however, it's important to look past the top line. Let's dig into these two patent cliff recoverees and see which of these big pharma stocks is a better buy.

First-quarter sales of Lilly's top-selling drug, Humalog, fell 11% compared to the same period last year. Luckily, some new products are picking up the slack, and overall sales improved 5% to $4.9 billion.

While everyone expected Lilly's type 2 diabetes pill, Jardiance, to outshine its weekly injection for the same indication, Trulicity, that hasn't been the case. Despite an outcome study that shows Jardiance reduced type 2 diabetics' risk of death by 32%, Lilly recorded just $38.2 million in first-quarter sales of the drug. To illustrate how dismal that is, Johnson & Johnson's competing drug of the same class, Invokana, racked up $325 million in first-quarter sales, and J&J isn't even a diabetes-focused drugmaker.

Even more surprising is the success of Trulicity: After all, there's no proof that it reduces patients' risk of death -- in fact, its label contains a severe warning of potential thyroid cancer. Despite the warnings and the fact that Trulicity won FDA approval after Jardiance in Q3 of 2014, this year's first-quarter Trulicity sales exploded to $143.6 million from just $18.3 million in Q1 2015.

If Lilly could get Jardiance off the ground, it might enjoy the impressive sales growth Pfizer has exhibited lately. Big pharma's grand acquisitor posted 20% year-over-year sales growth in Q1, although excluding recently added legacy Hospira sales reduces Pfizer's stand-alone revenue growth to "only" 9%.

With a hair over $13 billion in revenue for the first quarter alone, Pfizer can't easily move its sales needle. Luckily, its top product, Lyrica, isn't weighing it down -- at least not yet. Although U.S. sales of the popular pain pill grew by double digits, generic competition in the EU slowed worldwide Q1 Lyrica sales to 4% higher than the same period last year, or about $1.2 billion.

In the U.S., Lyrica's basic product patent expires in 2018 and will probably feel generic pricing pressure shortly after. Luckily, the company's top drug, Prevnar 13, has at least another decade of exclusivity in major markets. First-quarter sales of the vaccine rose 16% to $1.5 billion, and Pfizer has another growth driver headed straight to the top.

Approved just last February, breast cancer treatment Ibrance finished the first quarter on an annualized run rate of $1.7 billion. An expansion in February to a larger patient population will probably push Ibrance sales over the $2 billion mark by the end of the year.

About 1 in 8 U.S. women will develop invasive breast cancer over the course of their lifetime. Pfizer announced that Ibrance met its main goal in a longer outcome study this April, which should position it as part of the standard first-line treatment for a majority of these women in the years ahead. Peak annual sales estimates of $5 billion for this drug are easier to swallow than the 125 mg pills.

April was a terrific month for Pfizer's late-stage pipeline. In addition to Ibrance news, the company reported positive results for its smoking-cessation drug Chantix, and its Remicade biosimilar, Inflectra, became the first of its kind to earn FDA approval. Last year J&J recorded over $6.5 billion in sales of the popular anti-inflammatory, with $4.45 billion from the U.S. alone. Biosimilars are generally priced 20% to 30% lower than their reference products in international markets, so Inflectra could quickly begin contributing more than $1 billion annually to Pfizer's top line. Before you get too excited, there are some things you need to know about biosimilar drugs -- but overall, Pfizer's late-stage pipeline far outshines Lilly's.

The most exciting drug to emerge from Eli Lilly's pipeline recently is Taltz for the treatment of psoriasis. It will be up against Novartis' drug of the same class, Cosentyx, in an already crowded indication. However, with a similar safety profile, a smaller dosage, and a brand name easier for doctors to scribble, Taltz just might reach annual sales north of $1 billion by 2020.

With a yield of 3.5%, Pfizer's dividend is far more enticing than the 2.7% Lilly's shares are offering at recent prices. However, I wouldn't expect too much dividend growth from either big pharma stock in the years ahead. 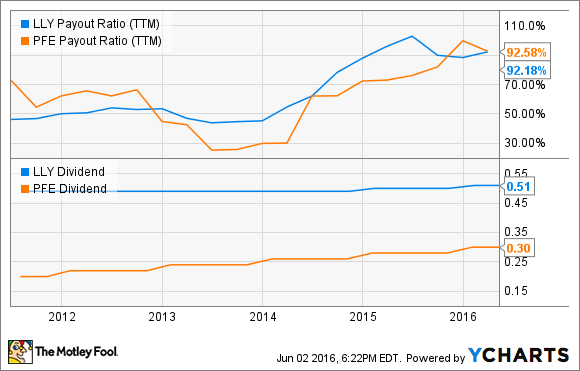 Both are using a frightening 92% of trailing earnings to make their current payments, though for different reasons. Lilly simply hasn't had the earnings growth. Freezing the dividend for several years couldn't even keep the distribution at a sustainable level. Pfizer, on the other hand, has increased payments for six consecutive years.

Lilly stock is trading at a steep premium. At almost 35 times trailing earnings and 28.5 times this year's earnings estimates, it's far pricier than Pfizer. 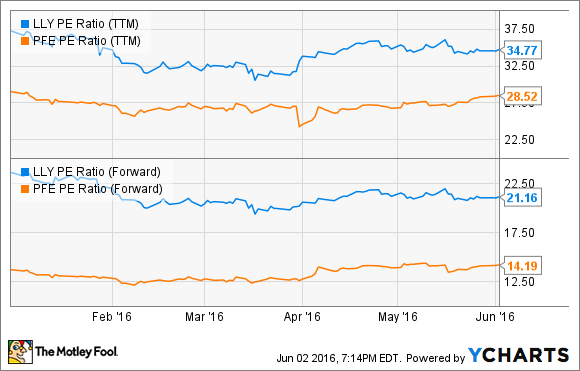 Lilly blames a $203.9 million charge related to Venezuela's financial meltdown for first-quarter profits of $440.1 million coming in 17% below the same period last year despite a 5% gain in revenue. A charge that size would certainly inflate a trailing earnings multiple, along with the forward multiple based on this year's estimates.

Even without the charge, I think the shares are awfully expensive for a company without much to look forward to. Scored on products, pipelines, dividends, and value, Eli Lilly is zero for four. This makes Pfizer the better buy, without question.