What: Latin American airline Copa Holdings (NYSE:CPA) has had an up-and-down start to 2016. While Copa stock had soared in February and March, the shares slumped 18% in May, according to data from S&P Global Market Intelligence. 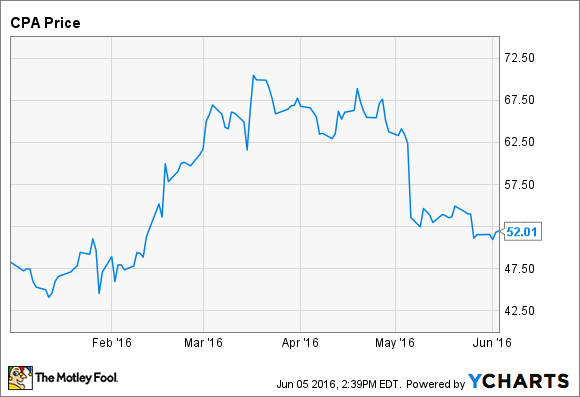 So what: The most recent setback for Copa shares came after the company reported its Q1 earnings a month ago. Adjusted net income fell more than 30% year over year.

Copa is suffering from economic weakness in many of its markets. Revenue per available seat mile declined 13.9% year over year in dollar terms. The company mentioned Brazil, Venezuela, and Colombia as being particularly weak during Q1.

The strong dollar is compounding Copa's problems, as many of its expenses are dollar denominated (e.g. fuel, aircraft rent, and spare parts) but most of its revenue comes in other currencies. The tailwind from falling fuel prices is also dissipating quickly.

Because of these issues, Copa cut its full-year unit revenue guidance and raised its fuel cost guidance. These negative shifts outweighed an improvement in its non-fuel unit cost outlook. As a result, Copa now expects its full-year operating margin to decline to 9%-11% from 11.8% last year. It had previously forecast that its operating margin would stay roughly flat at 11%-13% for 2016.

Now what: While Copa's bottom line is starting to come under pressure, the airline is still solidly profitable. That said, the airline business is quite risky under the best of circumstances, and Copa's exposure to exchange rate fluctuations makes it even riskier for investors.

On the bright side, air travel in Latin America is likely to grow significantly in the long run. Copa has a relatively competitive cost structure, and the favorable geography of its Panama hub as a connection point between North America and South America should allow it to capitalize on this market growth. This could allow Copa stock to bounce back, eventually.