What: Papa John's International, Inc.'s (NASDAQ:PZZA) stock rose 10% in May, according to data provided by S&P Global Market Intelligence. 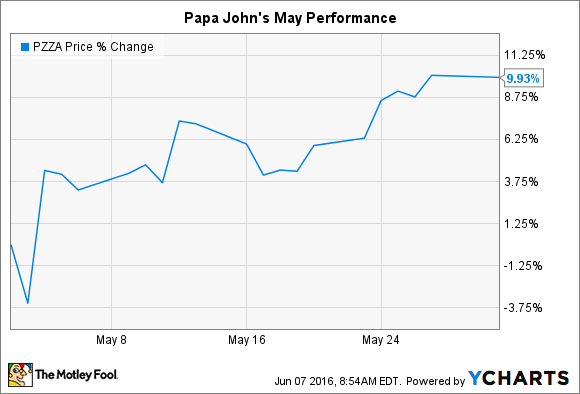 So what: Investors cheered Papa John's first-quarter report that showed a 14% rise in net income that translated into 26% higher earnings per share after accounting for a shrinking share count. The pizza chain benefited from lower costs on ingredients like meat and dough in addition to a 2% improvement in comparable-store sales. "We're pleased to have delivered another solid quarter, with excellent profitability growth in spite of a competitive promotional environment," founder and CEO John Schnatter said in a press release.

That profit result trounced Domino's, which posted a slight profit decrease in Q1. However, Domino's continued to beat Papa John's in the critical comps metric: Its comps were up a scorching 12%, on top of the prior-year period's 16% spike.

Still, Papa John's is benefiting from many of the trends that have helped strengthen Domino's business over the last few years and helps these chains stand out as winners in a tough casual-dining landscape. More than half of Papa John's sales are now generated through digital sources, for example, which is right in line with Domino's ratio.

Now what: Looking ahead, Papa John's is on track to generate as much as $2.40 per share this year, for a 15% boost over last year's result. By comparison, consensus estimates call for Domino's to boost earnings by 6%.

Meanwhile, Papa John's comps are targeted to improve by 3% in the key U.S. market even as the company pours resources into expanding internationally. Executives aim to add 200 new locations to the store base in 2016, 75% of which will be in international markets.