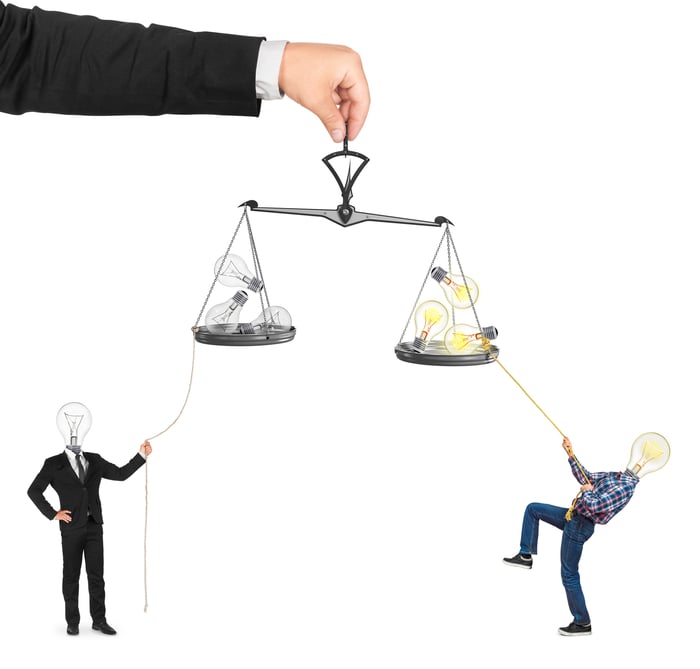 Tiny clinical-stage Anavex Life Sciences Corp (NASDAQ:AVXL) recently uplisted from the wild-west of the pink sheets, and its stock price swings since then have been more violent than most western films.

Despite the swings, the stock is up over 219% over the past year. It's enormous industry peer, Biogen (NASDAQ:BIIB) is down more than 30% over the same period, slightly underperforming the iShares Nasdaq Biotechnology index (NASDAQ:IBB), of which Anavex is not a member.

Both companies share a focus on neurology, and have devoted a sizable proportion of their resources developing candidates for the large, under-served population of Alzheimer's disease patients. More than 5 million Americans are living with the disease at an estimated to cost of more than $200 million this year.

There are no approved therapies that effectively slow progression of the disease, and the first could become the best selling drug of its time. With this in mind let's take a closer look at Anavex and Biogen, to see which of these Alzheimer's hopefuls is a better buy.

Market saturation, and the FDA's addition of an opportunistic, and deadly, brain infection to the warnings section of Tecfidera's prescription label readjusted its trajectory, and first quarter sales this year were "only" 14.6% higher than the same period last year (before the brain infection association), putting this drug on an annualized run rate of about $3.8 billion. 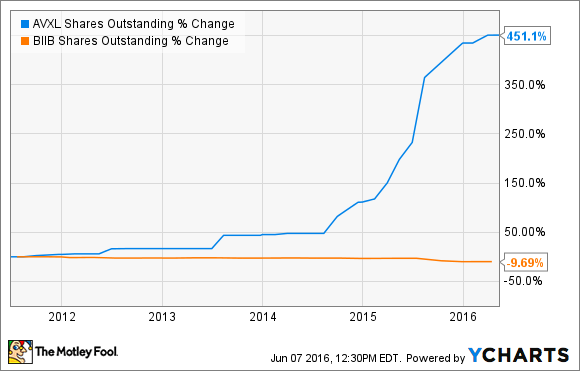 Anavex on the other hand is in the clinical stage, something you want to look for when buying a biotech stock, which means it has nothing to sell but its own stock. Those sales have skyrocketed over the past several quarters.

Although the 5-year timeline in the above chart suggests its share count has leveled off recently, they grew 3.06% from 34.65 million at the end of 2015 to 35.71 million at the end of March. Even at this rate you're slice of any potential profits, would dwindle quickly before this company has any chance of returning any.

Anavex is sponsoring just one product in clinical trials. Named 2-73 it acts on sigma receptors, and is thought to restore an important association between intracellular components that often exhibit disruption found in many neurodegenerative diseases.

Following five weeks of treatment with 2-73, patients showed statistically significant improvement on two of six cognitive tests. Anecdotes of a patients regaining the ability to play piano and other skills after longer treatment was encouraging, but the company didn't include a placebo group in the 32-patient trial. Without a control group for comparison, regulatory agencies can't distinguish between real efficacy or placebo effect.

Biogen on the other hand included placebo group in its phase 1 trial with aducanumab for treatment of Alzheimer's disease. Although, the main purpose of phase 1 trials are to determine a safe dosage, they also provide some confidence before undertaking much larger trials currently under way. Positive, but mixed, results announced last March and July were encouraging enough that Biogen began enrolling patients in two global phase 3 studies last September with a combined 2,700 patients.

While this trial is enormous, through extensive partnerships throughout the industry, Biogen has three additional drugs in phase 3 for various indications, and more than a dozen in mid-stage clinical development. Anavex has yet to sponsor a clinical trial beyond phase 2 studies with 2-73 in Alzheimer's.

This April, Anavex referenced guidance issued by the FDA in 1999, and a draft guidance the Agency published in 2010, to suggest it can conduct a "more efficient study than conventional studies, optimizing trial parameters for Phase 3 success," but has yet to announce when such a trial might begin.

No matter how well optimized Anavex's phase 3 trial is, without a partner I don't see how it can conduct one with its available resources. It finished March with total assets of just $12.11 million, $11.95 million of which were in the form of cash.

With nothing to sell but its own shares, I don't see how it will fund even a modest trial. The company doesn't even conduct post-earnings release conference calls with investment bank analysts, so the odds of raising enough equity through sales to institutions are pretty slim.

Last December the SEC issued Anavex a subpoena, and is conducting a formal investigation. When the company filed its latest financial report on May 11, it was still cooperating with the SEC in the investigation and was unable to predict when the matter would be resolved.

Although Biogen's recently announced failure with experimental neuroreparitive therapy, opicinumab, is a kick in the pants, the important thing to remember is that this company was generating enough cash with to fund the trial in the first place. Not only that, Biogen has multiple promising drugs in its pipeline that are fairly far along in trials. For example, Biogen is in partnership with Ionis to develop nusinersin, a treatment for spinal muscular atrophy, which could actually cure this leading genetic cause of infant mortality. The drug is currently in phase 3 trials.

A recent boost in royalties Biogen receives from Roche, and some stock repurchases drove first quarter earnings up to $4.43 per share, a whopping 27% increase over the same period last year.

Call me crazy, but I think Biogen's ability to continue shooting for the moon, without danger of becoming insolvent, or even unprofitable, in the years ahead makes it the better buy, without question.