Stocks spent the entire day in negative territory and, despite a climb that erased almost all of their losses, ended lower on Thursday for the first daily drop of the week. 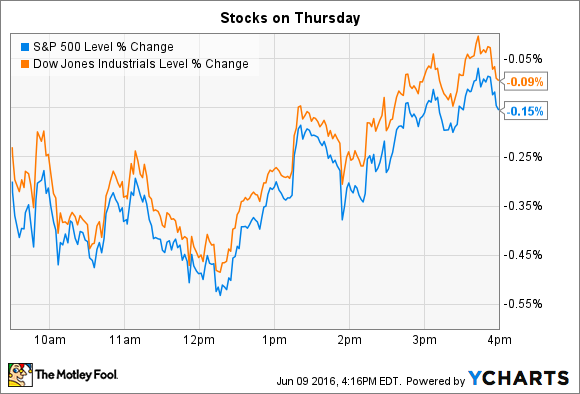 In economic news, initial jobless claims ticked down by 4,000 to 264,000, according to the government, which points to continued underlying strength in the job market despite a surprisingly weak month of payroll growth in May.

J.M. Smucker was the S&P 500's top mover, rising 8% to set a new all-time high following a strong quarterly earnings report. The packaged foods giant's revenue spiked by 25% in fiscal Q4 thanks mainly to the contribution of a newly acquired pet food brand. The true bright spot, though, was Smucker's booming coffee business, which helped it trounce consensus earnings estimates (profit came in at $1.86 per share compared to the $1.20 analysts were targeting).

Executives sounded equally confident that the new fiscal year will bring solid growth driven by product innovations, marketing around the 2016 Olympic Games, and cost cuts. The company projected earning $7.67 per share at the midpoint of guidance on a slight decline in net sales.

Luxury furniture specialist Restoration Hardware sank 21% after posting a surprise net loss for its fiscal first quarter. The company also sliced its profit guidance for the year ahead as a number of costly issues are combining to pull down its earnings power.

For the quarter that just closed, revenue rose by a solid 7% to hit consensus Wall Street estimates. However, costs ran higher across a few expensive initiatives, including investments in the stores and production delays around the new RH Modern concept launch. As a result, expenses ate up an elevated portion of earnings, and profit margin dove into negative territory from 2% last year.

Executives said they expect many of these expenses to be short term -- but they'll add up to $1 per share hit to this year's profit. Meanwhile, CEO Gary Friedman warned about "uncertainty" around the financial impact of RH's pivot away from a promotion model to a membership sales approach:

We are learning that the selling cycle with members is longer, as transactions are not closed with the urgency of artificially imposed sale deadlines, and the timing of recognizing membership revenues will put pressure on margins in the short term.

Executives believe the switch will eventually turn out to be a positive. On the other hand, it's clear that the furniture retailer faces several major operating challenges in addition to general weakness in the luxury segment of the market. Without a clear picture on the businesses' sales and profit growth outlook, it's understandable that many investors chose to take a step back from the stock on Thursday.